Voces Bolivianas: A year of success

We have some encouraging news from Bolivia. Eduardo Ávila of the Voces Bolivianas (Bolivian voices), a Rising Voices grantee looks back at the successful journey it had in the past year. The pilot program of Voces Bolivianas took place at a cyber-cafe in the city of El Alto last September. Since then Voces Bolivianas blog outreach workshops spread out and reached almost two third of the country.

Their long list of achievements can be found in a self-assessment post in their project blog. The notable successes among them are:

What is the team's strength? Eduardo says its “the commitment and passion of team members who believe in the mission of spreading the use of citizen media to underrepresented groups.” and why did it ran so long (still is running)? Because, “even though the initial grant money from Rising Voices completed in March, team members continued with tasks and initiatives in their free time.”

Success depends on the support of other people. The Voces Bolivianas team deserves much applause for overcoming these hurdles with their exemplary efforts and these prompted others like local bloggers to support them. Lack of teaching materials and insufficient fund did not stop them from running. Instead they found innovative ways like selling locally produced laptop bags to raise funds. You can also support their cause and own this beautiful piece of handicraft.

The 2nd annual national bloggers conference called Bloguivianos [es] took place in El Alto and La Paz cities on 29th-30th of August, 2008. A barcamp was also included in the event and Voces Bolivianas team were in charge of the event.

The conference ended successfully with 83 participants and in the Barcamp 16 bloggers showcased their projects and ideas. Here is the timeline of the event. 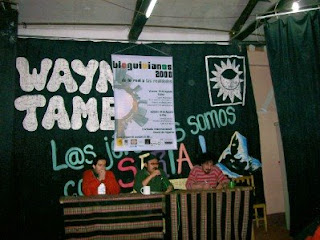 Hugo Miranda terms it reality of the realities. Here is a list of blogs who wrote about their experience in this Blog Conference. Here is a podcast on the conference (in Spanish). 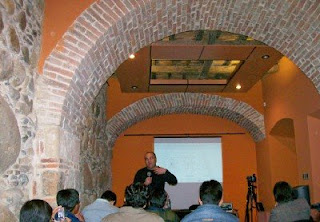 During his presentation on the panel of Digital Literacy, he explained how his community lacks electricity, much less internet. However, he conveyed the importance of maintaining his blog, as it has become a two-way window to the rest of the world.

Sandy wrote in a previous post in his blog:

Blogs definitely break the barriers to racial and ethnic bias across the world, mainly in our country Bolivia.

And what perfect example other than this below can support Sandy's statement?

Cristina Quisbert, the bold voice of Bolivian indigenous people and a participant of the Voces Bolivianas program tells the world through her blog that the racism against indigenous people has come back in Bolivia:

On May 24, also in the city of Sucre, they ..attacked indigenous people, humiliated and beaten up to abuse, enjoying impunity the local authorities allowed them.

We must remember that 63% of the Bolivian population is identified as belonging to one of the 36 indigenous peoples in Bolivia and historically, they are ancestral lands of indigenous origin. However, …some scrupulous people ….still think that being a bit more white or having a surname that does not sound as indigenous is synonymous with superiority compared to what is brown or has an indigenous name. (machine translation)

Because of the efforts of Voces Bolivianas the indigenous people in Bolivia have a voice now and can fight for their rights and be vocal against discrimination.