In 1998 36-year-old Gugu Dlamini was stoned to death by several men in Kwa Mashu, a township of Durban, South Africa. Before her death, she had publicly declared her HIV positive status at an AIDS awareness gathering. Many believe that her death was the direct result of her breaking the silence about her illness.

In hopes of preventing such tragedies, the Kwa Mashu Community Advancement Project (K-CAP) will be training 15 to 20 youth from the township in the upcoming months to become citizen journalists reporting on local health issues, particularly those related to HIV/AIDS. Roughly 5.7 million people in South Africa are living with HIV and 350,000 people died of the disease last year. This project is one of the six new health-focused citizen media outreach projects that were announced in June by Rising Voices and Open Society Institute’s Health Media Initiative.

Edmund Mhlongo, the project's leader, explains the inspiration for this project:

Kwa Mashu, a township north of Durban, is the largest and older of the three townships in the area. It was formed by the apartheid state, which separated people according to their race, in 1958. The film, Still My Home, is being made in conjunction with K-CAP and looks at the history of this township. Mhlongo further describes his community:

It is one of the poorest areas in Durban where the unemployment rate amongst youth is estimated to be about 60 percent. The township has a population of between 800,000 and one million people. There are still many people staying in informal settlements surrounding Kwa Mashu. Kwa Mashu itself is a wonderful place with lots of energetic people full of life and positive about the new South Africa. The new government is in the process of developing Kwa Mashu as a better place. K-CAP, which operates out of the Ekhaya Multi-Arts Centre, has been playing an active role in trying to make Kwa Mashu a better place since it was founded in October 1993. The organization strives to empower disadvantaged youth by teaching them integrated arts and multimedia skills, which increase the youth's knowledge and career opportunities and hopefully encourages them to make more positive life changes. The organization runs five integrated arts programs for about 300 youth who are mostly in their teens (ages 12 to 23). Through these programs they produce a quarterly print newsletter called Just Don't, which is distributed to 10,000 youth in Kwa Mashu's schools, and run an annual film festival, which features youth-produced documentaries.

It is in their Ekhaya Imagination Lab, where young people are taught multimedia skills, that K-CAP will train 15 to 20 youth to become citizen journalists covering local health issues such as HIV/AIDS. The Lab hasn't used blogs or podcasts in the past, with many youth using MySpace to share their stories instead. However, this new project will allow for the use of more forms of multimedia, as the youth will be taught how to blog about health issues and be encouraged to post their stories online. Mhlongo says they hope to create a special Web site to post these stories. The stories will be featured in K-CAP's newsletter as well. The youth will also use multimedia to create posters on HIV/AIDS and to develop short animations about breaking the silence of HIV/AIDS. It is hoped that this project will help raise awareness about HIV/AIDS among the youth of Kwa Mashu, encourage discussion about the issue, help prevent the spread of HIV/AIDS by providing access to appropriate information, and help break down barriers. Mhlongo says there are real barriers to lowering HIV rates in Kwa Mashu.

There is still a fear of the unknown where youth are scared to even do testing, let alone talk about their status. Only female youth who get pregnant get tested for HIV and nobody knows the real status of HIV positive males in Kwa Mashu and in South Africa generally.

However, he adds that citizen media may be one of the best vehicles for getting the youth in the community to talk openly about HIV/AIDS and hopefully combat the fears and stigma surrounding the disease.

Many youth today have access to Internet and it is becoming a powerful communication tool – easier to use and send messages direct. Not many people know the challenges faced by youth in Kwa Mashu on issues relating to HIV/AIDS.

The youth at K-CAP are currently being familiarized with the use of computers and the Internet. Next the media tutors will teach them how to use cameras, so they can capture images that also tell their stories. 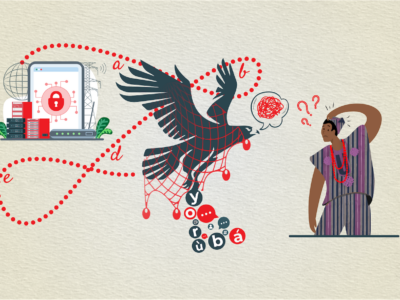