Álvaro Ramírez, Associate Professor of Social Communication at the University of Bergen and co-founder of HiperBarrio went to Rome to participate in the Annual Conference of Community Informatics. He writes [sp]:

This conference brought together one hundred scholars and activists involved in the issue of ownership of new media and ICTs by groups that do not have the ease, the economic social or motivational resources, to access them.

The Colombian Ricardo Gomez, a professor at the University of Washington presented the first results of an interesting research, which he heads, in 25 countries in the world, collecting information about the way people access and use computers and information in public places such as libraries, Internet cafes and tele-centers. (machine translation)

He talks about his presentation:

It was nice to share with those colleagues with whom I shared similar interests and fascinating works. 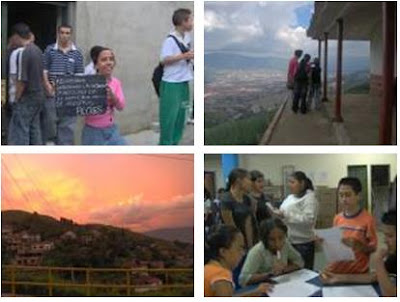 Gabriel Jaime Vanegas Montoya, Librarian of Public Library of San Javier – La Loma writes at Cadaunadas a beautiful article on the works of Hiperbarrio. Some excerpts:

The most valuable is that we now have a community that found a place from which to access the global world, where we can express ourselves and hence social projects with a credible image, innovative and visionary. [..]

Our views will no longer pass through the recognition or approval of the traditional means of communication or the same state, obey no special interests, citizens are now more autonomous, more aware and involved with the public, with the construction of our destiny through participation in areas of local government. At any time changes our vision of the world, at the time that we become one with cyberspace, we learn in community and fills us with a lot of questions we are trying to respond in the midst of difficulties. (machine translation – original in Spanish here)

Catalina Restrepo writes in Convergentes blog on a recent workshop where she learned about the social networking tool Delicious.

Catalina made one video with Argos on La Loma and posts in her blog:

“In this neighborhood, in my neighborhood, that pace is a symbol of partying, parranda, union … And that is why I decided to take up the challenge of “mixing” audio and image, so once again, reflect the everyday life of a community that today has a lot to show.”

Here is a highlight in ConVerGentes blog of some posts from the blogs of the Hiperbarrio members and participants [sp].

You will find more blogs in the blogrolls of Hiperbarrio and ConVerGentes.