Kathy Ward started to post daily on the issues relating to the violence against women. Taslima mobilized the Nari Jibon bloggers for the cause:

Today Nari Jibon blogger have participated in this day's action with other women all over the world. I discussed with them about this international day to end violence against women. Nari Jibon bloggers will share their stories and thoughts which will be posted in Nari Jibon blogsite.

Let us hear the voices of the Nari Jibon bloggers on this important issue.

Fatema Tuj Zohura Shimu is against the tradition of early marriage and thinks that it is also a kind of violence against women.

Pretty Ahamed writes about eve teasing and the perils of women going out alone:

She also writes an interesting thing about eve teasing:

I can’t understand that if any sister is teased by any boy, then a brother gets angry. But if he teases to other girls then he doesn’t think that his sister can be teased like this way.

Afroza Akter Athoy also talks about eve teasing and the inability of women to stop these:

Recently I saw a girl was walking on the road. Some boys were following that girl and passed bad comments. I felt bad but couldn’t do anything. Reshmi Akter Jui writes about gender discrimination and terms it a violation against women:

In our country boys and girls should be equal. But boys get more facilities than girls. The girls are deprived from their rights in every steps of their entire life.

Some parents think that– The boys need to eat more than girls. Because they earn money by working hard. But why don’t they think that– the girls also manage the house-hold affairs and other family members, like– cooking, cleaning, washing cloths-dish-plates, take caring of children, husband, in-laws etc. Beside that they can manage official jobs. But they do not get their energy label by food from their families in childhood.

Selina Akter Zeba reminds that many women and girls are victim of violence by her husband, boyfriend or in-laws.

Aklima Akter Nipa also gives examples about the abuse of women by her husband or lover.

Afrin sheds a light on the acid throwing menace in the country.

Tondra thinks men are the big hurdle against establishing rights for women:

The development of women is like a challenge for men. Still women can’t get their rights.

Our society’s educated men think, they are better than women. … But they don’t know when they show their manly traits they lose their humanity. They are like illiterate men though they are literate.

Hira spells out the hard truth:

Violence and abuse affect all kinds of people every day. It doesn't matter what race or culture you come from, how much money you have, how old you are, or if you have a disability.

She also made a logo: 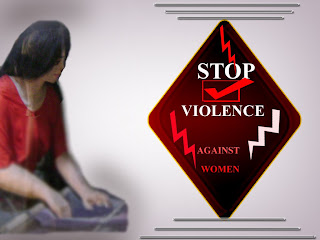 While most of the bloggers echoed solidarity to stop the violence against women, they also wanted the government to do something about it. The fact is that the penal laws of Bangladesh are supposed to protect the women from various forms of violence.

So it is evident that the laws are in place but the implementation mechanism or the awareness of women is missing. The patriarchal society also is a hindrance for women and keeps them from upholding their rights.

Salma Khan, a human rights activist says in one of her papers:

To eliminate violence against women in Bangladesh, one needs to challenge the vested ‘rights’ and ‘roles’ of men and the social control mechanisms that reinforce the superiority of men and subordination of women. The unequal power relations often result in the dominance exercised through violence.

Zannat gives the effective solution, what every women in Bangladesh should do:

Women should not tolerate all the torture on them. They should speak up and gain their rights.