The members of Voces Bolivianas (Bolivian Voices) are delighted to win an honorary mention in the 2009 Prix Ars Electronica awards. This international recognition will certainly boost their enthusiasm towards blogging. They congratulated [es] the Hiperbarrio team for winning the Golden Nica in the digital communication category at the same event.

Rising Voices Director David Sasaki was in El Alto, Bolivia recently to greet the team and talk about the other Rising Voices projects. Mario Duran posts [es] about the 6th of June get together of the Voces Bolivianas. Here are some images.

Some of the Voces Bolivianas members wrote about different events and issues on Bolivia. Here is a quick look at them.

Alberto Medrano writes [es] about the Fiesta de Jesús del Gran Poder (Jesus Almighty), one of the larges celebrations in Bolivia outside the Carnival. About 58 groups participate in this parade starting in the neighborhood called Cementerio dancing kilometers and kilometers until to arrive to downtown. It generally starts early in the morning about 7:00am. and ends 2:00am. on Sunday. Each group of dancers aproximately dances about five or six hours from the beginning until the end of the route.

Here is a video of the celebrations:

Hugo Miranda posted [es] the twitter messages and pictures uploaded by one of his friends @alvaromendez reporting the birth of his son Miguelito. 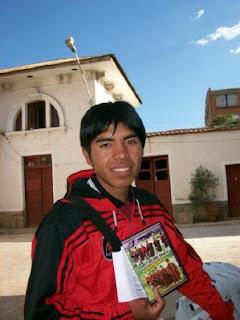 With Bolivian Voices in late January this year we were able to find bloggers and bloggers of various cities in Bolivia Bolivian Voices Summit. Among them I had the fortune to meet Limachi Sabino, a member of the Puka Puka, Tarabuco in the department of Chuquisaca. On that occasion I commented on the music project that had begun with other young people from that community to form the group quechua de los Andes Puriy. Sometimes the distance or circumstances make initiatives like the community of Sabino remain invisible. However, we can put our bit to help this musical talent to proceed. The contact information for them is in the blog Progressive Indian.

Christina also writes about the descendants of Africans who arrived to South Americas during colonial times.

Rock Boliviano [es] continues to portray the rock scene of Bolivia. The blogger writes about a concert in Hernando Siles stadium, which is scheduled to take place today:

Concert JUNTUCHA arises from the need to support, disseminate and publicize the new Bolivian musicians. On this occasion of its 5th year celebrations 22 bands will perform on Saturday, June 13, 2009.