Voces Bolivianas: From The Blogosphere

In our latest feature on Voces Bolivianas, the Rising Voices grantee from Bolivia, we will highlight some blogposts from its network of bloggers.

Cristina Quisbert at Bolivia Indigena writes about a protest March by indigenous Bolivians:

Earlier last week began a march of Indigenous people on the way to La Paz, whose main demand was indigenous autonomy. About 500 marchers set off from different places like Trinidad, Beni. [machine translation] Mario Duran also highlights the blog of Yerba Mala Cartonera, a writers community project, which publishes books of new young authors who cannot find the space for the their publication. The book covers are made of aesthetic cardboards and made by young recyclers.

RC – The entrance to the literary elite Bolivian becomes very difficult for young Bolivians writers, and more coming from El Alto. The Bolivian literary circle feeds on itself, it works with the old system of patronage and almost no attention has been paid to the project Yerba Mala Cartonera. However, I feel that somehow, Yerba Mala has begun to annoy those closed circles, and they have become concerned. They realize that in El Alto has begun to generate other literature. (read more) [machine translation]

Hugo Miranda celebrates publishing of 50,000 Tweets in his Twitter account @angelcaido666x – this is surely a feat. On this occasion he interviewed Graciela Ventimiglia, a bio technology professor and a blogger and a prolific Twitter user of Latin America. 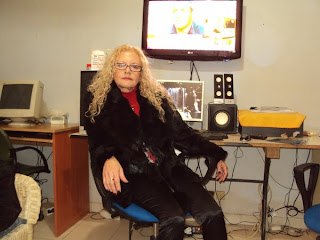 “Graciela Ventimiglia, surely retweets people more, if their tweets are fun, and contains interesting information, because it teaches us things …Finally the interview with her is posted here.”

First Why the name graciadelcielo?
This is what my name means. Later I found out it was a little long, but it was too late to change it.
Who is Graciela Ventimiglia? What she does? What are you
I am 53 years old, the only daughter in charge of my two elderly parents. I am divorced with two daughters, Marisol (25) and Maribel (22), remarried with #husband with whom we adopted a baby (of 17 days): Marilis, now 6.
How long and why you use Twitter?
I am using Twitter since January 2008 and at first did not know what to do there. Without knowing, @laquesefue prompted my desire to follow, was my mentor for much of my personality teaching, even though she is a Social Media evangelist and I am not. But she admired my way and helped me a lot when I had only three followers.