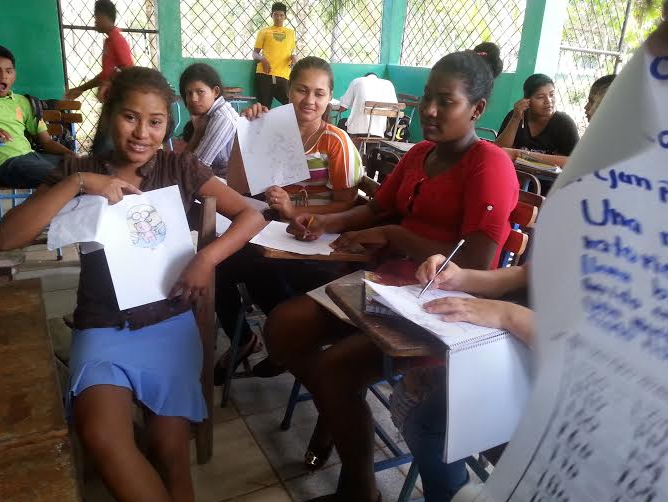 Students at the leadership school at URACCAN University.

This is the first post from the project “Miskitus and Mayangnas on the internet”, grantee winner of the 2015 Microgrant call to support digital activism initiatives for indigenous languages. The project is being carried out in Nicaragua, and seeks to strengthen local languages with the active participation of young people.

In the beginning, the project “Miskitus and Mayangnas on the Internet” consisted of a series of three workshops and two forums which focused on the creation of personalised media platforms for young people. Three workshops focused on students from the leadership school of URACCAN [1] University, on the Atlantic coast of Nicaragua. There are 51 leadership students, ranging from ages 13 to 18. Most of the leadership students speak Miskitu although some are learning Mayangna, and there are some who prefer to speak Spanish and Nicaraguan English Creole.

The three original workshops included video editing, the construction of a digital dictionary, and an introduction to web design. All the projects had to include a bilingual component using both Spanish and an indigenous language (Miskitu or Mayangna). However, upon meeting with the new director of the Leadership School of URACCAN University, it became clear that the young people would need a Digital Media course instead of just three workshops in a month. The Director explained that many organisations and individuals from outside Nicaragua had come to offer workshops to the youth leadership students and they felt that the temporary interaction was not beneficial for their academic development.

We started to develop lesson plans including 3 different bilingual videos, 1 bilingual dictionary with 50 entries, and a bilingual website to show each of the students’ videos and dictionaries. URACCAN University offered to let the leadership students use 2 public computing labs that have internet access and the software MovieMaker [2], WeSay [3] and Wix.com [4].

The first day of the new course “Digital Media” introduced all the projects and software that would be used throughout the course. The leadership students were able to explain their favourite hobbies, such as listening to music, playing sports and dancing. These turned into the topics for some of the videos. The students also enjoyed a traditional snack called “wabul [5]“, which in this case is made of ripe plantain.

The second “Digital Media” class consisted of a workshop where the students were able to go out onto the street and take photos of themselves individually and in groups. All the students used cellphones, smartphones and tablets to practice taking pictures in vertical and horizontal orientations.

After taking the photos there was a short demonstration of how to upload the photos to a computer. The third “Digital Media” class began in the classroom outside of the leadership students’ dormitory, which includes a whiteboard. The lesson focused on how to make a script using the photos they took of each other during the previous course. The students learned how to include a title, a series of scenes with subtitles in Miskito or Mayangna, and credits.

The leadership students enjoyed a snack in Nicaragua's Creole community which is called “Pati [6]” and a small drink before entering the computing lab for the first time. The fourth “Digital Media” class took place inside a computing lab called “Lakia Tara” or “Big Star” in Miskitu.

The leadership students worked in groups to upload their own photos and favourite music from their cellphones, smartphones and tablets. Most students were able to complete videos using a succession of photos, subtitles and music that tells a story about them and their families. The fourth class took place in the classroom outside their dormitory again, and included a presentation on the possibility of using illustrations to create a digital oral story. The leadership students saw an example of a digital story on Youtube. Then they began to develop their own illustrated stories, some based on animations, some based on Kisi nani [7] (oral children's stories in Miskito) or popular stories in Mayangna bilingual texts.

At this point the leadership students were very happy to go back to Lakia Tara to upload the illustrations for their projects and finalise the first video projects that they have made for themselves, their classmates and their families. 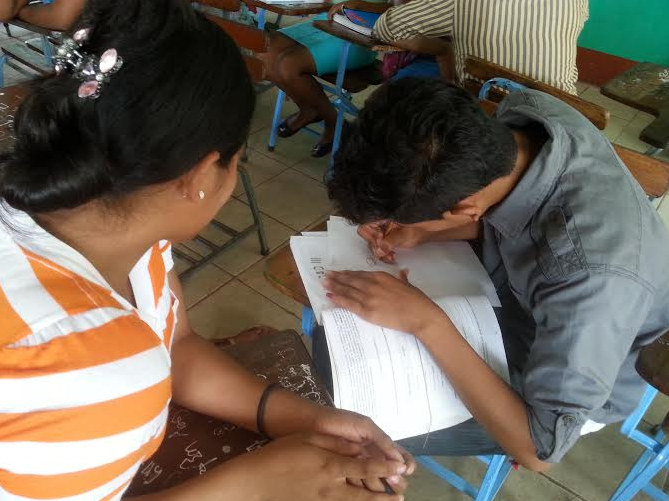 Students working at the leadership school at URACCAN University.