One Children's Song, Translated Into Australia's Many Local Languages

Languages and cultures may differ, but the joyful sound of children singing is universal. A song called “Marrin Gamu,” created for primary school children and teachers to promote the diversity and beauty of Australia's Aboriginal and Torres Strait Islander languages, is proving just that.

The song is also the basis of a friendly contest organized by First Languages Australia and ABC Splash. First, communities are invited to teach local children the lyrics in English.

Then once the children know the song, the community is asked to translate the lyrics into their own native language. Finally, the community and school work together to create a video to be uploaded to the competition website.

The Marrin Gamu website provides an example to help get teachers and students started. Also included in the website is a range of Australian curriculum-linked classroom activities developed around the project. Conversation starter questions are suggested as a way to facilitate discussions with students about their language:

Questions for the class:

The project will run for the next two years so that all schools have time to develop the necessary relationships to participate in the project. Contest organizers hope to see “Marrin Gamu” sung in many of Australia’s hundreds of first languages.

“Marrin Gamu” fits into a broader strategy to prevent language loss by focusing on schools and students and working with local teachers. Many teachers do not have deep knowledge of these languages, so the website shares cross-curricular programs for use in the classroom. Incorporating an element of digital media and the internet may motivate students when they see their creativity and local language reflected online. 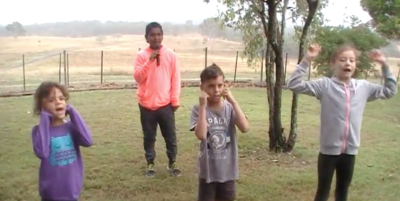 The first submission is a video created by a school in Queensland in which students sing “Marrin Gamu” in the Guarang language. As more videos of the song are submitted, we'll be sharing them here.