HiviSasa, Swahili for “right now”, is a Kenyan digital media project publishing news and photos from citizen reporters who are paid via M-Pesa, a mobile payment system, for every article published. Some citizen reporters, according to the site, earn up to about US $85 per week.

The project also awards writers whose articles attract the highest number of pageviews with cash prize every week. 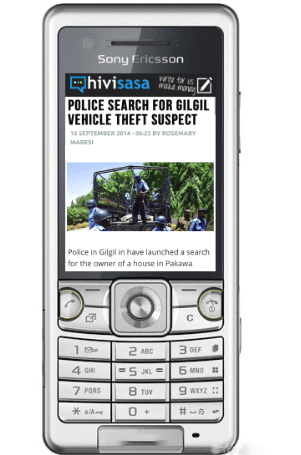 HiviSasa as seen on a mobile phone. Creative Commons image by Jakobbarnwell.

Registration to be a contributor for the site takes less than a minute and one does not need to be a trained journalist to write for HiviSasa:

You can be a professional, an organisation, a student, a government officer, a politician, a concerned citizen, a cartoonist, a businessman, a bystander… etc. Also, many trained journalists also contribute, which increases their skills and online exposure.

Write a 200-words news story (or submit a new photo with a short description) answering the questions: What event? Where and when did it happen? Who was involved? How did the event occur? Why is it noteworthy?

The site has identified three examples of good local stories for new writers. One of the stories is about a Kenyan man, Lawrence Gekonge, who buried his wife in the kitchen after she passed away because she used to spend most of her time there.The man says that he should be buried in the sitting room of the main house when he dies.

The second story is about citizen reporter, Dickens Luvanda, who has managed to consistently publish over 50 stories a week. The third one is about 1,200 title deeds lying uncollected at the Lands Registry.

The project's lead editor Enoch Nyariki told Global Voices in an email conversation that the site has so far published 61,000 stories. He said that one of the main challenges the project is facing is having citizen reporters take advantage of free HiviSasa Academy they have set up to empower reporters with basic news writing skills.

The YouTube video below is an introduction to the academy in Sheng, a mixture of Swahili and English:

Piloted in 2012 with the support of 88mph, which invests in start-ups, the project was launched in January 2014. Other investors in the project are Omidyar Network and Novastar Ventures.