Ha'e Kuera Ñande Kuera: Reggae and Hip-Hop Expanding the Guarani Culture by Dialoguing With the World 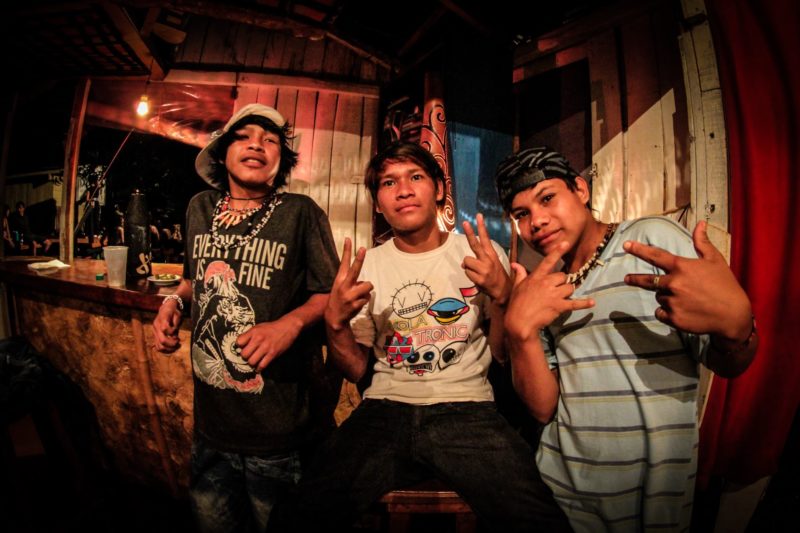 The group Ha'e Kuera Ñande Kuera. Photo shared by the musicians on their public Facebook page.

Fortín Mbororé is found in the region of los Saltos and Cascadas in the Misiones Province of northeastern Argentina. The village was created in 1985 and has a population of about 1,126 people who identify themselves as the Mbya Guarani people. It was within this community, which shares borders with Brazil and Paraguay, where a group of young people fused their concerns and demands with hip-hop and reggae sung in Guarani as well as Spanish and Portuguese.

This group is a trio called Ha'e Kuera Ñande Kuera, which in Spanish means “ustedes y nosotros,” or “you and us.” Its members are Juan Chamorro, Fabián Velázquez and Hilario Benítez, accompanied by a band of musicians bound together by this project.

The trio started in 2013, and in them converged three languages and two cultures. The group also mix traditional instruments with the saxophone, bass, drum, and electric guitar. The youths felt attracted to hip-hop and reggae because of its high protest content and hopes for social justice. This is how the Misiones Online reviews them in a note about Ha'e Kuera Ñande Kuera's participation in the 13th Conference of the National Network of Alternative Media:

The group gained popularity due to their songs, which convey the sadness they feel at seeing their culture being lost, ending up with increasingly less land, and always struggling to produce sustenance from nature.

In the last decade, mass media has reported the problems that afflict the Mbya community of Misiones. The headlines are alarming. Malnutrition and respiratory problems appear to be the most common ailments for Guarani children and youth. The community is faced with problems of malnutrition, of infant mortality, of exclusion and poverty and what's more, the threat of their own ethnic group's silent extinction.

Added to this is the penetration and intervention of lands in ways that threaten the community and cause forced displacements to the cities.

Ha'e Kuera Ñande Kuera's lyrics feed on the reality in which its members live. In this context, reggae and hip-hop, global music genres, open up a channel of communication that allows them to go further than the Guarani cultural boundaries and to reach the Creole population with a message of protest and awareness. At the same time, the use of the Guarani language in their songs awakens the interest of Mbyan youths, who find a voice by which to express their local maladies.

Ha'e Kuera Ñande Kuera's official Facebook page has allowed interaction between the musicians, their followers, and those interested in the group. With it they have generated discussions about the appropriation of global cultural products by other indigenous groups. There is no shortage of opinions that support the belief that the natives should be kept in a Utopian state of purity and isolation in order to be considered that way by the rest of society. The young people who make up Ha'e Kuera Ñande Kuera, however, have a very clear opinion about their own identity and the ways in which diversity and contact with other cultures enrich them.

In short, the group represents the cultural consequence of various processes that contrast and interact within the musical genres that have influenced them up to now. As such, the music presents itself as a negotiation space in which urgent matters escape from the shadows and youths create a global community with cultural influences that, far from weakening them, strengthen them.