This is the fifth article about the “Miskito and Mayangna on the Internet” project, grantee winner of the 2015 Microgrant call to support digital activism initiatives for indigenous languages. The project is being carried out in Nicaragua and seeks to strengthen local languages with the active participation of young people.

At the end of the project “Miskito and Mayangna on the Internet,” the students of the Leadership School organized two forums to show their final results to the students and professors at the University of the Autonomous Regions of the Nicaraguan Caribbean Coast (URACCAN).

During the first forum exclusively for the Leadership School, three videos were shown: “AIDS wal iwanka“, “Bullying“, and “Racial Discrimination“. The screening was followed by a discussion about the topics of the videos and how they relate to sociology and psychology, as well as the importance of the use of the Miskito and Mayangna languages by the new generations in the surrounding communities on the Caribbean North Coast of Nicaragua.

In this first forum students answered questions about the importance of multimedia development in Miskito and Mayangna, as well as the reasons why they chose to focus on issues such as sexually transmitted diseases, bullying, and discrimination among racial groups. At the end of the forum, traditional dances were performed accompanied by Miskito music, and a dinner with traditional food and drinks from the region was offered.

At the second forum, the two trilingual dictionaries were presented: “Yala” and “Slilma Diara Nani Nina“. An animation called “Pamali Painkira” and the project website were also presented. Students at the Leadership School explained that the development of these digital resources in Miskito and Mayangna is important because there have not been any TV entertainment products in these languages yet. In relation to the creation of digital dictionaries, some of the teachers explained that local indigenous languages have traditionally been orally transmitted, so adding sound files for trilingual digital dictionaries would be a way to support the development of orality in these contexts, and also to promote the writing competencies in both languages, as it is done with Spanish and English.

All the students explained their reasons to choose the topics covered in the videos, which in many cases are linked to the real life situations they had observed in their communities. Some student testimonials considered emerging needs:

One student explained that more education about HIV and AIDS was needed in indigenous languages and that she was aware that some of her community members had the virus and had limited access to medical treatment because of the embarrassment associated with contracting the virus. Another student explained that some students who had been bullied on several occasions had committed suicide, so they should do something in the local community to raise awareness about what intimidation means and how to stop this behavior. One of the students in particular was adamant about finishing her animation which focused on busy working parents who did not have much time to spend with their children. She recorded the narration for her animation entirely in Miskito with a little help from her cousin and her instructor. When asked why she chose the topic, she explained that it was something that the young people have to deal with in Bilwi-Puerto Cabezas, where, due to the economic situation with some jobs and low wages, both parents have to work and their children often feel abandoned as a consequence.

In conclusion, the students in the Leadership School were open to discussing new topics after considering situations that affect their own communities. The URACCAN University was a good place to discuss the importance of multimedia resources in indigenous languages, and the injustices that occur in the local and world society from an indigenous point of view. 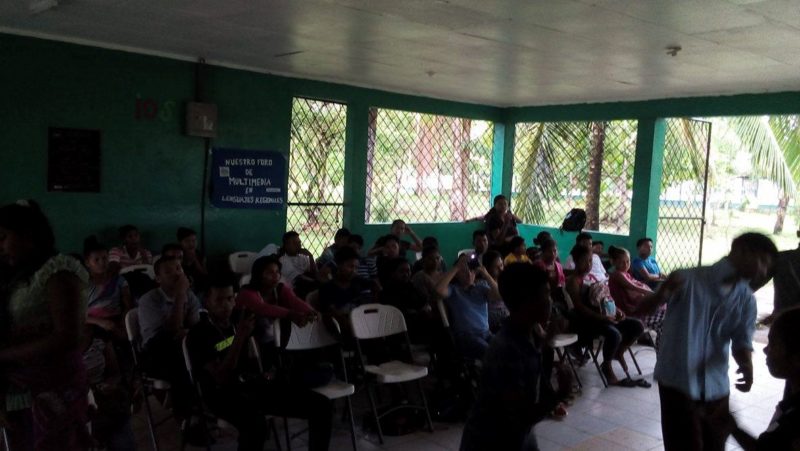 The audience at one of the forums for the presentation of the results of the Leadership School.

Finally, we thank all those who supported achieving the goals set for this digital activism project in Miskito and Mayangna.