How is Online Radio Helping to Empower Visually Impaired People in Armenia? 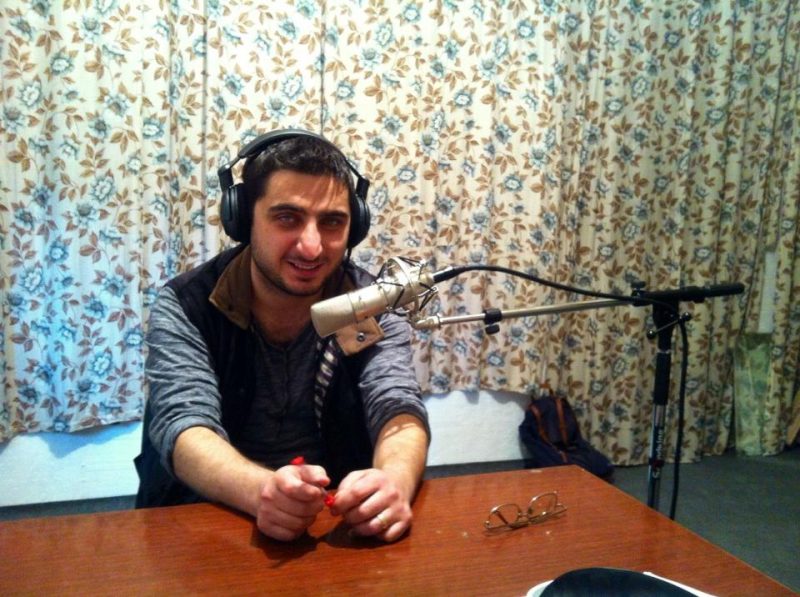 Radio MENQ (meaning ‘we’ in Armenian) is an internet radio station in Armenia made by blind and visually impaired people mainly for listeners in their own and other disabled communities (listen to it here).

Broadcasts cover everything from Paralympic sport and discussions of the lives of Stevie Wonder and Louis Braille, through strategies for using public transport, dealing with stress and depression as a disabled person and winning big in games of chess.

Although the radio station only began working earlier this year, efforts to empower blind people in Armenia through use of the internet, chiefly through initiatives assisted by the Internet Society, have been going on for some time.

Global Voices had the fortune to sit down with leaders of the project and champions of expanding access to information for blind people, Igor Mkrtumyan and Armen Nazaryan, to find out more.

Global Voices: How were visually impaired people treated during the Soviet Union?

Igor Mkrtumyan and Armen Nazaryan: In Soviet times, this category of people was well provided for in terms of social security. The Armenian Society of Blinds (ASB) had significant resources. There were many shops where blind people could work and earn money. They were funded by the ASB, which generated income through these activities of blind and visually impaired people. The ASB was even able to finance the construction of key health care facilities such as the Republican Ophthalmological Center.

ASB invested heavily in the construction of industrial buildings, residential buildings and clubs in order to carry out mass cultural and sporting activities, treat blind people and provide financial assistance. Boarding schools for blind and visually impaired children as well as specialized homes for the disabled were also built. There was a fully functional Culture House in Yerevan (called the Culture House of the Blind).

Currently blind people receive a small living allowance from the state and find it almost impossible to get a job in either the public or the private sectors. The private sector is the quickest to exclude blind applicants, often not even considering their qualifications. But if society rejects the blind, we cannot move forwards. The situation in the US and Europe, where the blind are given the same opportunities as non-disabled people, should be our target.

When the USSR collapsed, the entire system of ASB collapsed as well, because financial resources were generated through cooperation between the Soviet Republics and the goods produced by ASB companies were consumed and used outside Armenia. The ASB was left with only one opportunity — to offer up its premises for rent. Buildings thus either stood idle or were rented out and the overall situation was very sad. The decline in production led to a reduction in jobs for the blind, and a decline in social and cultural work as well. 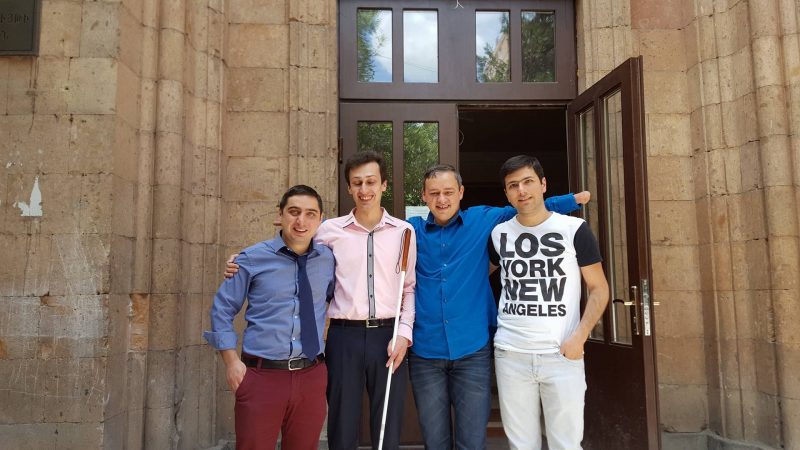 How has the Culture House of the Blind fared since that period?

IM & AN: Changes began when the International Telecommunication Union (ITU) allocated 100,000 USD to create an internet center for blind and visually impaired persons. In November 2011, as part of a joint project of the ITU and the UNESCO Institute of Information Technologies in Education, an internet center was opened in Yerevan. The main goal of the project was to support inclusiveness policies and with the help of information-communication technologies establish an accessible informational-educational environment for people with visual impairments. The center was opened within the framework of the Internet for Blinds project implemented by Ministry of Transport of Armenia, Haypost CSC., UNESCO and the Internet Society of Armenia. The latter provides continuous operational support to the center.

In 2013, the Internet Society of Armenia received a grant from International Internet Society to create a second Internet availability center for people with visual impairment in the Cultural House of the ASB. In parallel, the Armenian Internet Society and administration of the Culture House developed a concept of transformation of the Culture House into a rehabilitation center for people with visual impairments. Three main focus areas for rehabilitation were envisaged: sporting-recreational, cultural and informational. The grant project was successfully completed.

The opening ceremony of the center took place in April 2013. At the end of May 2013, the center was visited by the First Lady of Armenia Mrs. Rita Sargsyan. In September 2013, Mrs. Sargsyan invited the President of Armenians of the Russian Federation Mr. Ara Abrahamyan to visit the center. He got acquainted with the situation there and pledged to support the reconstruction and modernization of the building into a contemporary rehabilitation centre.

While the Internet Availability Center was in operation a group of visually impaired people came forward with the idea of developing Internet Radio. They reported the idea to the ISOC Armenia, which wrote a grant proposal to the Internet Society. Happily the application was approved and work began. Presenters and sound technicians on Radio MENQ are paid a small amount of money as the project is still going on. But mostly work at the radio station is of a voluntary nature and achieved due to contributors’ high motivation. The project ends at the end of 2016 so work will become completely voluntary. Most of the participants have other freelance jobs to help them make their way in life. 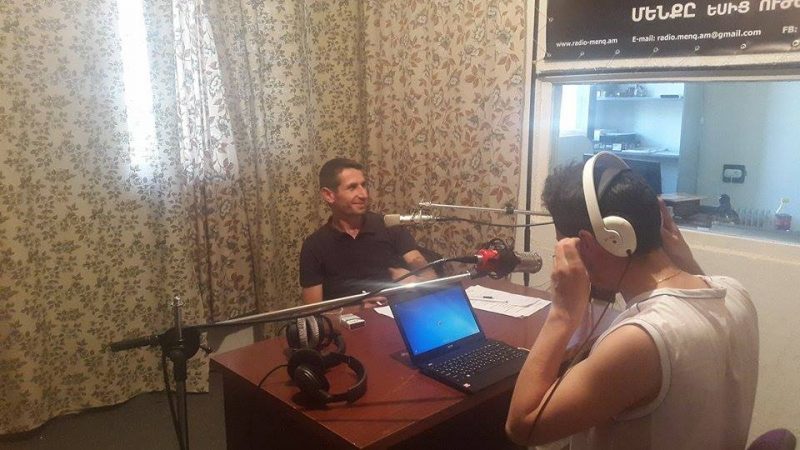 GV: Armenia as a whole faces fairly large unemployment. How can the Internet help solve this problem in the context of blind people and other marginalised groups?

IM & AN: The Internet can serve as a point for startups for blind journalists, translators, programmers, psychologists, lawyers and freelancers in other professions. The Internet opens up new horizons for the blind and allows them to be full members of society. Today the labor market imposes greater demands on blind people, which is correct to some extent, as they must be able to work on a par with others.

Blind people must believe in their own strength and abilities. After Radio MENQ went on air, many have started to want to try themselves out in radio either as a program presenter or a sound technician. Internet radio is becoming a path to new horizons and opportunities for blind people. Often there is a stereotype that the blind person can’t work on an equal footing. Internet work, whether in a freelance capacity or as part of a team, allows you to break down these stereotypes. As mentioned in our project video below, “The internet enables people to be who they choose, to develop for themselves, and as a part of their community.”

GV: Who benefits directly from the online radio project?

IM & AN: More than 45 people have been invited as guests [on the radio] — a substantial number of whom had disabilities — including experts and scientists. The related blog receives up to 2,500 visits monthly. Currently Radio MENQ is hoping to develop an application for phones and tablets that will boost the average daily number of listeners from 10 to 60.

Most important, however, is the work experience blind and visually impaired people have earned through the project. Among a number of examples, one blind man came to us asking to help him work as a sound engineer. We trained him and following training sessions he is fulfilling that role for the station. Many parents of children with disabilities, and students from various universities call us, noting the importance of the radio in their lives, and especially our “Psychology in life”, “You Can” and “Toward Independence” programs.

The blind community has reacted very positively to the fact many blind scientists and artists are featured on the programs. And also, there is the opportunity for Radio MENQ workers to get experience from more famous radio stations like “Radio Van”and “National Radio” which have agreed to provide master classes for staff.

GV: From your work with the Internet Availability Centre and now online radio, do you have any inspiring stories that you could share with GV?

IM & AN: The computer lab and our instructors helped many blind and visually impaired people to learn basic computer skills. In the computer lab we have a monthly show of movies with special audio commentary tracks for blind people. Many people, both blind and non-blind, including students from different universities come to watch these movies. After the showing a discussion of the film is held. The sessions help blind people sense the art of cinema and also foster a positive attitude towards people with visual impairment among normally sighted people.

One very inspiring individual story is that of Levon Karapetyan, a blind pianist who moved around with helpers. He managed to apply for a study period in France and study there. Listening to Radio MENQ's “Toward Independence” broadcast in France he was very interested in some of the tools for self-development mentioned on the program. When he came back to Armenia he visited the Culture House and asked us to teach him how to use the white cane among other things. He received mobility training and a lot of things changed in his life. We are going to prepare a special program devoted to his experience some time in the near future.

Another story involves a young man Artem who has no hands. After listening to the program “Psychology in Life” he became more able to deal with the psychological difficulties connected to his disability. He became socially active and free of complexes. It permitted him to communicate with people more openly. He started to look for a charity program that could provide him a job and found one in Germany.

Our listeners often tell us, “When I feel bad, I listen to your radio, and I get an incentive to overcome my difficulties”, or simply, “You are doing the right thing”.