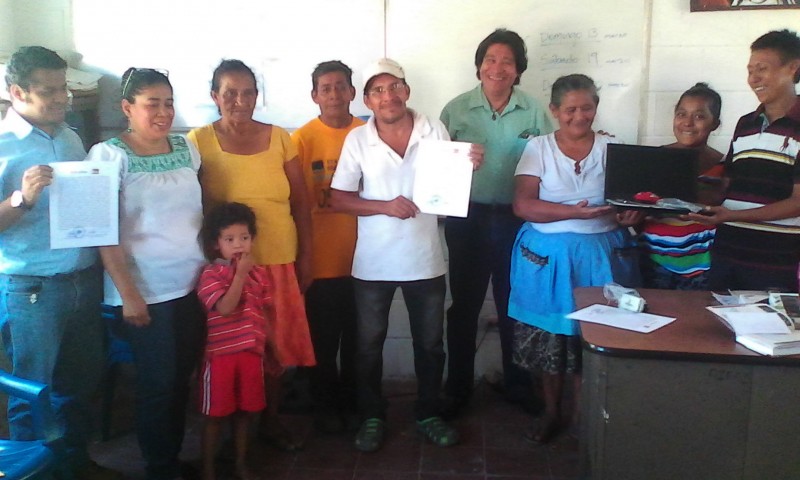 This is the first update on our project, a beneficiary of microgrants for indigenous language digital activism. The grantees who are part of this initiative will write articles highlighting their progress.

On Friday, February 26, 2016, the Salvadoran National Coordinating Indigenous Council (CCNIS, for its initials in Spanish) started an unprecedented process of revitalizing the Potón and Pisbi languages in El Salvador, with the aim to promote the identity of the Lenca and Kakawira peoples through their languages. The project, which is funded by the Rising Voices organization, involves several young indigenous people who develop digital materials for the promotion of languages in their communities, which have traditionally been marginalized. Participants were taught the use of technological tools that will enable them to convert printed language teaching materials into a digital format. In addition, the beneficiaries will be trained in Indigenous Communication strategies and editing programs that will allow them to continue with the rescue, strengthening and revitalization of their native languages.

The CCNIS considers that with the disappearance of unwritten and undocumented languages, humanity would not only lose a great cultural richness, but also ancestral knowledge contained, in particular, in the indigenous languages. In addition, we, the Indigenous Peoples, must meet the new challenges brought by the use of technologies, meaning that we must have a strategy to strengthen and disseminate our cultural practices, our social and community processes, while taking into account that the access to television broadcasting, the development and publication of audiovisual content for indigenous communities is difficult, therefore, inequitable.

There is great potential for the country to know the real situation of the Indigenous Peoples and their cultural and territorial dynamics. This would define the information to which the entire Salvadoran society would have access, but it is important that it does not include “the Indigenous” only as subjects from which to profit, but to respect their right to self-determination. It would also allow us, the Indigenous Peoples, to be the ones who create our own content, as well as to produce and disseminate it on equal terms.

In the Constitution of the Republic of El Salvador, Article 62 says that:

The native languages spoken in the national territory are part of the cultural heritage and shall be preserved, disseminated and respected.

However, there are efforts focused on supporting the Náhuat language of the Náhua Pipil Indigenous People within the state institutions, while leaving in the background the languages of the Lenca (Potón) and Kakawira (Pisbi) Peoples.

Despite having documentation of each Language in the format of educational books, we believe that converting them into digital audio format can strengthen the cultural identity of these Peoples, especially in the context of processes of claiming their own rights, and moreover, since Article 63 in an amendment to the constitution of the republic from June 12, 2014, recognized the presence of the Indigenous Peoples in the country.

According to the United Nations Educational, Scientific and Cultural Organization (UNESCO), it is estimated that half of the 6,000 languages spoken today will disappear by the end of this century. Although approximately 17 percent of the population in El Salvador is Indigenous, there is a lack of public policies to strengthen the cultural identity, languages, and respect for the rights of the Indigenous communities on a national level.

The CCNIS, founded on November 15, 1992, is an organization that brings together 23 Indigenous organizations of the Lencas and Nahua Pipil Indigenous Peoples at the national level. Its work focuses on claiming Indigenous Rights and strengthening the organizational fabric of the community. At the same time, CCNIS is a founding member of the Central American Indigenous Council (CICA).