Creating Memes in the Berrichon-Bourbonnais Language 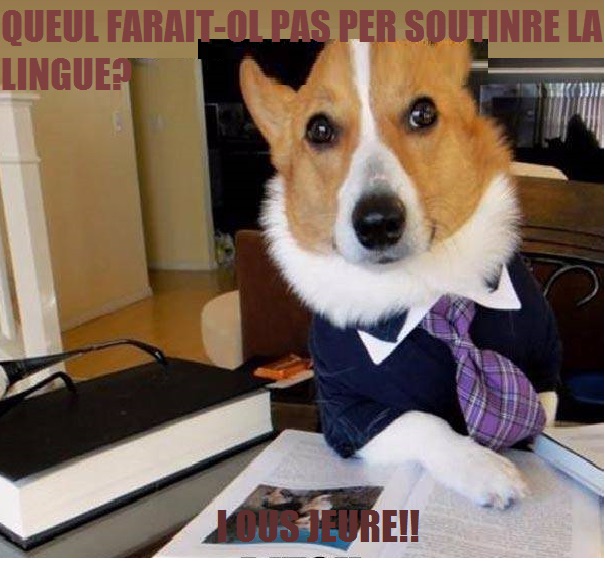 Meme in the Berrichon-Bourbonnais language created by Pierre-Marie Chevreux (Rough translation: “The things I have to go through in order to support my language. Oh gosh, I swear!!”

As a teacher residing in Lyon, France, Pierre’s family can be found in the central provinces of Berry and Bourbonnais, where one might still be able to hear the Berrichon-Bourbonnais language (or Berrichon and Bourbonnais, two variants of the same core language). Traced back to the Middle Ages, where it evolved from Vulgar Latin, Berrichon-Bourbonnais is considered to be a Language of Oïl (as is French). The language can also be found in literature, as many of the characters spoke this language in the novels by writer George Sand. In present day, the language, when spoken, is primarily used by those over the age of 60 years of age, but thankfully there are efforts to revitalize this language.

Now the language is showing up more frequently on the internet. In addition, Pierre opened opened two blogs in a normalized Berrichon-Bourbonnais language, and he is an active participant in the Mother Language Meme Challenge. In an interview with Rising Voices, he talks about his participation in this online activity where he has been sharing his memes on his Twitter account @Persian_Coral.

Pierre-Marie Chevreux (PMC): Passionate people have created many sites where lexicons, sentences, and even some grammatical points have been edited on the net. It is even possible to find some online videos, such as of people counting or performing humorous stand-up comedy. Precisely the situation of the language, which for so long had been called and seen as ‘Bad French’ and the ‘language of isolated peasants’ deals with a kind of creole.

PMC: On Twitter, I noticed a meme in Gallo (another Language of Oïl, but from Eastern Britanny). I have been interested in promoting my language for the past three years, and I wanted to learn and know more about my family language. I think humour can be an excellent way to capture one’s attention. This has also been an occasion to discover some Northern Amerindian languages as Tsimshian (language found along the border between Southern Alaska and the Northern British-Columbia coast) and Asturian (in the Northern-Atlantic Spain).

RV: Who would you like to challenge to create a meme in this language?’

PMC: As social media is a very efficient tribune, this allows my language, Berrichon-Bourbonnais to be known wider as I could have ever imagined. People do not think that France and especially North and Central France have about a twenty of languages! So I want to create curiosity and focus on my peculiar medieval language.