The Stories Behind DACA, the Now-Ended Program for Young Undocumented Immigrants in the US 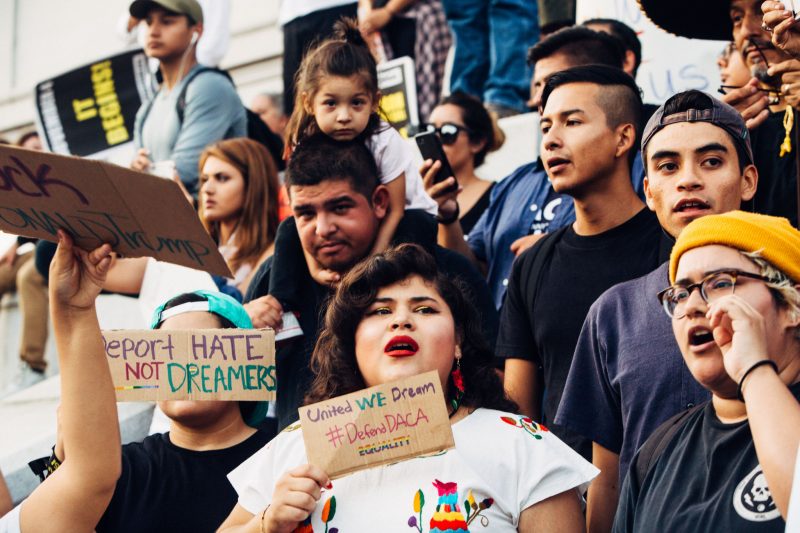 Activists protest the end of DACA in Los Angeles, September 5, 2017. “Deport Hate, Not Dreamers” and “United We Dream/#DefendDACA.” Photo by Molly Adams on Flickr, permission under CC BY 2.0.

United States Attorney General Jeff Sessions recently announced that the Trump administration would terminate a program that grants two-year renewable work and study permits to immigrants who were brought to the country as children without papers.

In the days following the policy shift surrounding Deferred Action for Childhood Arrivals, or DACA, protests, walkouts, petitions, “resistbot campaigns” and calls for impeachment have flooded the internet and the streets of the US. Critics accuse the White House of being cruel, as many DACA recipients self-identify as Americans.

DACA was put in place through executive action by President Barack Obama in 2012. A legislative version of the policy, known as the DREAM Act, has repeatedly failed to pass in Congress.

Nearly 800,000 DACA recipients, who are often called “dreamers” in reference to the DREAM Act, now face the possibility of deportation when their permits expire in six months if Congress does not act.

The decision triggered a renewed debate on the very definition of what it means to be an “American,” in this case referring to a citizen of the United States, with organizations like Define American at the forefront, using stories to put a face to the numbers.

Founded by journalist Jose Antonio Vargas, who is himself undocumented, Define American’s mission is to use the power of story to “transcend politics and shift the conversation about immigrants, identity, and citizenship in a changing America.”

Define American also invites undocumented people and their allies to create and upload text and video testimonials about the immigrant experience in the US.

Giovanni Amado, 23, arrived in the US in 1998 from Mexico City when he was just 3 years old. In his video testimonial, published a few days before the Trump administration's announcement, Amado talks about his work as a fraud specialist in a bank and says he does not understand how terminating DACA helps anyone:

The term American should not be defined by a document or the lack of one. It is more so the willingness to contribute to the country and help others out whenever possible.

And Denea Joseph, a 23-year-old woman from Belize who came to the US at the age of 7, says DACA allowed her to finish her university studies. She defines American as:

..an individual — immigrant or otherwise — who has lent their skills, knowledge, education, business acumen as well as labor that lends to this nation’s positionality as a hegemonic power.

The campaign features a video in collaboration with poet Yosimar Reyes who narrates his poem “I Love Us” throughout a series of images of everyday undocumented people getting up, going to work, dancing, making breakfast, and being human:

I love us / because we have constantly had to prove our humanity / and constantly done it beautifully / Because to stay human / Under these conditions / you have to have an understanding of / Beauty.

#UndocuJoy has seen declarations of solidarity from US citizens and immigrants to the US. Self-identified undocumented writer Ciriac Alvarez tweeted:

Maybe I can't control the cruelty in this world, but I can control what I spread. #UndocuJoy means spreading kindness & understanding

The struggle for permanent sanctuary

His choice of wording recalled Define American's campaign #WordsMatter, launched in 2015, which urges journalists to stop using the word “illegal” to refer to people:

Phrases such as “illegal immigrant” and “illegal alien”  replace complex legal circumstances with an assumption of guilt. They effectively criminalize the personhood of migrants, instead of describing the legality of their actions.

“Being in the US without proper documents is a civil offense, not a criminal one,” the campaign continues.

Given Trump's past disparaging comments about people of Mexican origin, as well as a series of controversial executive orders, pardons, and proclamations that involve minority communities, the move to end DACA and the language used to justify the decision have reinforced accusations that Trump is purposefully stirring mistrust and hatred in society.

Even before Trump's rise to the presidency, the federal government's deportation priorities led certain areas of the country to limit their cooperation with US Immigration and Customs Enforcement (ICE). Currently, four states (California, Colorado, Connecticut and New Mexico), as well as 37 cities and counties, have declared themselves as so-called sanctuary cities.

Following the DACA decision, Chicago Mayor Rahm Emmanuel doubled down on his city's commitment to offering sanctuary, going so far as to declare Chicago a “Trump-Free Zone.”

But sanctuary cities aren't a permanent solution for DACA recipients. Their fate now rests with Congress. Perhaps hearing the personal stories published by initiatives like Define American will remind lawmakers that there are real people behind the statistics and that being American is more than just a piece of paper.