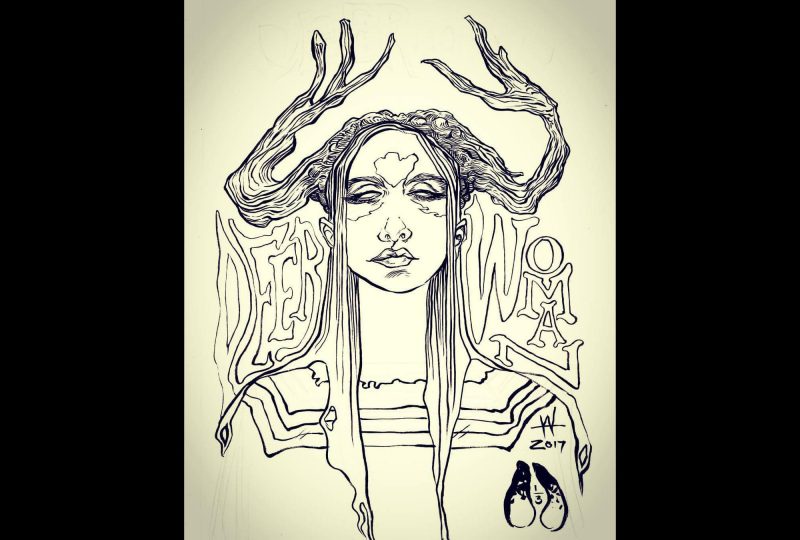 Native women across North America are disproportionately vulnerable to violence. According to the US-based Indian Law Resource Center, “One in three Native women will be raped in their lifetime, and three in five will be physically assaulted. Native women are more than twice as likely to be stalked than other women and, even worse, Native women are being murdered at a rate ten times the national average.”

The statistics are stark, as is the silence that too often surrounds issues affecting Native women. In response, some Native women artists and writers are working to put faces to these numbers. One such example is the upcoming “Deer Woman: An Anthology,” a collection of illustrated stories which deal with violence and pay homage to the strength and resilience of Native women.

Deer Woman is a figure who appears in numerous Native traditions across North America. Although her story takes on different shapes and forms, in many versions Deer Woman “is a powerful, spirit-being meant to remind us (People of creation) to remember our responsibilities, to tend the fire, and to be aware of the powerful forces that exist beyond the homeplace.”

The original idea behind the anthology was born out of the success of artist and writer Elizabeth LaPensée’s comic, “Deer Woman: A Vignette,” published by Native Realities Press in 2015. It features a female survivor of sexual assault transforming into a superhero-like Deer Woman and taking on would-be attackers. Although a comic, the images it contains can be quite disturbing as they expose a dark reality that affects women in Native communities. The comic also includes self-defense techniques from Arming Sisters Reawakening Warriors, an organization that promotes self-empowerment and defense as tools for healing.

According to Native Realities Press founder Lee Francis, the free digital copy of LaPensée's comic, available on their website, is the highest downloaded book on the site.

To create the anthology,  Elizabeth LaPensée joined forces with artist Weshoyot Alvitre, and the two called on artists and writers to share stories inspired by Deer Woman. Their efforts were supported by a successful Kickstarter campaign which raised more than $18,000.

‘She is working as a muse to allow women to talk about these issues.’

Co-editor Weshoyot Alvitre spoke with Global Voices about “Deer Woman: An Anthology,” activism in the digital age and the importance of Deer Woman for women everywhere:

Weshoyot Alvitre (WA): The American Indian movement was so censored back in the day because they didn’t have access to video cameras. They didn't have access to free press. They were very easily controlled by the fact that people, except for international news, just wouldn’t cover the issues and in that they managed to control people being aware of the issues. Nowadays there are ways of working around [this control] because there is almost instant feed. If you can get a small amount out there and spark people’s attention, then people will want to look further into an issue.

GV: Who is Deer Woman?

WA: The story varies from tribe to tribe. I think this book is really interesting in that, in some tribal affiliations, she is looked at as sort of a temptress. If men are doing something wrong in their life, she extinguishes their life force and brings them back to the truth and the good ways. And in other traditions she is a reminder that if you don’t follow the ways, you will be lost. In Native mythology, the natural world and the spiritual world are intertwined. There is almost an empowering aspect to her. She is the figure that has sole control over whatever it is that she is doing and over other people's lives, as well.

GV: How does the figure of Deer Woman connect to the modern day?

WA: There is a lot of hurt and a lot of broken feminine ideals in Native culture, especially currently. And I am hoping with what I’ve done with the book, and what I have seen in the other stories in the book, is to take that broken lost figure, who is almost mythological, and have her deal with modern issues. So it touches real issues and touches real Native women.

GV: What does “Deer Woman: An Anthology” hope to accomplish?

WA: I think through the stories it brings awareness. It can bring awareness and make people look into it further. More importantly, it is giving voices to these indigenous women and not placing any judgement on the story they want to tell through this figure of Deer Woman. She is working as a muse to allow women to talk about these issues. I think deer woman teaches us self-strength […] I think she represents a raw essence of what it means to be female.