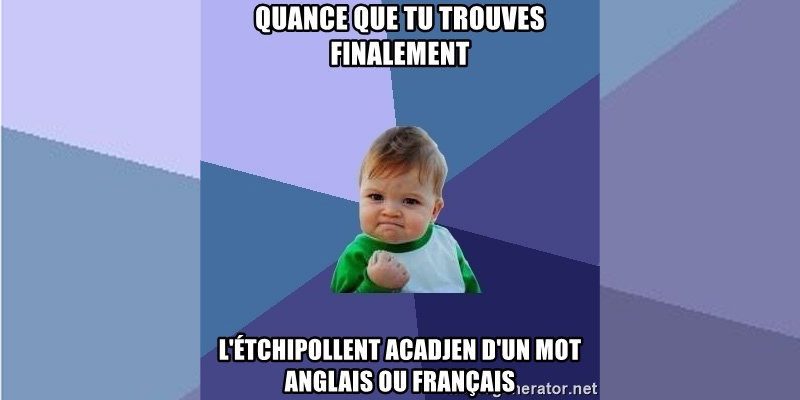 Meme created by the Twitter user @LangueAcadienne in the Acadian French language. Translation: “When you finally find the Acadian equivalent of an English or French word.”

In 2018, Acadian French is one of the languages taking part in the Mother Language Meme Challenge, with memes created by our partner @LangueAcadienne, an Acadian French advocate based in New Brunswick, Canada.

As its names suggests, Acadian French derives from French through the colonization of the north-eastern coast of the American continent by French settlers in the 17th and 18th centuries. Acadia was the name of one of France former colonies in North America, along with Canada and Lousiana (although they had very different borders than the ones we know today). In modern terms, Acadia would most closely correspond to the Canadian provinces of Nova Scotia, New Brunswick and Prince Edward Island. There also exists an Acadian diaspora, mostly due to the Acadian Expulsion of 1755-1763 and more modern economic migrations.

In an interview with Rising Voices, the primary user, who prefers to remain unnamed, behind the @LangueAcadienne account shares a little more about his language and his participation in the #MemeML Challenge.

Rising Voices: What is the current state of your language both offline and on the internet?

To my knowledge, in its written form, there have only been a few literary authors throughout the years who have produced works in varying degrees of Acadian, one of the most well-known being Antonine Maillet. This may be explained by the fact that Acadia was a former French colony and thus Standard French was considered the proper language in formal communications and settings, while Acadian was considered an unrefined language, especially by outsiders.

In its spoken form, a lot of Acadian words, pronunciations and grammar have lost quite a bit of ground or have completely disappeared in the past century, due to lifestyle, social, cultural and economic changes, stigmatization and the growing presence of mass media. Due to these pressures and the fact that Acadians were scattered across English-majority provinces, the language and the people have been torn between Standard French and English, which has resulted in English assimilation for some and different varieties of Chiac for others.

Chiac is a creole-like language of relatively recent development that consists of a mix of old Acadian, English and modern French. It has been gradually taking the place Acadian once held in society, as younger generations leave Acadian aside. It is used informally to various degrees in different areas and can sometimes be seen used on Facebook, along with French and (mostly) English. There is a bit of literature and music produced in this language, as well as a few humour columns and a televised cartoon, but it remains quite marginalized, though I believe it to be in still better standing than Acadian. Though I understand the origins of Chiac and its place in society, it is my personal preference to advocate for the “original” Acadian, in all its varieties, as a unique and unifying language and identity for our scattered people.

This decline of Acadian, its lack of a presence online, on television and in society in general and the threats it is facing from other languages are all factors that motivated me to create Langue Acadienne.

Having looked into various regional minority languages and having lived in an area abroad where the regional minority language was celebrated (I lived in Galicia, where despite the constant presence and threat from Spanish, the people there were proud of their Galician language and had standardized it and made it official at the state/provincial level), I love the idea of promoting linguistic diversity in the world. Using modern Internet culture seems like a perfect way of raising awareness and promoting linguistic diversity both online and the in the real world and it fit perfectly with Langue Acadienne’s objectives and its content.

I would like to encourage the whole Acadian community to create memes and any other type of content in Acadian. We are in desperate need for more. I’m sure the same can be said of the Mi’kmaq and Maliseet languages, so I encourage youth from those two communities to join the Meme Challenge as well. Internationally, I have seen content from l’Office du Jèrriais and l’Académie du Gallo, so I would like to challenge people who speak other regional languages in France to participate as well. It is always fascinating to see the similarities and differences between our sister languages.