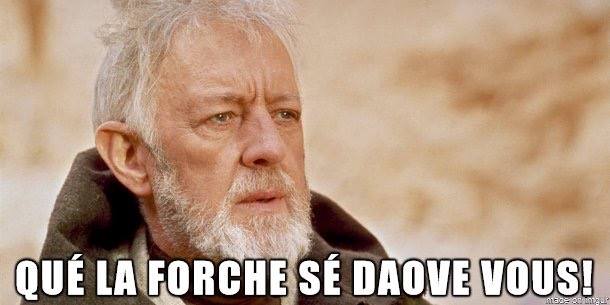 Translation: “May the Force be with you”. Meme by @languagegg

Guernsey is an island in the English Channel. While geographically closer to Normandy and Brittany in France, it is a British Crown dependency (but does not belong to the United Kingdom). The long and tumultuous history between France and England since the Middle Ages shaped the Guernésiais language, a variant of Normand French with strong influences of Old Norse and English.

Online, there is an app which was launched last year and is growing organically. To access it, first download the Digital Greenhouse Guernsey App and then go to the WARRO! Section. Offline, we organize get togethers for people wishing to learn the language – and also lessons.  I predict that there are currently under 100 people who would consider themselves ‘learners’ of the language worldwide.

We’re always interested in ways to raise the profile of the language – and which are effectively free of charge. It can be isolating working on minority languages but these kind of initiatives make you realize that you’re not alone, but part of a big friendly family of tiny languages around the world.

Umm…   Barack Obama?? That would be pretty cool.