A pathway towards community access: From telecentres to community networks 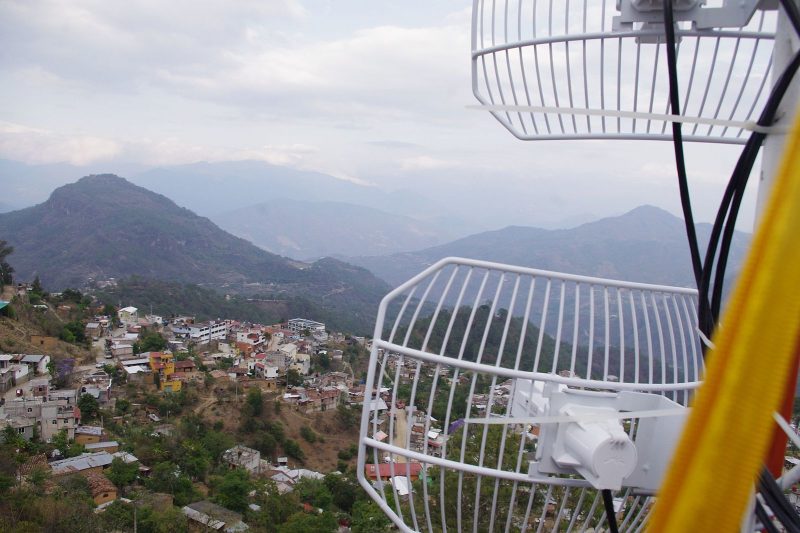 Rhizomatica's antenna in Alotepec, Oaxaca, Mexico. Photo by Onion from Wikimedia Commons and used under a CC BY 3.0 license.

The following is the 2nd post of a three-part series that was written by Florencia Roveri of Nodo TAU and originally published on APC News and is republished here as part of a partnership between the Association for Progressive Communications and Rising Voices. Read the first post about telecentres and the second post about community networks.

In Mexico, the work of Rhizomatica helped connect up 17 towns in Oaxaca in the southwest of the country. This they did by setting up a cellular telephone system and incorporating in the project indigenous communities and other people dedicated to telecommunications using the Rhizomatica open system, who were awarded the frequency concession. This was a milestone in community telephony and a major achievement for the organisation.

In 2002, Erick Huerta, a member of Rhizomatica, was in charge of the Office of Access to Information and Communication Technologies of the National Commission for the Development of Indigenous Peoples. During those years, the Mexican government installed telecentres for use by indigenous peoples. “We saw that the problem with telecentres was methodological, the way in which technology was introduced to communities. We published a manual that was called ‘Use of Information and Communication Technologies (ICTs) for local development: Community appropriation of telecentres’. This was a very successful project based on a pilot scheme that was not successful at first. However, with the application of the new methodology it became sustainable. The situation of telecentres as a policy has been moving towards internet access policies implemented in public squares (plazas), schools and cybercafés. At times this proved to be very important and there are many accounts of good work being done,” said Huerta.

Today, Rhizomatica is dedicated to community networks. “The networks have been set up with the objective of satisfying the needs of communities, so that they are able to provide themselves with a service or lower costs. We have urban or rural networks that take a Wi-Fi connection and distribute it: this is the most basic model, while there are others, like the one we use, which incorporates mobile phones. The challenges are many: technical training in access to adequate and easy technology, as implemented by LibreMesh, and the challenge for networks to be able to be considered as operators, because they do not have the licences to offer such services.”

This was a stumbling block that Rhizomatica was able to overcome, which shows that in the current ecosystem dominated by market reasoning, advocacy work in regulatory and political frameworks is as important as community work, methodological definitions and technical training.

When comparing community networks with telecentres, Huerta finds more differences than similarities. “In the case of telecentres, I think one of the challenges was that everything focused on training in how to use them. The current networks go beyond that stage because we are talking about capabilities for the creation of infrastructure. The telecentre basically provided the equipment and the internet connection. At that time, both were associated. Today, equipment has become independent and most people possess it. You do not need a computer, just a phone and with that you can do a lot of things and connect to the network. I think that is the main difference. The community network primarily provides the internet service, although it can also develop content and reach more sophisticated levels.”

Looking to the future, the inclusion of communities continues. “Thinking about the future, I believe that if we can articulate these networks in an appropriate way, then we can have a very large network controlled by the people,” Huerta concludes.

In different technological contexts, communities have found and continue to identify strategies for access to information and communication technologies through which they can meet their needs, and they do so together with other actors determined to commit themselves to the path of inclusion and social development. Social, non-governmental and international organisations, governments and even the private sector have created or joined forces with different initiatives.

In these contexts, the experiences of telecentres and community networks combine two points of focus that prove decisive when analysed: their ways of approaching the community and their methods to resolve technological issues. Although telecentres and community networks are anchored by definition in their communities, this must be reviewed in each experience, taking into account the self-determination of the communities in each case.

And in terms of technology, although both experiences show differences and similarities, when they are encouraged to promote the development of communities, they can face similar challenges and contradictions. The present tension between models that are respectful of and defensive of rights and which approach technology as a resource of public interest or welfare, and other models that promote commercial reasoning, private sector appropriation and centralised control, locate this analysis in the area of governance. In this respect, such tensions are resolved in decisions and regulations that are either in favour of communities and their rights, or support concentrated commercial sectors. Thus the pathway towards social appropriation of technologies continues to be constructed.