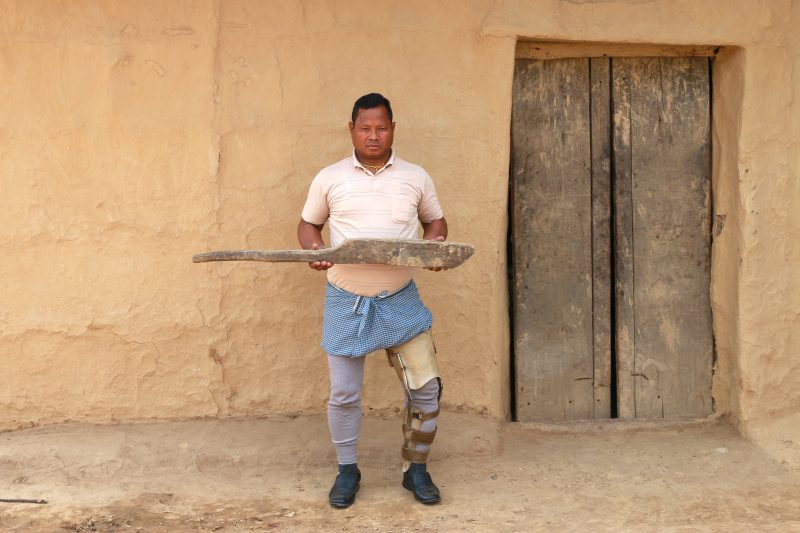 Ram Ratan Chaudhary of Banke had kept a piece of wood to make a plow. On 14 February 2001, the Maoists beat him with this piece of wood and made him disabled. Photo by Bikkil Sthapit. Used with permission.

The Nepalese Civil War [1], known popularly as the Maoist conflict, was a bloody 10-year armed conflict between the Communist Party of Nepal (Maoist) [2] and the government of Nepal [3] which saw forced disappearances, rape, torture, death, and the displacement of thousands of Nepalese citizens.

To ensure that the victims of this violence won't be forgotten, an online multimedia project called Memory, Truth & Justice [4] is documenting, archiving and sharing personal stories of survivors and families of the victims who were lost to the conflict.

The mission of the Memory, Truth, and Justice project is “to preserve and dignify their memories by recording testimonies from survivors and families of the victims, and by sharing them with the community at large with a purpose of education and remembrance.”

To do that, the project is sharing video, audio and photo testimonials from around the country — paying homage to the memory of survivors, victims, and the affected families.

For Hemraj Tharu and many others from Bardiya district [5] in midwestern Nepal, the Maoist insurgency in Nepal was a lose/lose situation of the worst kind. Tharu was interrogated and tortured by the Nepalese Army on the suspicion of aiding the Maoists, but he was also mercilessly beaten by the Maoists who left him to die. Fortunately, he survived the ordeal — but he lost his hand.

Palsang, one of the hundreds of torture victims, is still scared of salt, electric iron, electric wire – the items used to torture her.

Another testimonial tells the story of Krishna Ghising who wanted to go to South Korea to earn money for a better future. After visiting his village in Dolakha district [6] to get a passport made, he boarded a bus bound for the capital Kathmandu. [7] During the ride, an explosion ripped through the bus, injuring his spinal cord and leaving him in a wheelchair. 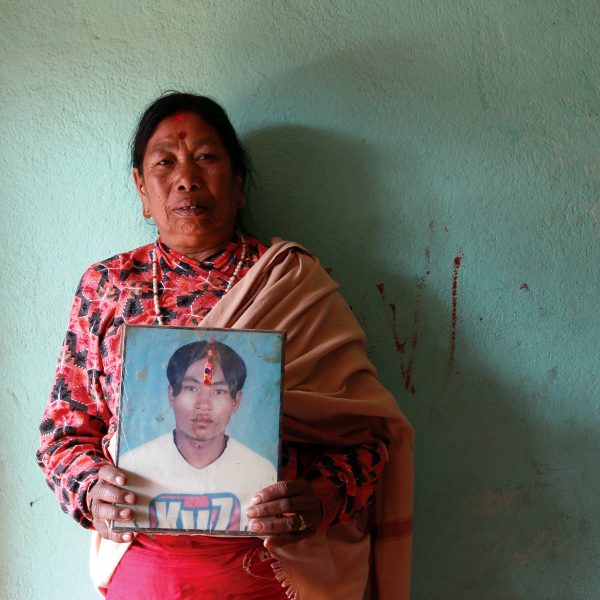 Ratna Kumari Mali has safely kept the Bible her son used to recite. Photo by Bikkil Sthapit. Used with permission.

Other testimonials tell the stories of those who were left behind, like Ratna Kumar Mali from Lalitpur district [8] in Kathmandu Valley. She has safely kept the Bible her son Baburaja used to recite with the hope that one day he will return to claim it.

Ramkali Devi Tharu has kept the sickle that her husband Guru Prasad Kathariya used to carry with him to the rice field. Sharmila Chaudhary from Dang district still puts some food in a steel plate and bowl every day before eating. She still hopes her son Jagi Ram Chaudhary, disappeared 16 years ago, will come and join her.

Seeing packets of biscuits and noodles, Sapana Suwarnakar from Gorkha district [9] in the Western region thinks there might be hidden letters from her brother who used to send letters hidden in the packets from the Central Jail in Sundhara area of Kathmandu. 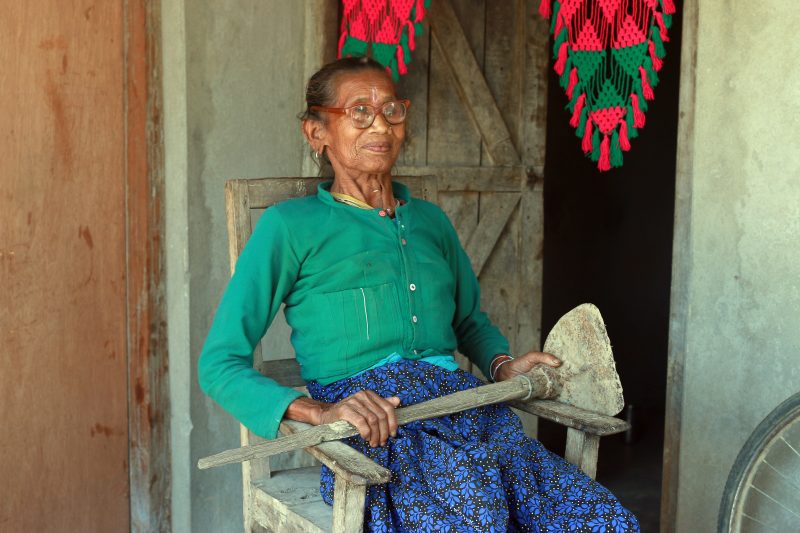 Surjan Tharu of Bardiya has safely kept a faruwa, an iron hoe, she and her son used while working in the forest. When he was disappeared, he had just become the chairperson of the nearby community forest. Photo by Bikkil Sthapit. Used with permission.

These are only some of the many stories related to the mass killings, enforced disappearances, sexual violence, and torture during the 10-year armed conflict which killed 17,886, disappeared 1530, and disfigured and disabled 8,191 people [4]. 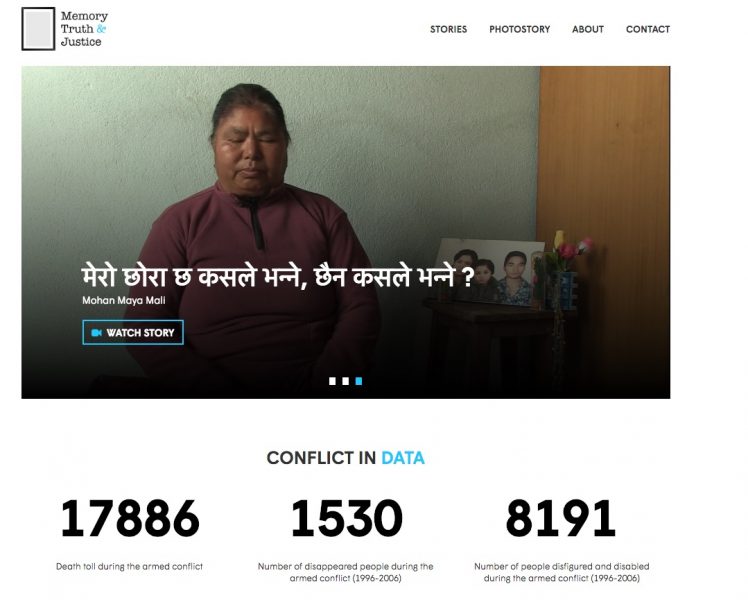 In early October 2018, the project exhibited [10] audio-visual stories and memorabilia of the survivors and families of victims in Kathmandu:

Over a thousand students from mostly community schools visited the exhibition. They left comments, all of them appalled, felt 'sad for the victims and families who their lives and happy for those who survived the war' #Nepal [11] pic.twitter.com/vt27de55Bi [12]

A room of a young woman who was raped and killed by armed forces brought tears to many visitors’ eyes:

The room of the one who was taken. I couldn't stop my tears when I enteted this room. It was recreated by the artist to show how the armed forces forcefully took young women from their houses, raped them and then killed them. As you enter the room, you would hear the knock on the door and a shrill voice of the woman, "ko ho, ko ho?" (Who's there?) Then you'd hear her cries. You'd shiver as you see the scene, the book rack turned upside down, the trunk thoroughly scoured by the forces, the mattress and the bedsheet pulled down from the bed, a lamp flickering on a small cutout on the wall, a transistor (read radio) belching out ominous sound, belongings of the owner scattered here and there in the room, and a dreadful red light blinking from the closed window! A room of horror, it helps you visualize how the rural people survived the atrocities of the armed forces and Maoists during the People's War (1996 – 2006). If you've time, make sure to visit the exhibit 'Memory, Truth & Justice' at Nepal Art Council. Using audio, video, art and photography, the project has recorded the horrendous memories of survivors and families of victims. Wait for more stories of torture, pain, agony and anguish. ———————————— #memorytruth&justice #peopleswar #exhibition #stories #abduction #rape #killings #armedforcesatrocities #maoistatrocities #horror #warmemories #artproject #EverydayNepal #nepalartcouncil #instablogger #picoftheday #instapic #instalike #instaart #instaartist #history #chronicle #survivorstories #warstories #instastories #instahistory [14]

The audio portion of the exhibit shared stories of pain which left people speechless: Stories of Ram Narayan Tharu of Banke whose wife was raped to save his life; Pushpa Shrestha of Dhading District [16] who was gang-raped by army soldiers when she was a small girl; Khushiram Chaudhary of Dang in Western Nepal who was tortured by the army; Mahesh Chaudhary of Dang who was arrested by the army for offering food to Maoists; Ruku Chaulagain of Kavrepalanchok district who protested sexual violence attempts during imprisonment and many more.

In an email interview with Bikkil Sthapit [17], the brain behind the project, he said:

The idea about exhibiting the stories of People's War survivors [was conceptualized] with a simple thought of recording individual testimonials to create a rich personal history of the armed conflict, and to share these accounts using multimedia for the historical record, education, and advocacy. An accurate account must be created and the real cost of this period of conflict for victims, survivors, and the society must not be forgotten.

Memory, Truth, and Justice, simply took off with an urge to start documenting these stories as the people fighting in search of truth and justice were gradually dying and fading away.

He shared one of the interesting anecdotes during his fieldwork.

I remember interviewing Moti Maya Paudel, mother of Purna Paudel, which ended with half an hour of crying after she said she saw her son's face on me. Coming back from the field, I saw myself on the mirror and figured that I do look somewhat close to her son with similar beard and face-cut.

Most of the time we would encounter heart-breaking moments and realizations like these. Among around 120 families, there are rarely any houses where we didn't cry. It’s an emotionally challenging field work to carry.

Unfortunately, amputee Hemraj, one of the storytellers of the project, passed away two days prior to the start of the exhibition.

Hemraj Tharu, one of the storytellers of M,T& J, a survivor of torture and a man made disabled by the beatings of the Maoists in the People's War passed away 2 nights ago. Rest in Peace Hemraj. We hope you are in a better place. #mtjnepal [18] #memorymatters [19] pic.twitter.com/GyKq8xVLdd [20]