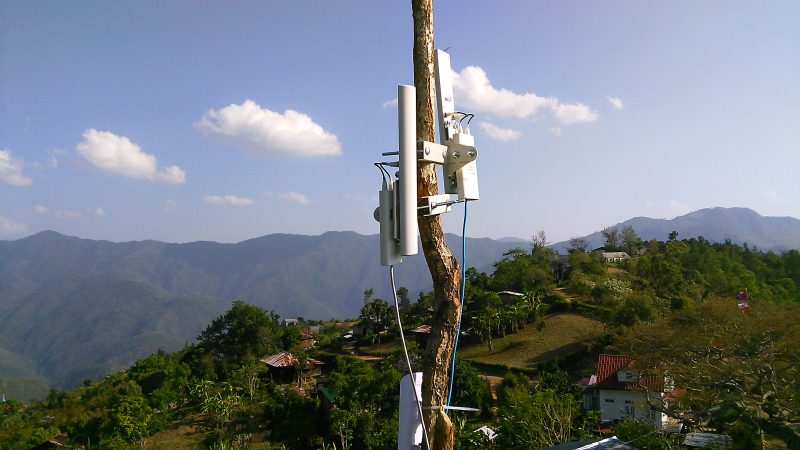 This country report was written by Michael Suantak for the organization Alternative Solutions for Rural Communities (ASORCOM). Please visit the GISWatch website for the full report which is also available under a CC BY 4.0 license.

Alternative Solutions for Rural Communities (ASORCOM), a community wireless network, was built in the Siyin Valley for 20 villages with around 8,500 people living there. The Siyin Valley is a mountainous region in Chin state in the northwest of Myanmar, with peaks reaching up to over 2,100 metres. The network operated between April 2013 and 2017, before the arrival of mobile services in the area forced the project to evolve to meet new community needs.

The network was set up by the Siyin-Chin Youth Network Organisation (SCYNO) and the Siyin Project. These two organisations were eager to help and develop the communities where many of their members had grown up, and whose needs they were familiar with. They wanted to change the community and build a better, more sustainable society.

The communities involved in the community network were made up of vegetable farmers mostly dependent on shifting cultivation. Their seasonal produce was sold in the nearest town called Kale, almost 100 kilometres miles away.

When the project first started in 2013, they used the cheapest wireless devices available in town: a TP-Link brand long-range wireless access point. One of the team members, Thomas Khaipi, who studied and lived in Germany, bought two Village Telco devices and tested them as a communication solution for communities in the Siyin Valley. However, they were not useful as a long-range wireless network solution because they only worked well when they were set up close to each other. The project also faced other challenges: for example, the Myanmar government (a military dictatorship) had taken away some devices and warned not to set up private networks without their permission, which had to be passed by the union ministry from Naypyidaw. At that time internet censorship was taking place and building private networks was not encouraged. 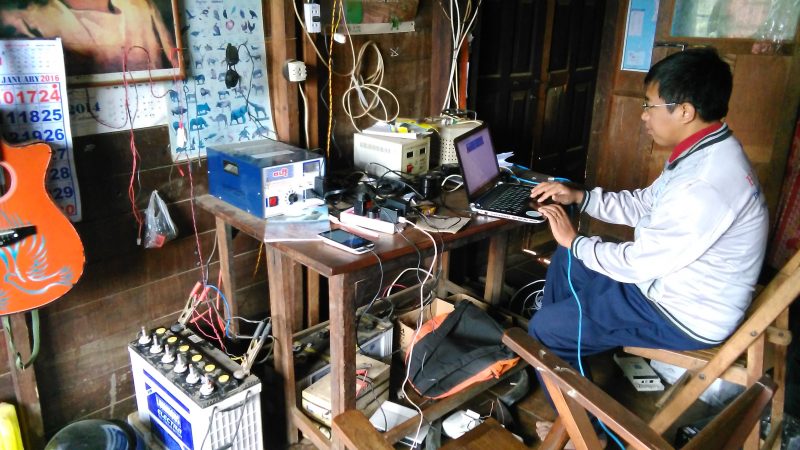 Later on, the team got the opportunity to buy and install Ubiquiti devices. They changed the network topology and redesigned the network, using 5 GHz for the backhaul connection and for the main connection between the villages, while 2.4 GHz devices were used for the connection inside the villages. The old TP-Link devices were also used for wireless access point connectivity inside the buildings. They were gradually replaced with Ubiquiti devices which supported mesh firmware. For some areas, such as school compounds, Commotion mesh firmware with Ubiquiti devices was used.

The community members supported the initial pilot project from the beginning. Many times they had discussed and shared alternative ways to solve their communication difficulties, their poverty, lack of skills and knowledge, and educational challenges. Many joined the team and shared their physical energy to cut down tall trees in the jungle and bring them to the villages to use as masts for the Wi-Fi antenna. Some shared their houses for accommodation while we set up the networks, and prepared food for a series of community meetings in the different villages. Some shops donated tea, coffee, cold drinks and cake for lunches when there were activities. Other shops discounted the cost of petrol and diesel used for the project.

As part of the project, we sold some used computers and mobile phones with credit and instalment plans to the communities. We organised some basic computer and mobile training workshops on how to use the internet and social media. When they had their own devices they could play and learn much more effectively. They built their confidence in using information and communications technology (ICT) devices and software tools. They could communicate with their family members and their relatives who live in other places in Myanmar and abroad. 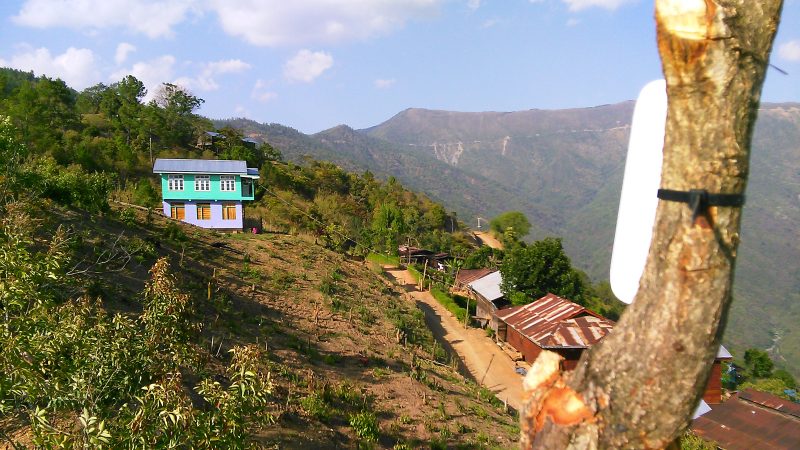 As their main income related to cultivation, they learned techniques and methods for agriculture and food production by doing online research. They also learned how to check the weather forecast. They could communicate with buyers from cities and negotiate the vegetable price before sending their produce to the town markets. School teachers shared what they learned about the internet with their students. Students also had the opportunity to use the internet, and to read, see and learn many new things.

As the women’s population was bigger than the men’s in the Siyin Valley, most of the hard physical work was done by the men, but the tasks of organising and communicating with other communities in the other villages were mostly done by women. Financial and administrative work, such as bookkeeping and playing the role of treasurer and secretary for meetings and discussions, was in the hands of women. As the shop owners were women, donation and discounting decisions were made by them as well.

Given that the project planned to collect a small amount of money as a contribution from users to pay for the shared internet bill and other expenditures, women in the community led the collection process and the management of the income every month. Some young women and men even met partners online, and ended up getting married. Some women learned textile design and techniques for making clothes, and made them for themselves and sometimes sold them to other community members.

As the project had its own local server, it could download and host Khan Academy and World Possible content for educational purposes. Entertainment videos were also hosted on our local server, so that network users did not need to buy DVDs and use the internet for entertainment anymore. Instead, they could enjoy their selected entertainment “channel” on their smartphone or laptop from their home. 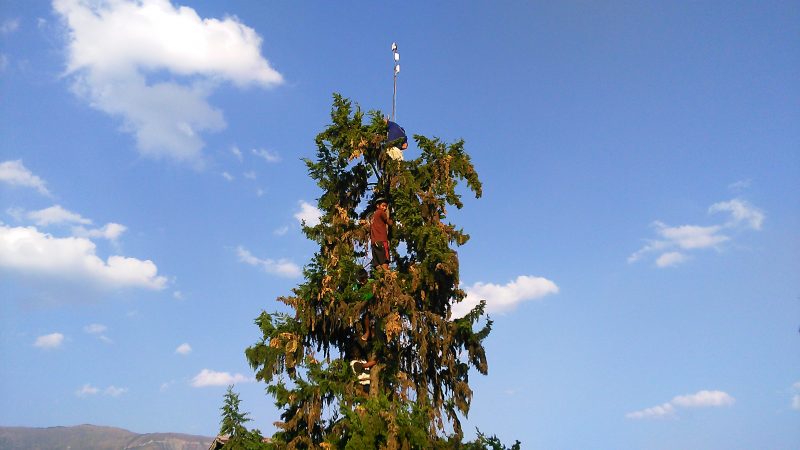 One unique story from our project involves a teacher who was a young woman and who worked at a high school in Thuklai village in the Siyin Valley. She had come from a city called Monyua, which is more than 800 kilometers away. This was the first time she had travelled to Chin state, and she felt alone and scared. She said that she used to cry every day in the beginning, but because of the ASORCOM wireless internet she could now connect with her family and friends who were far away. She also said that she was now very happy in Thuklai village. Her friends, who are also teachers in the other villages in other parts of Chin state, wanted to transfer to Thuklai because of the easy access to the internet and the support from the local community.

Freedom is not the same as getting things for free. Sometimes people do not value services that they do not have to pay for. To empower people to have responsive behaviour when using the community networks and maintaining them in a sustainable way, we asked for contributions, not only of money, but also their time, whether through physical labour or other forms of volunteer engagement.

Sometimes users would fight amongst themselves. Some users downloaded videos and games that affected connectivity for everyone. Sometimes people wanted to charge their neighbours for connecting to their router. We have had to offer counselling to resolve these disputes. We have also had to install software to monitor and control the system to limit heavy downloads and access to “adult” content, and to restrict some users during school hours.

Some reported that community users only spent time using social media, which they felt was not improving their lives in significant ways. In order to change this and encourage users to read more widely, we set up a system where users first had to complete a quiz with general knowledge questions before being granted a week's internet access. If they did not know the answers they would have to go do some research in the local library folder on the network.

There was no national electrical grid in the project area, so the project had to depend on hydropower and solar power. During the rainy seasons, hydropower stations were washed away by flash floods, and solar power was made ineffective by heavy cloud cover. The network did have a backup generator, but the diesel needed to run it led to extra costs for the communities. This meant that the use of the network was limited in the rainy seasons.

The ASORCOM community Wi-Fi network was active until the end of 2017. In mid-2017 the area received mobile telephone coverage by the MPT GSM network. Later Ooredoo 3G and Telenor 3G also offered their services to the area. Because of this, the network needed to develop new plans, which included upgrading the network so that it could be used for local community media including audio podcasts, video streaming and IPTV. A data server was set up to assist with local administration.

At present, the team is working on supporting community radio stations in Myanmar. It is setting up a community FM radio station in the area and has been engaged in conducting surveys, meeting with communities, offering radio journalism training and workshops, and drafting constitutions and bylaws for community radio stations which will contribute towards reforming the national broadcasting law. The team has also been forming a development committee for the communities in the valley and building a music recording studio.

For more information regarding action steps for Myanmar, please visit the full report on the GISWatch website.