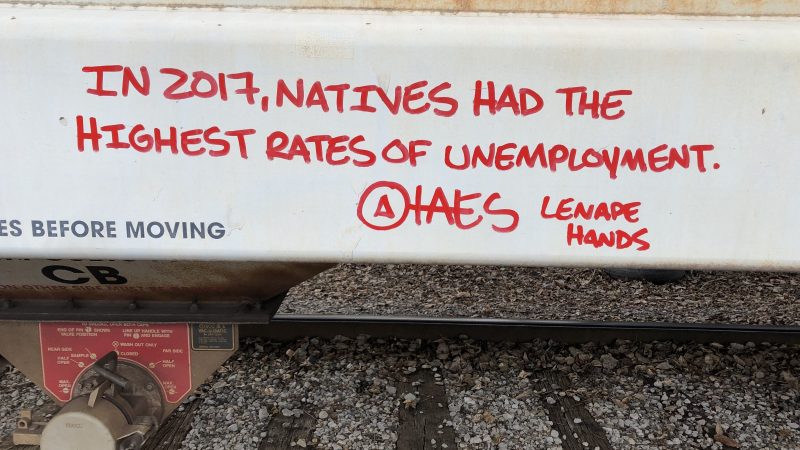 Photo provided by the artist Ótaés and used with permission.

Indigenous lives often go unnoticed by the mainstream United States. Ótaés, an artist from the Ramapough Lenape Nation, is determined to change that.

Using a combination of oil markers and wheat pastings, their work can be seen across the country and “centers around discussing injustices the Indigenous community faces and exposing erased or manipulated history in the Midwest and Appalachian region,” they told Rising Voices.

The Ramapough Lenape Nation spans lands in what's known today as New York and New Jersey. The artist gathers their research from a variety of sources ranging from archaeological records to oral history told by elders.

Through Instagram (@ndn.o), Ótaés has published more than 110 pieces of artwork. For example, this one calls attention to the fact that one-third of Native American children live in poverty:

Some of their messages focus on the recent history of Ramapough Lenape Nation's lawsuit against the Ford Motor Company. The Rampapough Lenape Nation accused the company of dumping hazardous waste down abandoned mines in New Jersey affecting their lands, causing serious health issues for residents:

Ótaés often throws harrowing statistics about Native American life into their work to raise awareness of the injustices faced by their people.

Invading and murdering nations then wearing a disrespectful parody of the culture you tried to erase is unacceptable. We will not allow you to profit off our indigenous identity.

Only 47 of the nation’s 570+ federally recognized tribes are part of DOJ’s crime statistic/occurrence exchange. Virtually no information is being collected by the US government on missing people, murders, abuse. Why? Because the tribes must PAY (!!!) to be involved and meet other very rigorous guidelines that Nations struggling to stretch budgets can not afford. Again, most crime committed against natives is by non-natives (70-90%) and the US government feels no need to ensure they know how much crime is being caused by their own citizens… #mmiw