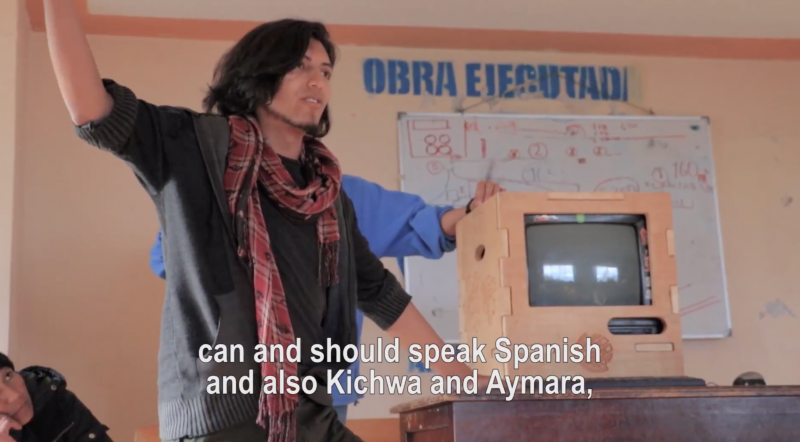 This post was written by Stéphane Coillet-Matillon. It originally appeared on the Wikimedia Blog and is republished under a CC BY-SA 3.0 license.

There are villages in the Ecuadorian Andes that are so small you cannot find them on a map. Cajas Juridica is one such place, located just 13km north of the equator. But two engineering students, Joshua Salazar and Jorge Vega, and the staff of Yachay Tech University have figured out a way to give discarded CRT TV screens a second life, using Kiwix—an offline Wikipedia reader—to bring Wikipedia to these communities. Josh Salazar told us more about their Offline-Pedia project.

Wikimedia Foundation (WM): Tell me about what started your interest and involvement with offline Wikipedia: are you a Wikipedian?

Joshua Salazar (JS): Since I was a kid I always loved encyclopedias, especially the digital ones because of the multimedia content, I was a really big fan of Encarta. I remember that in the school I attended, there was a computer with Encarta which they used to rent. I really loved to surf through all of its topics and stuff, and in general every kid loved it too, and every kid in that school did as well. My interest really started there, because one of the main problems was that they rented the computers, and also there was no internet connection. A cheap, available-for-anyone computer including the whole Wikipedia would have being perfect in such places! That’s why I became really motivated to make Wikipedia available for rural communities such as the one where I grew up.

I just have edited some small sections of a couple of articles, already… but I’m looking forward to have more time to write more when finishing my bachelor degree.

WM: What is Offline-Pedia? How does it work?

JS: Offline-Pedia started as a project focused on setting up computers with Wikimedia content, using low cost and recycled materials, such as wood for the case and old CRT TVs as screens, for rural communities.

The usage of free hardware and free software (a Raspberry Pi, Raspbian: a Debian based OS, Kiwix) turns the installation of one device into something very cheap to make. By getting an old TV, everything can cost around USD 100 per device. Thus, one of the main goals is to upcycle old CRT TVs and other kind of compatible screens.

Why CRT TVs? Well, because in Ecuador, at the of this year (2018) the main TV broadcast signal mode will switch from analog to digital signal: then a lot of TVs will become electronic waste. With the project, we aim to solve two problems: the difficulty of accessing the internet in rural communities, and handling the future electronic waste by reusing the obsolete TVs.

WM: How did you find out about Kiwix?

JS: I knew of its existence since I was in the last year of high school, but actually don’t remember exactly where I read about it. I’ve been always subscribed to Free Software and Linux newsletters and pages, maybe in one of those.

WM: What’s the hardest part of the technology to deal with (for you on the one side, and for the end users on the other)?

JS: Compiling the program source code from scratch into the Raspberry Pi. You know, there are always more dependencies that rely on other dependencies to work, or forgetting the folder paths of the previously installed packages, and so on… but it was fun. After making it work for the first time, just recently actually, we found out that precompiled versions of Kiwix (but just the server) existed. I became a little upset because I even missed some classes for compiling it on time to fulfill the promise we made to the community. Anyways, later the Kiwix guys also shared with me a beta automatic installer and downloader for preparing microSD disk images for the Raspberry Pi. That will save us a lot of time for the next Offline-Pedias we will be preparing!

The technical difficulties with the users were more related to the ‘techno phobia’ of the elderly people, but the youth and children really loved it!

WM: What happened when people started using your box? What lessons can you share with other people who might want to do similar projects?

They started to look for literature! ‘Romeo and Juliet’ in the Gutenberg Project Library, and the biography of William Shakespeare in Wikipedia. That was something we would never have imagined!

I encourage people to replicate the project in whatever and wherever place they are, because there always are curious people and helping them access to the biggest reference platform in the world makes you feel very inspiring, very accomplished and happy.

WM: What’s been the biggest surprise? The biggest challenge?

JS: The young people looking for English Literature was very unexpected. That demonstrated to us that we don’t really know what the people of the community want from us. So, a big challenge will be to properly learn from the people. But luckily, a professor on our University ‘Yachay Tech’, Sergio Minniti, who works developing ‘critical technical practice’ prototypes with students decided to help us. He is a sociologist and will help us start a second phase of the project: ethnographic studies for further understanding the actual needs of the people involved with the project.

WM: Offline-Pedia also includes other contents: what are people most interested in, and what would you like to see made available?

JS: Offline-Pedia contains the default tools provided by Raspbian—Scratch, Wolfram Mathematica, and so on—and as much as we could download from the Kiwix zim Packages available (Vikidia, PHet Chemistry and Physics Simulations, the Gutenberg library; all except the TED talks, which were very large.)

People really loved to have offline Wikipedia access, because it has basically articles about whatever they want to know about.

I would like to implement an offline working wiki software to allow people to directly have a wiki experience: to create, edit, and discuss about the content. So later, after we return periodically to check whether everything is running nice and smooth we can take the new created content and upload it to the Wikipedia. That would expand the range of action of Wikipedia to the zones where even internet isn’t yet available.

WM: How do you see these devices impacting the lives of people they are shared with?

JS: I hope people will become more motivated to read and look for answers whenever they have doubts. Since I started to give speeches with Jorge Vega, another member of the Offline-Pedia project, I wanted the people to understand the importance of learning about science and technology, and how those aspects are vital for the economic, academic, and human development of our communities and country. But most importantly, making them aware of the enormous freely available knowledge for every single human on Earth, freely available on Wikipedia. 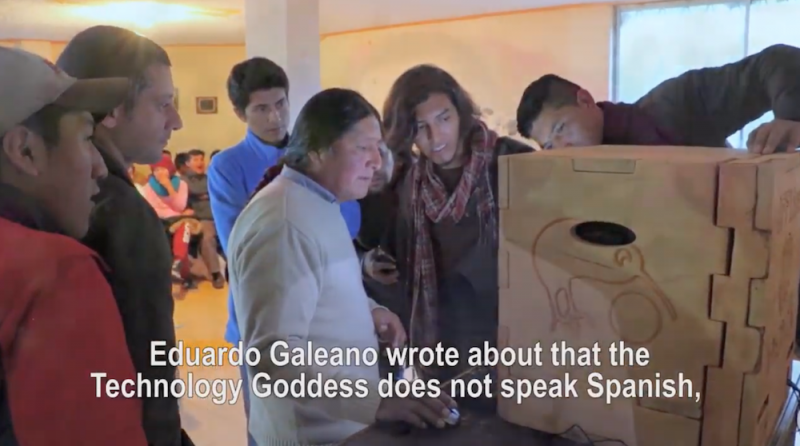 WM: What’s next for your project? If you dreamed big, where should it go?

JS: We want to work together with the Ministry of Education of Ecuador, for replacing the expensive budgets of the projects they have, and also developing some kind of software that could allow people to learn the minimum topics required for completing the Basic Education Program of the Ecuador’s Education Curriculum.

WM: How else can Kiwix or the Wikimedia movement help you?

JS: Spreading the word! We will be preparing some video-blog and tutorials where any tech-enthusiast can download the required packages, download the blueprints for cutting wood on CNC machine for the box, and understand the process of installation, and even sharing their experiences wherever they installed an Offline-Pedia device working with Kiwix and even further content that we may be developing in the meantime.

WM: What resources exist for people who want to know more?

JS: Right now, we just have the video that the cool guys of the Communication Office of our University helped us record while installing the device in the first rural community. Soon we will be finishing a blog with everything related to the project.