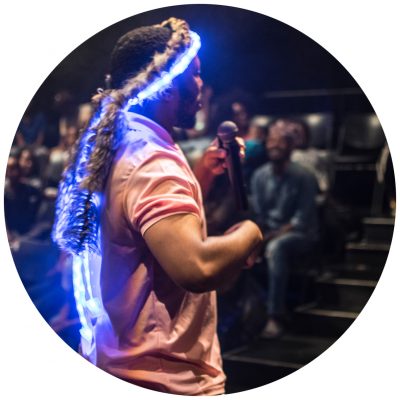 In 2019 as part of a social media campaign to celebrate linguistic diversity online, African language activists and advocates will be taking turns managing the @DigiAfricanLang Twitter account to share their experiences with the revitalization and promotion of African languages. This profile post is about Siya Masuku (@siyamasuku) and what he plans to discuss during his week as host.

Soweto-born Siya Masuku ran a 113% successful online crowdfunding campaign in July and August 2016 to launch his own publishing platform, Siyafunda Online. The alphabet book, Siyafunda: isiZulu (2016), has colourful images of lino printed animals. It is available with English translations in print and digital formats.

A recipient of the David Koloane Arts Writing Award (2017), Siya is a self-published comics writer and illustrator of uNjabulo: emkhathini (2017) and uLanga (2019).

English remains the more commonly used language across the internet. However, platforms which offer services by isiZulu tutors, courses and programs are accessible online. Siyafunda Online is one such platform.

Some of the topics in mind

I hope indigenous languages continue to evolve. They are forced to, regardless, in order to stay alive. It is when we shift our perspective from a preservation-based approach to one which is associated with boldness and curiousness that the language and its people open up to new possibilities.

IsiZulu has nuances other languages cannot interpret. Let us let it take shape naturally in a single story through print, song, performance art, gaming, augmented reality and other mediums of modern communication.