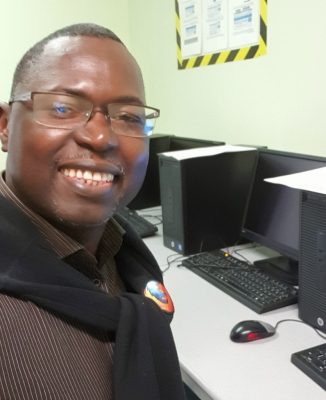 In 2019 as part of a social media campaign to celebrate linguistic diversity online, African language activists and advocates will be taking turns managing the @DigiAfricanLang Twitter account to share their experiences with the revitalization and promotion of African languages. This profile post is about Ibrahima Malal Sarr (@ibrahimasaar) and what he plans to discuss during his week as host.

I am a linguist, web developer and programmer from Senegal. I am also a former Mozilla Rep and a member of ANLOC (African Network for Localization). As a long term Mozillian and Fulah localization team lead and a SUMO and KB l10n contributor, I have created most of Fulah Internet and IT terminology from scratch. I was a part of the incredible team of Reps present at Mobile World Congress (MWC) 2015, reporting the event in social media.

I studied Applied Linguistics, Translation, and Computer Assisted Language Learning at Moray House College in Edinburgh, Scotland. I feel like I am a true “indigenous geek” who is passionate about making technology available in my own language, Fulah (ff).

I have been involved in Fulah language translation and localization, as well as promoting the language on the Internet (www.pulaagu.com and www.blog-pulaagu.com ). In 2009, I led Fulah teams in the 100 African Language Locales initiative.

I also created most of the Fulah terminology for ICT, especially Firefox terminology. I feel that my biggest achievement yet is the localization of Firefox into Fulah, which was released in June 2012. Since that time, Firefox OS has also been localized into Fulah, making it the first African language to have fully localized the new OS.

Fulah (ff) is spoken natively by around 46 million in 20 countries from Senegal to Sudan (native speakers and lingua-franca). Language code is “ff-SN” for Senegal (Name of language in Fulah: Pulaar) I have been contributing to open source for 9 years now and I am the Fulah team lead for Firefox localization and other open source projects. We have translated Facebook recently (launched in 2016).

The status of the language is somehow awkward. Fulah is marginalized in many countries with a strong second most spoken, sometimes even the most spoken, Many states have a hidden agenda to favour one language and are doing everything to stop Fulah from being used in the media and education.

While it has been chosen by the Academy of African languages as a “cross-border vehicular” language, it is nonetheless not a majority language in all those countries, except maybe Guinea where it is still quite marginalized.

In spite of and because of that, we have developed a strong commitment to develop the language by active militancy and motivation. The result is a much more codified language and a lot of work done in the spread of writing and publishing books.

As far as on-line presence is concerned, Fulah has been on the web since 1994 with the very first web site I created as part of the Pulaar Project. At that time I was hosted by Compuserve, one of the ISP's of that period. Later, that project became “pulaagu.com“, which is still active and visited by thousands from 37 countries!

We have translated so many software into Fulah. Among those: Firefox (2012 all platforms), Abiword, VLC media player, VIrtaal (a CAT tool), Pootle (Web-based Translation Server), Facebook (launched in 2016).

Facebook is no doubt the platform that has given Fulah the most decisive boost as far as writing is concerned. There are hundreds of groups where people spend a lot of time discussing in Fulah, and that helped a lot to learn to write the language correctly instead of using French or English!

With the help of keyboards we developed for PC and Android, people find it more convenient to write and discuss on-line using a dedicated keyboard. We still lack a keyboard for ISO as I personally don't own a MAC computer, which is necessary to develop for the Apple platform.

Generally speaking, Internet has helped Fulah achieve thing that would have been difficult otherwise, given the efforts to keep the language back in many countries. Now apart from the website, there are many on-line radios and TV and many dedicated Youtube channels since local TVs usually don't have a single program in Fulah or national TVs having a ridiculous 10 minutes a day/week or even sometimes less!

First of all, I would like to address three target audiences: the international community, the governments that are doing everything to impose only one (other) language, and the Fulah speakers themselves. Accordingly, I will be focusing on achievements of the language, thanks to the Fulah community, also to show that much remains to be done. Then I would like to draw attention on the “linguistic oppression” that the language is being victim as part of the cynical agenda to wipe the language out of sight in many countries. Finally I will be urging governments to respect international agreements that protect linguistic heritage and remind them their responsibilities in giving the language its full rights, including the right to be used as an educational and administrative medium.

We as a community and personally, would not have given so much to the language if governments did their job by treating the languages equally and not trying to push Fulah out! The motivation is rather an instinct of survival because the language would virtually disappear if we did not develop our aon strategy to codify, write and teach it with no official help whatsoever!

My dream is to reach a decent literacy rate that would make the language impossible to ignore. But our short term objectives include to have Android translated into Fulah, as our community is a “connected” people who use the smartphone daily and communicate thought apps. We are also looking for assistance to gather data for voice technology and terminology and dictionaries.

My ultimate dream is that everyone learn languages from their neighbours instead of trying to make them disappear!