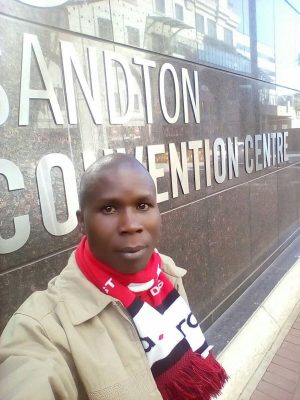 In 2019 as part of a social media campaign to celebrate linguistic diversity online, African language activists and advocates will be taking turns managing the @DigiAfricanLang Twitter account to share their experiences with the revitalization and promotion of African languages. This profile post is about Bonface Witaba (@bswitaba) and what he plans to discuss during his week as host.

I am a writer, local content developer and advocate, trainer, researcher, and consultant in Internet Governance and policy matters.

I am the pioneer of ICANNWiki Swahili, an encyclopedic website whose mission is to develop, translate, and localize 10,000 Internet Governance articles and glossary into Swahili for the 150 million Swahili speakers by 2020.

Additionally, I run a Youth Internet governance capacity building initiative aimed at mentoring students, academics, as well as individuals working in the private sector and; or government, through professional courses on the topic of Internet Governance, in efforts to help them understand its ecosystem

.RV: What is the current status of your language on the internet and offline?

According to Google statistics, Swahili content online is merely 0.08% as compared to English and other languages. With the world looking at connecting the next 1 billion internet users, it is believed that 17 million of them will come online using primarily their local language to access the Internet. The lack of sufficient local language content is thus likely to have adverse effects with regards to digital inclusion of these millions.

My hope is that with time, we will have sizeable Swahili content online and put the language at par with other global languages, and perhaps eventually have the United Nations adopt Swahili as a UN official language.

The fact that language is considered as a key to bringing people online, I am inspired more than ever to advocate for localization of online content, in efforts to remove the aspect of imbalance of local languages and content on the Internet.