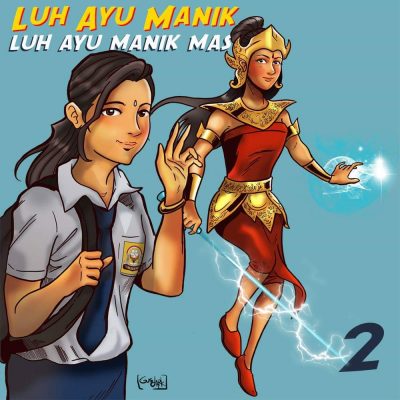 Each week, the upcoming host will answer several questions about their background and will give a brief overview of their language. This Q&A is with Luh Ayu Manik Mas, a fictional digital superhero created by the organization BASABali, (@LuhAyuManikMas1) who will provide a sneak preview of what she will be discussing during her week as host.

This dictionary is referred to as the BASAbali Wiki dictionary. The dictionary can be accessed via devices (e.g. laptops, tablets, smartphones) and is now available in the form of an Android-based application. There are several additional features in the dictionary such as virtual libraries (biographies, books, folktales, comics, places, lontar, short stories, and poems) and word games.

As a foundation engaged in preservation of Balinese languages, it is a challenge for us to invite more young people to take part in preserving the language. In the midst of the feeling of globalization and modernization, young people are now more often using English or other international languages in conveying their feelings or opinions on social media. We believe that young people are the bridge that will help local languages be sustainable. In this regard, we strive to make writings in Balinese on each of our social media channels so that young people can understand and want to be used also on their social media.

The focus that we will discuss through this Twitter account is how we use a different approach in inviting people to preserve their local language. We will use the character of a female digital superhero (Luh Ayu Manik Mas) that we created to tell her experience in preserving regional languages and efforts to protect the environment. So that everyone can understand the story that she wants to tell, we will use three languages (English – Indonesian – Balinese). In addition we will also insert a Balinese meme or word game.

Our hope in the future is that Balinese language is maintained and does not becomes extinct. We realize this effort is quite challenging amid the rapid development of the era and the demand for mastering English and other international languages. But we believe our efforts to preserve Balinese languages through digital platforms is the right first step to maintaining Balinese for sake of our children in the future. Hopefully this step can also be followed by other local languages especially in Indonesia.