Quichua, a language that sets us free 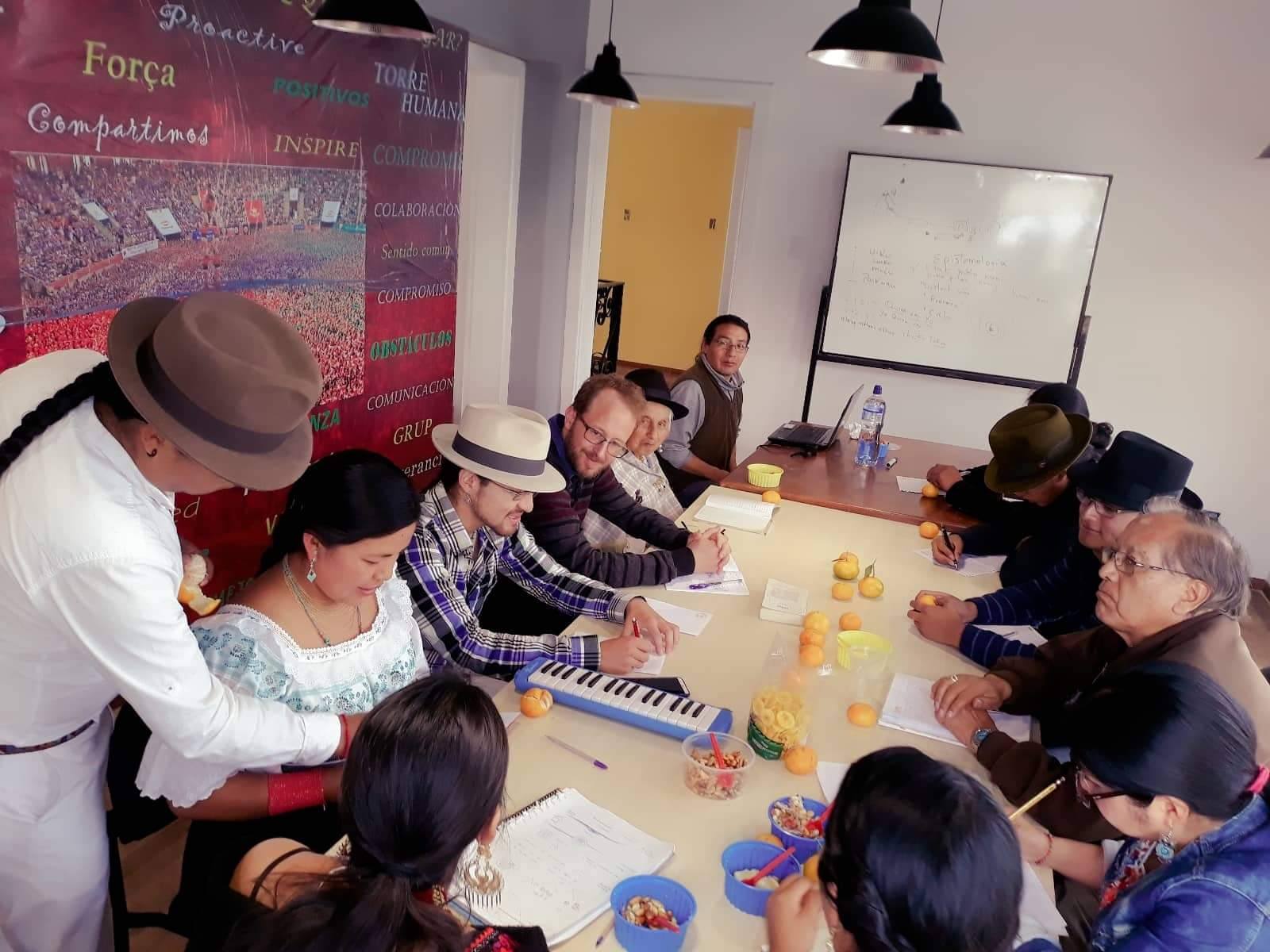 A group of students studying quichua, one of the ancestral languages of Ecuador. Submitted image, used with permission.

I was nine years old when, sitting at my grandma’s kitchen table, I was doing my homework one afternoon after lunch. The exercise entailed rendering in a drawing the subject of an assigned text about the way the Incas buried their dead. I've approached the hundreds of academic assignments I’ve done since then with a great measure of perfectionism, but there've been few times I put in as much effort as I did that day. It was as though, through my drawing, I was hoping to honour the character the text described, along with a whole culture that—according to what the assignment told me—had died as well.

In later history classes I was taught about colonization and miscegenation. From my teachers I learned about the formation of the Republic of Ecuador, the country of my birth. They taught us the names of Ecuador's presidents and took us to visit Catholic churches in the historic center of the city of Quito, where I was raised. I don’t remember any other mention of indigenous cultures in my school years, except for a brief encounter with the novel Huasipungo when I was close to graduating from high school.

My everyday reality, however, was different. A variety of indigenous clothing, traditions, and cultures had always been very present in my daily life. Moreover, my vocabulary, just like that of other Spanish-speaking Ecuadorians, was full of words borrowed from Quichua, one of the ancestral languages of Ecuador. I still play football on a ‘cancha,’ say ‘achachay’ when I’m cold, and I refer to my sister as my ‘ñaña.’ But until recently, Quichua was for me a language with which I cohabited, but I didn’t really know.

“Traditional education renders the languages, traditions, knowledge, cosmovisions, and philosophies of indigenous people invisible,” says Rasu Paza Guanolema, a member of the Puruhá community of Balda Lupaxi in the Ecuadorian province of Chimborazo. “They portray us as something from the past but, despite centuries of exclusion, we are still very much present.”

Rasu remembers having a positive relationship with education was while he lived in his community. But when he moved to Quito to study when he was 12 years old, his teachers made him abandon Quichua, his mother tongue, and adopt the traditions and knowledge associated with a language with European roots.

“It was a terrible experience,” Rasu says. “I felt bullied by my teachers and classmates because I was not one of them. They made it very clear to me that in their world, there wasn’t space for me. They led me to believe that the members of millenary cultures don’t have the capacity to learn, much less to contribute using our own knowledge.” After two years, Rasu went back to his community and started to work. When he was 20 years old, he resumed his studies at Chaquiñán College, where he was once again taught Quichua and invited to take pride in his culture, philosophy, and spirituality. In that way, he fell in love with his culture again.

Sharing the love of language and culture

Rasu’s love for language inspired him to pursue a university degree in Hispanophone literature. This time, he was able to confront the teachers who tried to make him feel that his culture and language didn’t have the same value as Spanish.

Rasu's commitment to his Quichua roots eventually motivated him to apply what he had learnt to the teaching of the language, which is a member of a linguistic family with variants spoken in seven South American countries.

Armed with the goal of increasing the number of Quichua-speaking people in Ecuador, Rasu joined Tinkunakuy in 2008. This organization, based in Quito, takes its name from the principle of relationality that is fundamental in the Ecuadorian indigenous philosophy. “In our view, people, nature, and the cosmos are related, we are all part of the same fabric,” Rasu explains. “It's an interaction among peers based on respect.”

This is the guiding principle under which the members of Tinkunakuy have taught Quichua to the more than 1,000 students who have attended the organization's classes in its 15 years of existence. Tinkunakuy also promotes political, promotional, spiritual, educational, and economic initiatives. Rasu also plans to write literary works to keep communicating indigenous knowledge in Quichua. “My objective is for as many people as possible to grow to love this language, and through it, learn to value a way of life different from the one imposed by the current system,” Rasu says.

With me, he achieved that goal. I have always liked the sound of Quichua, but because I have lived outside Ecuador for the past eight years, there was no opportunity for me to learn the language. Collaborating with a few indigenous communities through Rising Voices’ Reframed Stories project, however, had whetted my desire to learn Quichua, and when, almost seven months ago, I saw an advertisement for Rasu’s classes on Facebook, I asked him if I could take them online.

To my surprise, he said I could, and I had my first lesson the following Monday. Since then, I speak with Rasu through WhatsApp for 90 minutes each week. He creates a Google Doc, and I follow what he writes in real time. We also use an e-book with exercises that we review together, and I take notes by hand.

It's been less than a year since Quichua lessons have been available online. Initially, Rasu didn't have the technical knowhow to do this, but when he was invited to teach at a language institute he sought training in the use of digital tools. Now he's eager to keep exploring possibilities of creating audio files to support phonetic learning. Until then, he gives me music tracks with lyrics in Quichua that I can listen to while I clean my house or am out walking.

“It’s nice to know that distance is not a barrier anymore,” says Rasu, “and that anyone interested can learn the language from anywhere in the world.” I agree. I am learning Quichua from Canada, and there are students doing the same from the United States and Sweden. In this way, Rasu is able to share his heritage with us and we can make it our own from abroad.

Although most of my daily interactions take place English, a language that is not my own, thanks to the Quichua classes I feel closer to my country than ever before. And not only to the urban Ecuador where I grew up, but also to the ancestral knowledge to which I was not always exposed while living there.

Catharina Blomquist, another of Rasu’s students, has also learned about a new world thanks to Quichua. “I am from Sweden, and Swedish is my mother tongue, but I feel that Quichua is my language,” says Catharina. “I can’t quite explain why.” She remembers that when she visited Ecuador for the first time in 2017 she didn’t know Quichua existed, but as soon as she heard the language she fell in love with it and knew she had to learn it. She looked for classes online and found Rasu’s. “Quichua has a different way of thinking; it is a language that I find very profound,” she adds.

Quichua has its own logic, which changes our way of understanding and inhabiting the world. I’ve learned, for example, that in Quichua “I” (ñuka) is part of “us” (ñukanchik), and that one can’t exist without the other. I have also come to understand that time and space can be as inseparable as the two sides of the same page, that the future is the succession of the past, and that the present guides us. I have learned that illness can be regarded as something that visits us to show us that certain aspects of our lives might not be in harmony, and that death can be perceived not as an ending, but as part of the eternal return to life.

For Rasu, it’s only through a profound understanding of the language that we can truly comprehend these enriching ancestral concepts without emptying them from their true value. That is the reason he combines the teaching of this knowledge with grammar and vocabulary lessons. He finds it gratifying to see how they transform us, how inspired by the classes, some students have re-embraced the traditions, clothing, and traditional ways of life they had abandoned. Others have committed to supporting the language and the needs of indigenous people from their own spaces and experiences.

Nor can Rasu conceive of teaching Quichua without addressing topics such as the lingering consequences of colonization, still so prevalent in the present, racism, and land rights. Talking about these issues is essential to rectifying historical wrongs and to evaluate not only what we have learnt, but also what we have not. It sets us free.

“Quichua liberates us from repeating past mistakes and from others speaking for us,” Rasu says. “It allows us to express ourselves from our own views and perspectives, to denounce injustice, and to work together for diverse futures where we can live in this time-space-world-universe in harmony and mutual respect among people of different languages,” he adds. And thus I understand that Quichua bridges gaps—gaps that have been open for far too long.