The struggle of the Bolivian feminist chola is now online

The story of Yolanda Mamani, a feminist chola YouTuber 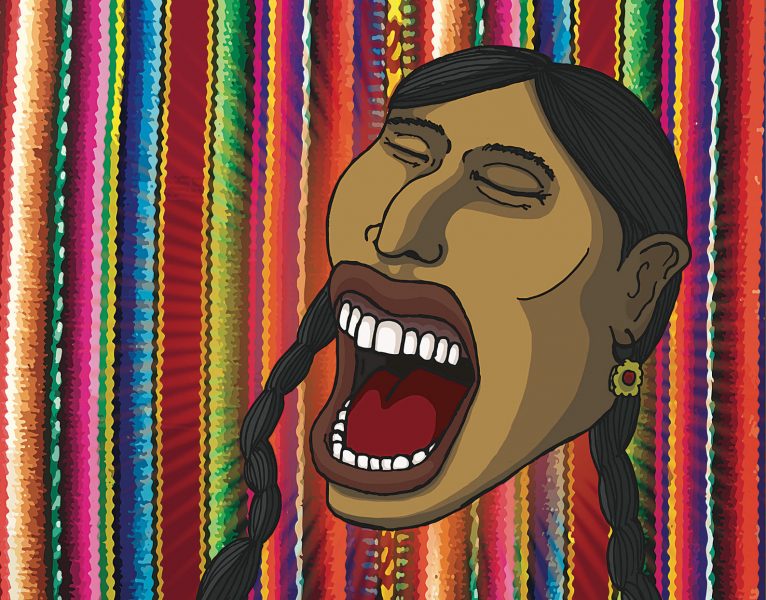 Cholas are the indigenous women of Andean Bolivia who have their hair styled in two long braids, wear a bowler hat, a blanket (or aguayo, a multicolored woolen cloth to carry something on their backs), and multifold skirt with layers of petticoats underneath.

What is the chola's place in Bolivia? How are Bolivian cholas presented in the media? How does academia talk about them? Do they participate in fashion shows? What about electronic parties? What political positions are available to them since Bolivia has had its first indigenous president for more than a decade?

To all these questions, Bolivian feminist chola Yolanda Mamani replies: “being chola is in fashion.” At the end of 2015, she began blogging and in 2019 that blog spun off into a YouTube channel called “Chola Bocona”, or loud-mouthed chola in Spanish. In videos posted on this channel, as if she were a primary school teacher or a broadcaster, Yolanda analyzes, with a feminist surgeon's precision, the role of cholas in Bolivian society.

Yolanda says at the 1:00 minute mark of her first YouTube video:

Imilla means “girl” in the Aymara language and can also be used as a derogatory term. Bocona is a person who talks a lot and demands too much. The “demanding girl” was how her employers called Yolanda when she was a domestic worker and fought for her rights of keeping to her work hours, wearing traditional garments, going to school, accessing social benefits, or going to college.

‘They want to treat us, cholas, as ornaments’

In the video, Yolanda recounts how the image of the chola has become popular while their philosophy of life was discredited. Cholas are invited to participate in politics, but their opinions or projects are not taken into consideration, at the same time as their image serves to boost politicians’ image and validate their candidacies.

She also talks about how in the entertainment contexts, such as fashion shows or parties that promote fusing the Andean with the electronic style, the cholas are folklorized, since their participation is limited to dances as embellishments. She describes that any activity that cholas do outside of domestic work is regarded as news, such as being legislators, public officials, skateboarding or launching a YouTube channel, like she did. Yolanda also claims that the academy has an external and superficial perspective on cholas. 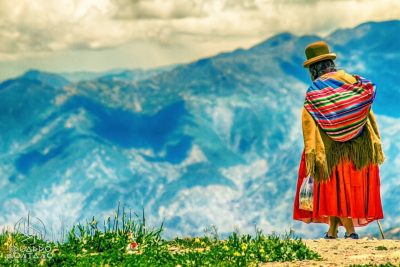 “There are women who use the skirt for convenience,” Yolanda writes in “The ladies who disguise themselves” post on her blog. She asks them why they use the pollera (skirt) for fashion or to access public offices and not to be sweepers or domestic workers. Given the use of the skirt as a costume, Yolanda emphasizes that, for her, the true meaning of being chola is to fight.

The meaning of cholas’ customs

Yolanda also explains what it means for cholas to braid their hair, barter, and participate in planting and harvesting. She talks about the harmony that such customs create in the cholas’ community, but also how they are affected by sexism, the desire to whitewash them and the consumerist vision of development.

She explains in her blog that braiding hair is a time for women to talk and look at each other, and brushing the hair is a way to get rid of the pain. Because of the importance of braids, cutting a woman's braid is a form of public punishment (for example, for adultery, for which there are no consequences for men).

In the blog post “Sowing and harvesting, an ideological encounter,” she explains that these activities represent a space in the community where locals and migrants come together, and where men and women, on an equal level, talk about politics and learn about national and international news. This space is unlike assemblies, where hierarchy rules and women are laughed at when they dare to speak.

Another blog post explains that bartering allowed for the exchange of food between farmers, but that now there are also merchants who participate in bartering by bringing expired canned foods. They cheat by providing spoiled products that make the community sick, and in return take the best of the crops. 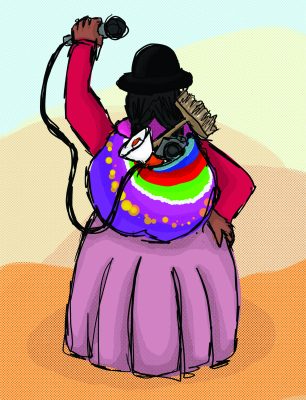 Drawing by Valentina Vilaseca for the Skyscraper Magazine (number 13, 2019). Used with permission.

Yolanda Mamani writes and speaks in the first person. She is, first of all, a chola, but also a member of the Mujeres Creando (“Women Creating”) feminist movement, a sociology student, manager of the Chola Bocona vlog and of the Ser chola está de moda (“Being chola is in fashion”) blog. She is also the producer of Warminyatiawinkapa (in Aymara, meaning “The Women's News”), a program broadcast on Fridays by Radio Deseo of Mujeres Creando in La Paz city.

The same radio station also broadcast the “Trabajadora del hogar con orgullo y dignidad” (‘Housekeeper with pride and dignity’) program produced by Yolanda together with two colleagues from the Home Workers’ Union of Sopocachi. They, along with other women, had taken a radio training course offered by Mujeres Creando.

When Yolanda Mamani was reporting for her first radio program, she decided to cover the VIII March by the Isiboro Sécure National Park and Indigenous Territory (Territorio Indígena y Parque Nacional Isiboro Sécure in Spanish, or TIPNIS, as it is usually referred to), the indigenous territory and national park in the Bolivian northeast through which a controversial construction of an interoceanic highway has been planned. That experience motivated her to study sociology.

‘The world is not possible without loud-mouths’

Yolanda Mamani, whose mother tongue is Aymara, learned Spanish when, aged 11, she moved to Bolivia's capital La Paz city to live with an aunt who made her work as a nanny in exchange for lodging. She had to be employed for 12 years as a domestic worker and in that house she worked for 11 years. She received less than 50 USD per month and had no social benefits. She demanded to go to school and was fired when she wanted to go to university. When she was a child, her father took her to school on an hour and a half-ride on a donkey. Yolanda was born in Warisata, 15 kilometers off the east coast of Lake Titicaca.

Yolanda's life is marked by the struggle to be a chola who goes to school, migrates to the city, learns Spanish, is a domestic worker, does not give up wearing pollera, goes to college, unionizes, is active in politics as a feminist, goes to university, is a broadcaster and is now a feminist YouTuber chola. Whatever her next step may be, this loud-mouthed chola will continue to provide us with thinking in the first person, analyzing the spaces of power and sharing our findings. Not surprisingly, she ends her videos by saying: “The world is not possible without loud-mouths.”

Cholas are the most promoted Bolivian cultural icon. Historically, they have been discriminated against: from being excluded from political participation in their communities, through the prohibition of using public spaces or transportation, to domestic work—as one of their few job opportunities when they migrate to cities—in conditions of slavery, exploitation, and sexual, physical and psychological violence by their employers. In fact, giving up wearing their traditional clothing is one of the forced strategies through which they can access better opportunities.

Currently, after at least 60 years of social struggle, cholas’ place in society has gone from systematic marginalization to efforts to valorize them. However, they still have fewer opportunities than non-indigenous women to exercise their rights to access education, health, justice and decent employment, among others.

Although colonialist forms still persist today, such as enslaving them, erasing them from the social scene and demanding that they do not dress like cholas, it is possible to see them as legislators, public officials, journalists and television hosts, businesswomen, teachers, university students, carpenters, chauffeurs, policewomen, actresses and models. Such roles are cause for news, which confirms the multiple levels of discrimination that still exist.