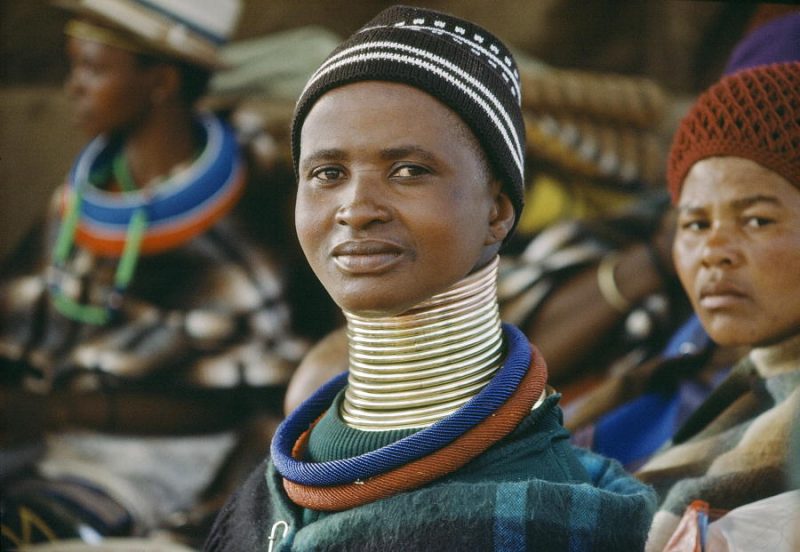 Khoekhoe [3] and Ncuuki (or N|uu [4]) languages that have seen more sunrises and sunsets than most South African languages.

Khoekhoe can be heard across  South Africa in three everyday words, dagga (“cannabis”), nai (“pan flute”) and kak (slang for “feces” or “rubbish”). The influence of place-names, such as karoo (“dry place”) is also a reminder of the language’s history in the country.

The history of Khoekhoe, once spoken by many Khoekhoe groups for thousands of years, is now only spoken by a few in the Northern Cape. The only surviving speakers of Ncuuki are well advanced in age, with the language nearing extinction [5].

Bantu languages are a sub-branch of the Niger-Congo languages. Khoekhoe, a non-Bantu language, is spoken nearly exclusively  [7]in Namibia.

Khoekhoe is not an official language in South Africa. It is neither recognized as a first language, or mother tongue, nor taught in South African schools, making it even more difficult to reverse the trend of language loss.

This invisibility in the South African national narrative can also be seen by the language’s absence on the internet. From personal experience, I have seen the uphill battle to exercise citizens’ right to free expression in their native languages both online and offline, but a battle I have yet to give up.

Kakapusa (“erasure,” “amnesia” or “forgetting”) is one of my most used words, that really encapsulates the kuru (“work”) that I do as an advocate for the officialization of Khoekhoe and N|uu, two of southern African’s first languages.

I am not hoaragase (“complete”) until I take full possession of my heritage. Sadly, though being Khoekhoe, I am forced to think in and speak the language of tsu-khoen (“oppressors”) who dehumanised my people.

Africa is my home, but I cannot commune with my ancestors. How can I ever know vkhîb (“peace”) when foreign words echo within my soul? The vuru (“healing”) of my being will only start with the kawakawas (“restoration”) of my nam (“mother tongue”).

Kakapusa defines South Africa's post-Apartheid era. A postcolonial narrative predicated on the deliberate, institutionalised and normalised erasure of its first people of this country.

The injustice of the legacy of colonial rule and apartheid on South Africans is excruciatingly terrible. However, the impact on South Africa's first people is more brutal since it resulted in the systematic loss of first languages.

Unfortunately, the injustice continues to date, in post-apartheid South Africa, where major actors — governmental and nongovernmental — all pay lip service to the restoration and preservation of first languages like Khoekhoe and Nccuki.

Last year, President Cyril Ramaphosa of the Republic of South Africa made [8] kaise isa (“beautiful promises”) to Auma Katriena Esau, one of the last [9] remaining speakers of Ncuuki, that he would do everything in his power to see that no language dies. Yet very little progress has been made after that announcement. The trap between intention and performance by state actors in regard to language issues persists, asserts linguist scholar [10] Anne-Marie Beukes.

And yet, we, the owners of what is certainly one of Africa’s greatest linguistic treasures, have been subjected to linguistic imperialism, ostracisation and the dehumanisation of our mother tongue. We have been belittled, disconnected from the Republic of South Africa and the African continent.

It has been a battle against perpetual exclusion, demanding visibility in a space, in a country comforted by the silence of our voices.

From April 20 to 24, Denver Toroxa Breda (@ToroxaD [11]) will be tweeting on #IdentityMatrix [12] – a social media conversation on identity, language and digital rights – from this handle.

Breda, a Khoe languages and cultural Kuwiri (activist), is from South Africa. pic.twitter.com/9UTpKJrBR3 [13]

Some might not consider using one's own language on the internet to be a digital right. However, increasingly it is becoming recognized as a fundamental right in many circles.

The African Declaration on Internet Rights and Freedoms states that [15]:

Individuals and communities have the right to use their own language or any language of their choice to create, share and disseminate information and knowledge through the Internet. Linguistic and cultural diversity enriches the development of society. Africa’s linguistic and cultural diversity, including the presence of all African and minority languages, should be protected, respected and promoted on the Internet.

I have been an active voice on social media calling on public and private institutions to take this important issue seriously in both offline and online spaces.

From my own Twitter handle (@ToroxaD [16]), I have been able to critically challenge these institutions that I feel are guilty of perpetuating such exclusion. It is often easy, convenient, to ignore me — one of the very few voices that oppose this linguistic and cultural inequity and injustice.

Universities also perpetuate exclusion [17] — for the past 26 years, they have done little or nothing to u-khai (“uplift”) first languages in South Africa. I challenged companies like Macmillan publishers who hold the copyright for first language materials but seemed very reluctant to democratise our content by making them freely available, and thus encourage further language learning.

And yet I also knew that the past week offered an opportunity for engagement with institutions that would otherwise ignore me. I was as intentional in exploiting this opportunity as they were to erase us.

The South Africa Book Development Association organises the National Book Week, an annual event [18] that promotes languages and the development of books. For almost a year, I have engaged them on Twitter and emailed them, all to no avail. I also noticed that Book Week was featuring online reading sessions in Abantu languages, sign languages and English but not a single first nation language like Khoekhoe.

But tweeting from my gobab khais (“language revolt”) platform, I made sure to tell them how I felt. They finally responded:

We are also currently busy developing a Children's Literature Project that will include at least one of the languages. We are only in the 4th week of Online Storytelling and have expanded the languages included with each week and will continue to do so. (2/3)

Obviously, I was shocked because, for the last two years, they behaved like a rock and resisted any attempts to move Khoekhoe. And here they were, responding and talking about a Khoekhoe language program they ran, a future children’s project and the possibility of including Khoekhoe in future digital storytelling sessions, which was what I really wanted. An email was sent and I am hopeful.

Another example was when I contacted a developer to include the first Khoekhoe language app on the Google app store:

In effect, this week gave me an opportunity to reflect. It was also a reminder of the importance of gobab udawa (“language reclamation”) work in a digital space.

I remember speaking to my community about my tweets and some really appreciated that our voice was amplified internationally. It is quite a challenge for a first nation like the Khoekhoe community with 366 years of intellectual, cultural and linguistic colonisation to realise that to qnora (“liberate”) our tongues is valid work.

This language gave the world mama (ma in Khoekhoe means to “give”) and the word haka [22] (a dance). Hence, the udawa (“reclamation”) of Khoekhoe is equally important for our continent— it's a language rich with such historical origins and narratives of Africa that should never be allowed to fade into extinction.

This article was written following a Twitter campaign [23] organised by Global Voices sub-Saharan Africa and Rising Voices as part of the project, “The identity matrix: Platform regulation of online threats to expression in Africa”. The Identity Matrix is funded by the Africa Digital Rights Fund [24]of The Collaboration on International ICT Policy for East and Southern Africa [25] (CIPESA).