'We are focusing on marginalized oral languages' 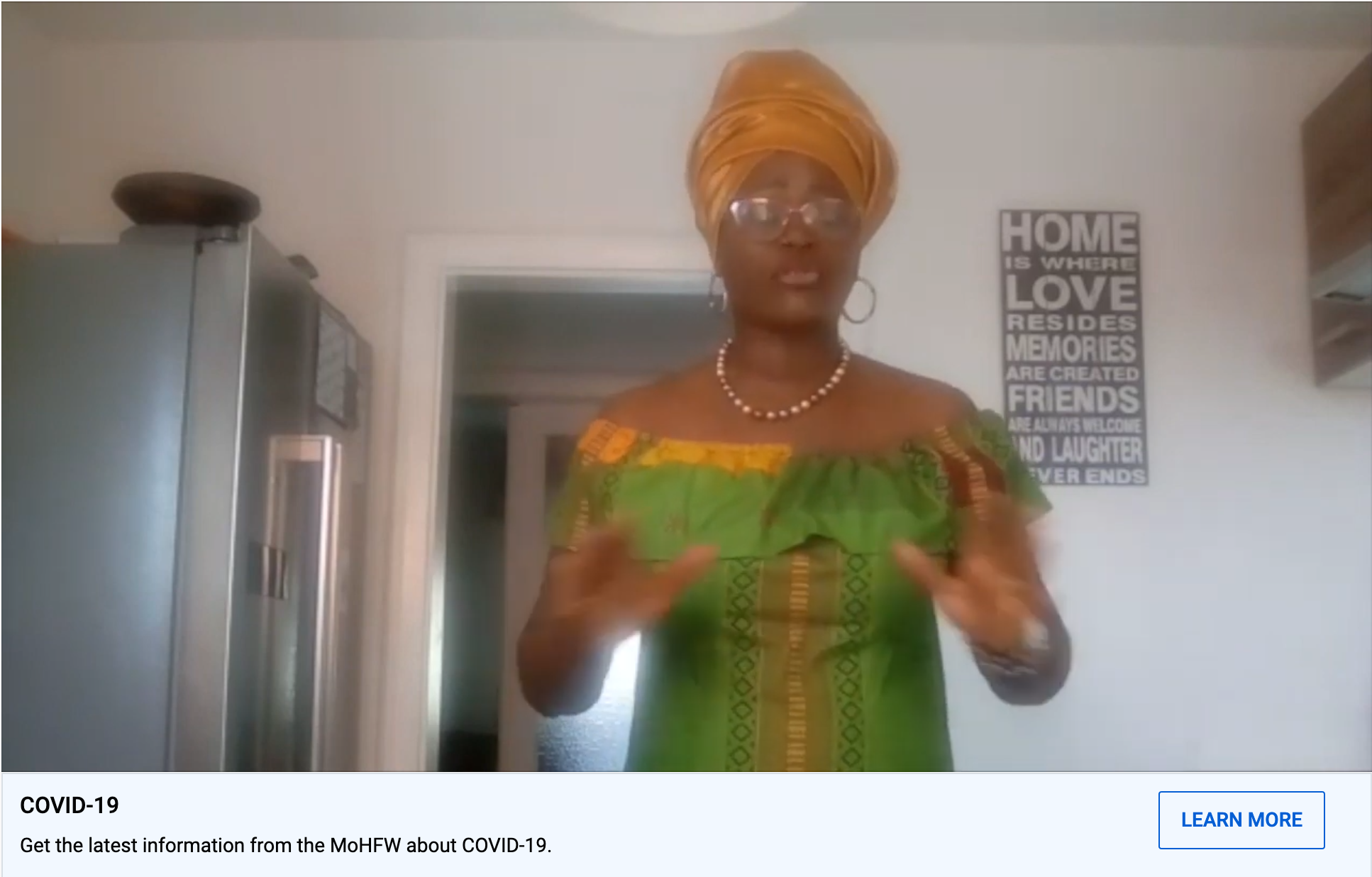 Screenshot of a Bafut-language video from Cameroon. CC BY-NC-ND 4.0

Check out Global Voices’ special coverage of the global impact of COVID-19.

Ensuring that local communities have access to reliable information about COVID-19 is a challenge for governments and organizations like the World Health Organization (WHO) — one that is compounded for speakers of minority languages.

In response to this challenge, the virALLanguages initiative is working with local community leaders around the world to share basic COVID-19 health information via audio and video through the use of “proverbs, metaphors and diverse rhetorical strategies” to speakers of minority languages.

VirALLanguages is a collaboration between the KPAAM-CAM project/Community for Global Health Equity at the State University at Buffalo in the United States, and the School of Oriental and African Studies’ World Languages Institute at the SOAS University of London in the United Kingdom.

The initiative provides supporting materials for videos distributed on YouTube and Facebook under a Creative Commons license. As more language communities from across the world join, the coverage in more languages will grow. Videos are downloadable from the Internet Archive.

So far, the project has worked with seven different languages — all from Cameroon, one of the most coronavirus-affected countries in the region with at least 2,265 cases as of May 9. In a country of 250 different languages, a linguistic divide exists between speakers of majority French and minority English — both languages brought through colonization. The three-year-long French-English linguistic conflict has led to the displacement of 500,000 people.

In October 2019, Rising Voices spoke with linguist Mandana Seyfeddinipur who heads the SOAS Endangered Languages Documentation Program, during the Decolonizing the Internet's Languages Conference in 2019, to learn about the critical role of indigenous languages in the access of information. When the coronavirus pandemic hit, Seyfeddinipur's insights informed a podcast episode entitled: “Indigenous Languages In The Times Of A Pandemic”:

Rising Voices recently reached out over email to linguists Mandana Seyfeddinipur, Pierpaolo Di Carlo and Jeff Good — all project directors of the virALLanguages initiative — to learn more, and they responded as a group:

Subhashish Panigrahi (SP): Tell us a little bit about this project. What is the key issue you are trying to address and what is your larger goal?

virALLanguages (VL): We're targeting marginalized languages which also means languages that may not have a writing system, and languages that are spoken by relatively fewer people, or are not used for official purposes like spreading information about a pandemic. As public authorities tend to share vital health and other public information related to coronavirus, many marginalized communities might not understand sufficiently. There are also social and cultural barriers in addition to such linguistic barriers. Experience from other health crises has shown that pure translation into major languages does not seem to be enough for life-saving behavioral changes. We are aiming to fill this gap with our work based on our experience working with marginalized communities.

We're working to create a network of people who are willing to not only translate key messages in marginalized languages but to adapt them to local contexts so that people will understand what to do in potentially endless circumstances.

SP: How you are trying to deal with these challenges at virALLanguages?

VL: So, we use reliable health advice (WHO) which speakers of marginalized languages then translate by making it as culturally appropriate as possible. We are also attempting to enable acceptance and trust by involving spokespersons who are trusted locally, like traditional authorities, local medical doctors, or other figures that are respected and listened to by the local communities.

The recording is played back to the other speakers for checking and if there is a larger agreement for the distribution through the relevant channels in a given community — social media channels or community radios or even mobile apps.

SP: How many languages or communities are you targeting?

VL: Well, the project title is telling. We target the other languages — those that major institutions cannot target, so that important messages reach as many people as possible in different ways.

SP: What kind of languages are you focusing on and why?

VL: We are focusing on marginalized oral languages, and those languages in which vital and general health information are rarely distributed. We are trying to reach out and to build a network of people who can then use the workflow and resources built by us for their own languages. So, we are responsive on the one hand and proactive on the other. We have started proactively in Cameroon, considering our past experience there and the presence of a very close network. … We're also reaching out to those who worry that information only in writing or in majority languages will not reach many people, and may not be trustworthy by all. Our effort is to help communities disseminate crucial and life-saving information in oral languages, and extend the usage of such languages.

SP: What is expected from any interested indigenous language speaker or a community of a marginalized language?

VL: The project website has resources that can be used as guides for local communities to create their own video content. We encourage the communities to include anything that is culturally appropriate while still retaining the essential health advisory intact. They can look at the scripts in English to create a script of their own while addressing local context including proverbs, metaphors, and other culturally appropriate features to make the messaging more impactful. Those who are interested to join us are required to read a reference text and pass a short quiz. This test ascertains that the potential contributors can produce a message that, while culturally appropriate, will still convey accurate information.

SP: How are you sharing the videos apart from YouTube and Facebook, especially in the target languages?

VL: Our local collaborators know best what the appropriate channels are in a specific demography. … We are now downsampling our recorded files to make them available on Archive.org … for viewers to download. Some teams have proposed to engage with radio channels to broadcast the audio content in local radios. We have done this for the Mafa language that is spoken in the extreme north of Cameroon, through a local radio channel, “Radio Échos des Montagnes.”

SP: As marginalized and oral language speakers are your focus, how do the communities and you yourself plan to spread these videos more widely?

VL: …Communities [are] key. Once audios and videos are downloaded and shared as files by the communities, we have no way of measuring their impact. We must rely on our local collaborators to tell us if our output is effective.

The project directors told Rising Voices that VirALLanguages intends to grow its coverage in more languages by inviting contributors to form teams of marginalized speakers to create content. Those with connections to communities of minority language speakers can also form local language teams, and the project is actively looking for volunteers and support for local radio stations, who help disseminate audio files in local languages. Anyone can also get in touch with the virALLanguages volunteers to donate to such language teams who need financial assistance for the video production.

Indigenous communities face a greater risk because of the coronavirus, prompting the United Nations Department of Economic and Social Affairs (DESA) and other experts to urge the sharing of critical health advice in more indigenous languages.

Editor's note: The author of this post has volunteered for the virALLanguages project.