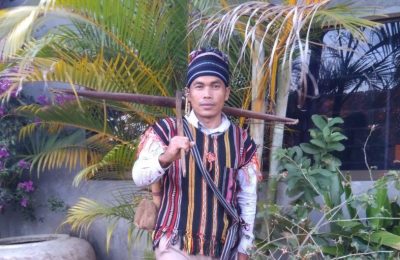 Each week, the upcoming host will answer several questions about their background and give a brief overview of their language. This Q&A is with Sok Socheat (@cico_ip) who will provide a sneak preview of what he will be discussing during his week as host.

Sok Socheat (SS): My language is the indigenous language called Bunong, which doesn't have a writing system. We can use the Khmer Script to write our language, though it's not very widespread.

I am a member of Cambodia of Indigenous People Culture Care’s Organization (CICO), an organization that promotes and encourages respect for human rights, especially for indigenous peoples throughout Cambodia. We are currently working on a project called “Voices of Indigenous Peoples with disabilities“, through which twenty-five indigenous people with disabilities from three different communities are able to express themselves, demand the protection of their rights, and seek legal support whenever their rights are abused. They use two languages (native and Khmer language) to raise awareness of approaches to law and rights protection for people with disabilities.

SS: The main languages of communication are Khmer and English and occasionally Bunong language, depending on the target group and the circumstances. Few people from my community try to post in our mother tongue online.

In daily conversation in the community (in rural areas), we still communicate in Bunong but those who are living in towns or cities have stopped using their native language, because they don't dare to speak it.

SS: I will focus on religious minorities because this is something that affects indigenous people a lot, especially those living with disabilities.

SS: The main motivation leading CICO to participate in this week’s Twitter campaign is the desire to share with the world what Bunong is and show the importance of this indigenous language and culture to the outside world. I hope that my language will be recognized worldwide in the near future.