WhatsApp is the new tool for Venezuelan feminists during the pandemic

WhatsApp is a cheap and effective way to organize support groups 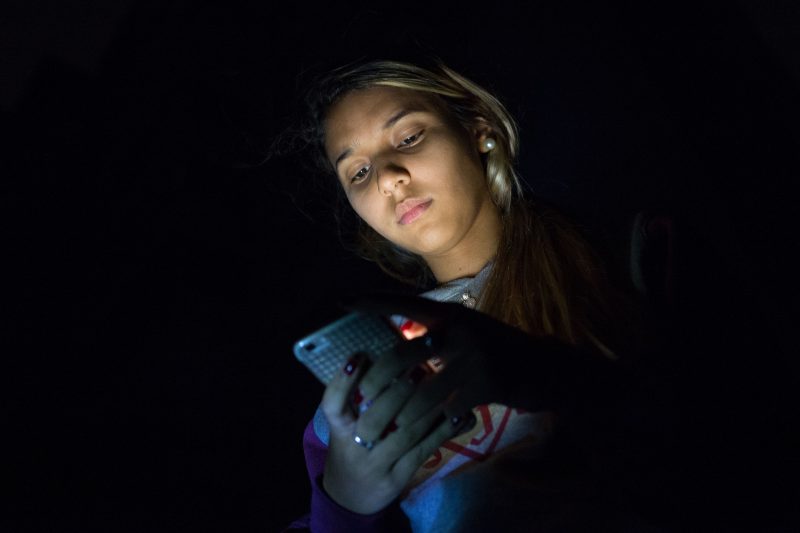 Woman uses cellphone during a blackout in Caracas. Photo by Cristian Hernández. Used with permission.

Since the beginning of the pandemic, feminist collectives in Venezuela and international NGOs have warned about the rise of domestic violence during the strict quarantine measures implemented in most Venezuelan cities. International children's rights organization Save The Children, reported a 33 percent increase in demand for support for gender-based physical, sexual, and emotional violence in Venezuela since the beginning of the pandemic in March. In the first eight months of 2020, 172 women have been murdered in Venezuela — one femicide every 43 hours.

Uquira educates on the principles of contemporary Feminism

Before the pandemic, members of the Caracas-based feminist group Uquira would often take to the streets to denounce government negligence, the culture of gender violence, and machismo in Venezuela. After the pandemic, Uquira has been forced to rethink their work dynamic. They have turned to organizing interactive conferences on WhatsApp, called foro chats. Uquira member Melanie Arguinzones told Global Voices:

WhatsApp is a great tool in the Venezuelan context. Most women don’t have a computer or a stable internet connection to attend Zoom meetings. For many this can be the only way, and cheapest way, to share information, share experiences, and ask for help. […] Foro chats became a great way to invite experts to share their knowledge on a subject related to gender. This new dynamic is also more inclusive, because it allowed us to reach women outside of Caracas.

Since the pandemic started, Uquira has organized four public foro chats about the fundamentals of feminism, feminist self-care, and debunking conspiracy theories about LGBTQ communities. The last forochat, about sexual politics, was a private course for members of Uquira.

In these forums, participants register in a Google doc and then receive links to enter a WhatsApp group. On the day of the talk, moderators greet participants, share group rules, and introduce the invited guests. Then, the guests discuss the topic through photos, texts, and audio messages while the rest of the participants are blocked from sending messages. At the end, the moderators open up for a round of questions for about 40 minutes.

Experience has taught Uquira to take security measures, like mandatory registration and keeping the group closed before the questions round. “At first we got some trolls who got inside the groups to insult us and send obscene pictures. Still, it’s a necessary space for us. We want to use as many communication channels as we can because we want our message out there,” Arguinzones said.

#JusticiaParaTodas offers a support group for families of victims of femicide

When Ketsy Medina’s mother was murdered in 2018, she knew she had a long path ahead of her to find justice. Indeed, the legal process to find her mother’s killer has been slow and challenging. Soon, she realized it wasn’t worth fighting Venezuela’s legal system alone. She created a WhatsApp support group called “#JusticiaParaTodas” (Justice for all) for women going through the same ordeal as her. By phone call, Medina said:

We started this group so families of victims could build a space to share information, updates and support. We pressure institutions through social media with the information we gather; but the group offers something that’s fundamental to heal a wound as big as a femicide of a loved one: companionship, understanding, and support.

Ketsy explained that the group’s name is the same hashtag they use on social media to denounce gender violence and state negligence:

In 2019, Daniella Inojosa, founding member of feminist collective Tinta Violeta saw the need for a women's helpline. She explained via WhatsApp:

When faced with the pandemic, we started thinking: What sort of support do women have if they are victims of violence? Where do they get help, attention, and a space to denounce it? Sadly, in Venezuela there are none.

So, Tinta Violeta made the phone numbers of some of its members public and created a helpline on WhatsApp. Volunteers work from 6am to 10 pm support, listen, and advise women living with their abusers during the lockdown.

“We started to invest time in our support project in 2019 because we wanted to understand how to support women in alternative ways during a situation of violence,” she said. Inojosa also explained that a big percentage of the women that have called or written them have already denounced aggressions by their partners to the pertinent legal institutions. “They are abandoned by the system,” she continued.

Inojosa describes the experience as a big responsibility resting on the team’s shoulders. “We have to deal, at a distance, with pretty violent and distressing situations,” Inojosa said. Since the beginning of the pandemic, Tinta Violeta has supported 215 women, and 500 people in total. “We also support direct or indirect victims of violence, which is usually the case of children”.

It was no surprise for soup kitchen Alimenta la Solidaridad to learn that their cooks are also fundamental pillars of their communities. “They are trusted women, in contact with many families from the communities through the comedores comunitarios [‘community dining rooms’],” Mariana Luengo told Global Voices through a phone call. She is a volunteer psychologist for what became chat forums on gender violence organized by Alimenta la Solidaridad. The goal was to support the cooks in helping victims of abuse. “[The cooks] were also eager to learn how to help and advise women and children who confessed violence at home,” Luengo continued.

Alimenta la Solidaridad invited psychologists and lawyers from the Catholic Andrés Bello University to chat with the cooks on how to best assist the community. Luengo continued:

The experience was particularly enlightening because of the many questions they had; each had a very particular approach after having heard neighbours talking about their experiences of violence and having lived abusive situations at one point or another in their life. The women were particularly focused on the idea of helping others, so having a team of psychologists and lawyers helped them understand how to support and advise on legal measures against abusers.