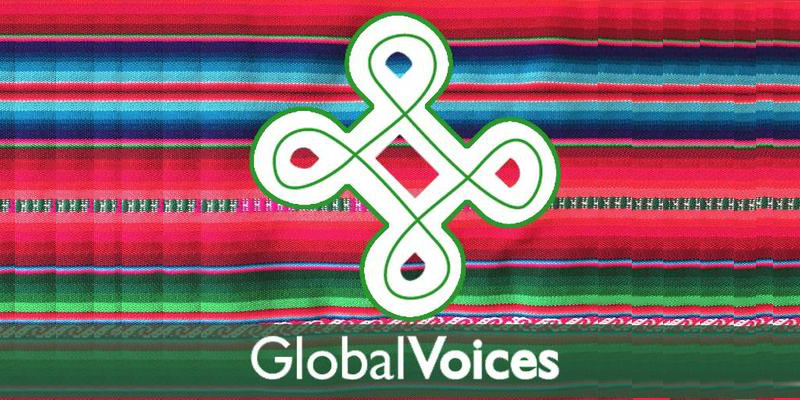 Global Voices in Aymara was recently awarded a grant by Internews to create digital security resources in the Aymara language for a new project called Apthapi Digital. The term “Apthapi” refers to a traditional practice in Andean cultures where families share part of their food harvests with others in the community by gathering and placing what they have to offer on a traditional aguayo (or textile). Following in the same spirit of sharing, except in this case it is the sharing of knowledge with others, this project seeks to reach a new audience that may not traditionally have access basic digital security information.

Aymara is a language spoken by close to two million people in the Andean region, including the countries of Bolivia, Peru, and Chile.

Starting in early October, two members of the GV Aymara team, site manager Victoria Tinta and translator Elias Quispe Chura will be translating and localizing five articles focusing on basic mobile phone security, stronger passwords, precautions against malware and phishing, safer web browsing practices, and about the importance of protecting personal data. These resources will be published on the GV in Aymara page accompanied by special illustrations by Nicaela León, a local artist who is a co-founder of the project Phuyu. GV in Spanish member Jacobo Nájera has also been advising this process due to his extensive experience in the field of digital security. Rising Voices will be helping to coordinate project logistics.

Instead of building new resources from scratch, the project will be partnering with two regional organizations, Código Sur, which has been producing accessible digital security resources in Spanish through a project called Milpa Digital. In addition, the Ecuador-based organization Huaira, has been adapting the previously mentioned resources and translating them into the Kichwa language through their project Shigra Digital. This new project will be building off these resources that have been made available in Creative Commons licenses.

Since many Aymara speakers in Bolivia, Peru, and Chile do not read or write the language, it is extremely important to make these newly localized resources accessible. Once the translations are complete, short audio versions in Aymara will be adapted for this target audience through a collaboration with the Cochabamba-based radio production organization CEPRA.

A large part of the thinking behind this project came from an earlier project run by GV Aymara to produce audio versions of the translations. The team recognized this need to reach Aymara speakers who may not have regular access to the internet and who consume and share information via oral communication channels.

Finally, as the development of the resources get underway, the team will conduct outreach to Aymara organizations in Bolivia, Peru, and Chile asking them to share these resources with their networks and members. There will be a special focus on community radio stations that regularly broadcast in the language.

Stay tuned for the completed project in early November.