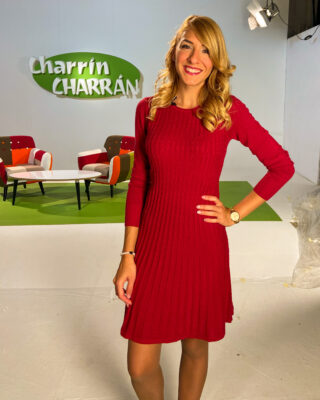 Photo provided by Silvia Cebolla and used with permission.

As part of our ongoing series highlighting the work of activists promoting European minority and regional languages in digital spaces, we would like to feature Silvia Cebolla (@silviacebolla) who has been working to promote the Aragonese language through creative online and broadcast programming.

While the language in its many dialects has shown a revival in many domains, the General Office of Linguistic Policies of Aragón, Spain estimate that there were only between 10,000-12,000 active Aragonese-language speakers, which equals to approximately 1% of the Community's population. However, efforts to raise awareness and provide more visibility have been more common, such as through the work of Silvia who has been using both traditional and online media to promote the language.

Find out more about these initiatives in the following e-mail interview conducted by Rising Voices.

Silvia Cebolla (SC): I have a law degree and a Master's Degree in Gender Relations, but since I was very young, my great passion has been learning and the sharing of the Aragonese language. I am from Zaragoza so Aragonese is not my mother tongue, I am a neo-speaker. I learned the language at a school in Zaragoza called Nogará.

In 2010 I started a hospitality business in which the Aragonese language was the common thread and later I decided to make the leap to Youtube with a vegan cooking channel entirely in Aragonese.

From then on I started sharing content on my social networks in the Aragonese language. In 2019, I started presenting the program called Charrín-Charrán, which was the first Aragón television program in Aragonese.

Promotional video for the program

SC: The Aragonese language is currently in a very fragile situation due to the number of speakers that has been considerably decreasing with a noticeable break in generational transmission. But in recent years, there has been greater interest in its revitalization generated by the years of activism carried out by associations and groups dedicated to language promotion. This increased interest can also be seen thanks to social networks that have been a critical tool for the language's visibility.

BG: I believe that social media plays a great dissemination role allowing us to reach young people and social spectrums that were previously impossible to reach. They also allow us to use another type of communication, language, and content that provide another vision of the language. Today, digital spaces are an excellent tool for revitalizing minority languages.

KS: What concrete steps do you think could be taken to encourage young people to start learning your language or continue using it?

SC: It would be very important that the Aragonese language have much more presence in the school environment, unlike now where there are only specific subjects or in specific centers. Another interesting measure would be for institutions to generate attractive content for young people in this language, such as podcasts, cartoons, fiction series, etc.