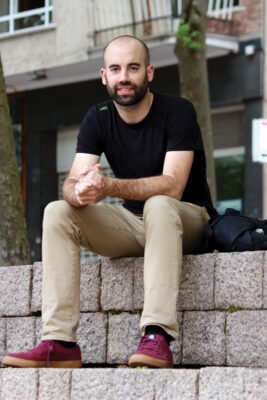 As part of our ongoing series highlighting the work of activists promoting European minority and regional languages in digital spaces, we would like to feature Beñat Garaio (@BGaraio) who has been working to promote the Basque language by organizing initiatives and events, engaging with diaspora communities, and taking part in academic support activities. Beñat is based in the Basque Country of Spain.

Find out more about these initiatives in the following e-mail interview conducted by Rising Voices.

Beñat Garaio (BG): My young but active career has focused on the study of the revitalization and sociolinguistics of minority languages and the organization of awareness-raising and dissemination activities in both areas. I have organized or co-organized initiatives such as Hitz Adina Mintzo, HIGA (Summit for Young Speakers from Minoritized Languages) and Euskarabentura and I have been quite active publishing and sharing my academic works.

I was raised speaking Basque at home in my hometown (Gasteiz), but I was not using it with my friends or my daily life until I moved to Idaho (USA), where a large Basque community is based and I was amazed by their efforts to preserve their language. Back home, I started participating in different initiatives until I moved to London to get the MA Language Support and Revitalization at SOAS University and pursue an academic career as well.

Since then, I have been involved in many initiatives but networking between language communities worldwide is what touches me the most.

BG: Basque is a quite vivid language in terms of language speakers, resources and possibilities to learn it and use it. However, this depends on the region as the Basque Country is divided into three regions (two in Spain and one in France) with different official recognition. Also, Basque speakers are a minority here and you might have large areas where Basque is barely spoken, whereas in some others Basque is the main language.

Online speaking, Basque is one of the top-languages in some of the most important websites (e.g. Wikipedia, Twitter, etc.), but we have an overwhelming content in Spanish, French and English, in comparison with Basque.

I also speak Catalan and we share some of the challenges, although Catalan is doing better in some aspects (prestige, amount of speakers, etc.).

BG: I am doing research with children from areas where Basque is the main language and even in their case they are much more attracted by the content created in the USA, Italy, Korea, Argentina. We live in both spheres of our lives, let’s call them physical spaces and digital spaces, but we enjoy more the second one.

We, minoritized languages, must be visible and attractive online if we want to have a chance to preserve our language, identity and culture.

Obviously, we cannot compete against the latest release in English, but we have to find the way to make our language appealing. I am aware there is more life outside the Internet, but we really need to react fast in this matter: those kids I mentioned are already speaking English or Spanish from South America with their classmates and closest friends. That is my motivation, to be honest, but also, I really enjoy social networks and watching digital content and I would rather do that in my language.

BG: Everything is in English, Spanish and to a lesser extent French and younger generations, at least, understand those languages with no problems. In fact, these languages do not have many stigmatizing tags as Basque could and learning, speaking and consuming content in these languages is perceived as normal and/or trendy.

A ‘small’ language community, such as Basque (700K speakers) is not big enough to convince big companies to produce much content in the minoritized language and even though our cultural capital is high, we could say there are not enough consumers for the content in Basque. That can be applied for music and literature, but also for movies, series, and social networks and so on.

We are very aware of this big challenge and I know there are many groups trying to revert the situation; even big corporations are coming to an agreement with Basque institutions to create content in Basque. So we will see how it goes, but I cannot be and I am not too pessimistic about the current situation.

KS: What concrete steps do you think could be taken to encourage young people to start learning your language or continue using it?

BG: First of all, younger generations should have the opportunity to learn Basque since they are 3 years-old until they finish university, as this is not possible everywhere. Basque speakers should be able to use our language in any given situation and non-speakers must be capable of, at least, understanding the language and not forcing Basque speakers to switch to Spanish or French in those cases.

Basque should be seen as both more attractive and necessary in order to gain more prestige and institutions need to take more aggressive/brave measures to enable that.

When it comes to the digital space, we, as Basque speakers, need more content in Basque and must have more resources to create our own content in our own language.

The language competence of the youngest generations is the highest in our history, we are a rather wealthy nation and the attitudes about our language are quite positive. Therefore, it is crucial to take this advantage if we are to revitalize our language.