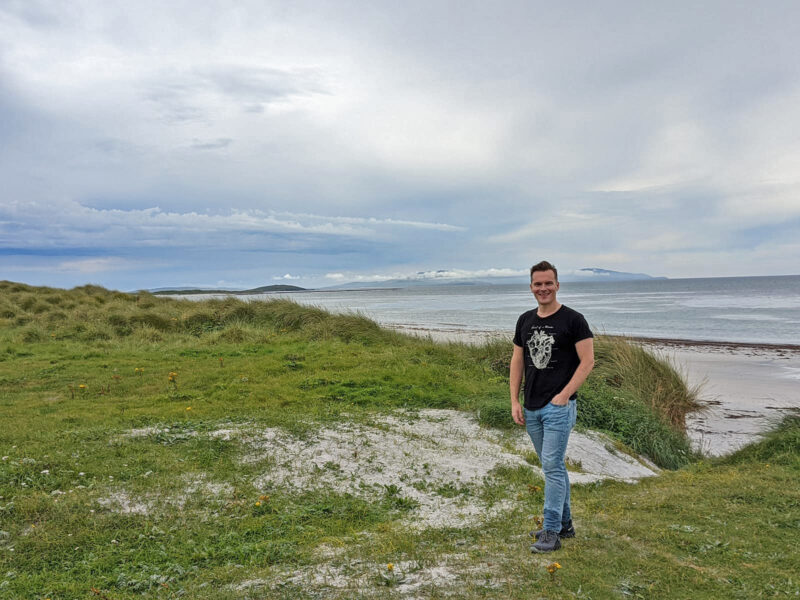 As part of our ongoing series highlighting the work of activists promoting European minority and regional languages in digital spaces, we would like to feature Paul Meighan-Chiblow (@PaulJMeighan) works with the Gàidhlig (Scottish Gaelic language), and is also a PhD Candidate in Educational Studies at McGill University in Canada with a research focus on Indigenous language revitalization and language education policy. Born and raised in Glasgow, Scotland, Paul now lives in Tkaronto (Toronto), Turtle Island (also known as North and Central America).

Find out more about Paul's work in the following e-mail interview conducted by Rising Voices.

My experiences as a Gàidheal (Scottish Gael) growing up in Glaschu (Glasgow) inform my work. I was raised by my mother who is from Dalabrog (Daliburgh), in the north-western island of Uibhist a Deas (South Uist) in na h-Eileanean Siar (Western Isles). I remember hearing Gàidhlig (Scottish Gaelic) all the time around my fluent speaking grandmother. However, Gàidhlig, an endangered Indigenous language in Alba (Scotland), was not available to me in the educational system. Members of my family and older generations recall being beaten for speaking the language. And Gàidhlig, spoken for more than 1500 years in Alba, is still not recognized as an official language in the United Kingdom.

I do not speak my language fluently yet and am currently on a language reclamation journey as an adult learner. My motivation for more equitable education policy and language revitalization has continued to grow since meeting my Anishinaabe Ojibwe husband in Glaschu in 2015. I have learned more from him about the devastating impacts of colonialism on the Indigenous Peoples of Turtle Island. These experiences have led to my current research on the role of technology for endangered Indigenous languages.

PMC: According to the 2011 Scottish Census, 57,375 people (1.1 percent of the Scottish population aged over 3 years old) reported being able to speak Gàidhlig, which is 1,275 fewer than in 2001. The highest percentages of Gaelic speakers are in the na h-Eileanean Siar. For example, Uibhist a Deas includes some of the strongest Gaelic-speaking communities in the world, ranging from 62 to 79 percent of the respective community populations.

Gàidhlig is not an official language of the United Kingdom, despite being spoken there for more than 1,500 years. Gàidhlig is classified as an Indigenous language under the European Charter for Regional or Minority Languages, which the UK Government has ratified, and the Gaelic Language (Scotland) Act 2005 established a language-development body, Bòrd na Gàidhlig.

Outside Scotland, Gàidhlig has been spoken in what is now known as Canada since the 18th century. In the 2016 Canadian census, 3,980 Canadian residents claimed knowledge of Gàidhlig, with a quarter of those resident in Nova Scotia.

In online contexts, Gàidhlig is becoming more prominent. For example, the language learning app Duolingo added the language to the platform in 2019 and recently surpassed 1 million Gàidhlig learners. Sabhal Mor Ostaig, the Scottish National Centre for Gaelic Language and Culture, is taking over further developments of the course. In Scotland, there are free online initiatives and resources to learn the language, such as LearnGaelic or SpeakGaelic, which was established in 2021.

PMC: Gàidhlig, like all endangered and Indigenous languages, needs to be present in digital spaces alongside dominant languages, such as English. There are reasons why languages are endangered and threatened. Primary causes include monolingual and monocultural policies and ideologies.

An example of this in the digital realm is the World Wide Web that was created in 1989 by an American, Tim Berners-Lee. The World Wide Web was envisaged primarily to be monolingual, monocultural, and in English. Even unintentionally, monolingual and monocultural online environments continues to erase Indigenous and minoritized languages.

Since the creation of the World Wide Web, digital and online technologies are becoming more and more widespread. Many people and younger generations play videogames, use cellphones, laptops, and so on to have fun, work, and communicate every day. Indigenous and minoritized speakers and their communities are using technology for language reclamation and revitalization purposes, such as online classes, language learning apps, social media posts, film, and music.

In the past, Gàidhlig has been forcefully excluded from formal or popular domains, such as education or media, by means of violence in classrooms, destructive policies, and discriminatory legislation. It will take time to address the internalized trauma of not being able to speak or use Gàidhlig. Having Gàidhlig more present in the digital landscape could help counteract deficit ideologies about the “value” or “use” of the language, raise its prestige, and engage the younger generation who use technology regularly, such as iPads, cellphone apps, and videogames. More people could use the language in online spaces instead of defaulting to English due to a lack of choice or alternatives.

PMC: There are structural technological issues that prevent Gàidhlig from being fully utilized online. For example, many cellphones do not have the option to have the language settings in Gàidhlig. There are also issues with autocorrect where Gàidhlig is “corrected” to be in English. These issues can become tedious and time consuming and may encourage people to switch to using English online and on their devices.

Other issues include the need for more funding being allocated to local communities to develop and create websites, platforms, and resources in Gàidhlig so they can conduct their work, education, and social lives both online and offline in Gàidhlig. The communities can decide for themselves how digital and online technologies can be fully utilized to best serve the needs of local contexts. If there is more of a need or incentive to use the language online, such as for work or education purposes, the language is more likely to be used.

PMC: I think there are many encouraging initiatives that are already taking place, such as SpeakGaelic, which has a very engaging Twitter account with accessible videos of Gàidhlig conversations, memes, weather reports in the language and so on. It would be great to continue building on these initiatives by making the language even more visible and more engaging to younger learners. I think a great way to do this could be through more music and film.

For example, since I enjoy electronica and synthwave music, I listen to Niteworks, a Gaelic band from the Isle of Skye which fuses Gaelic and folk music with electronica. If younger learners could have access to music and film genres in Gaelic that are in line with their tastes and preferences, it would be easier to acquire the language and encourage their interest and engagement in learning more.

I also think having more funding and initiatives for easily accessible coding classes to develop Gaelic digital and online content would be great. This could help address algorithmic bias in favour of English and also help develop more videogames, websites, and apps in the language. Perhaps in this way younger people could develop their own Gaelic apps, websites, blogs, and content more from their own cellphones and devices!