Awareness and access to resources and tools can enhance the use of Yorùbá online while promoting the digital safety of speakers. 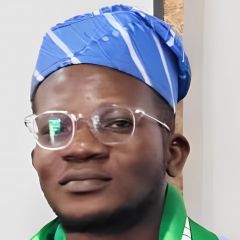 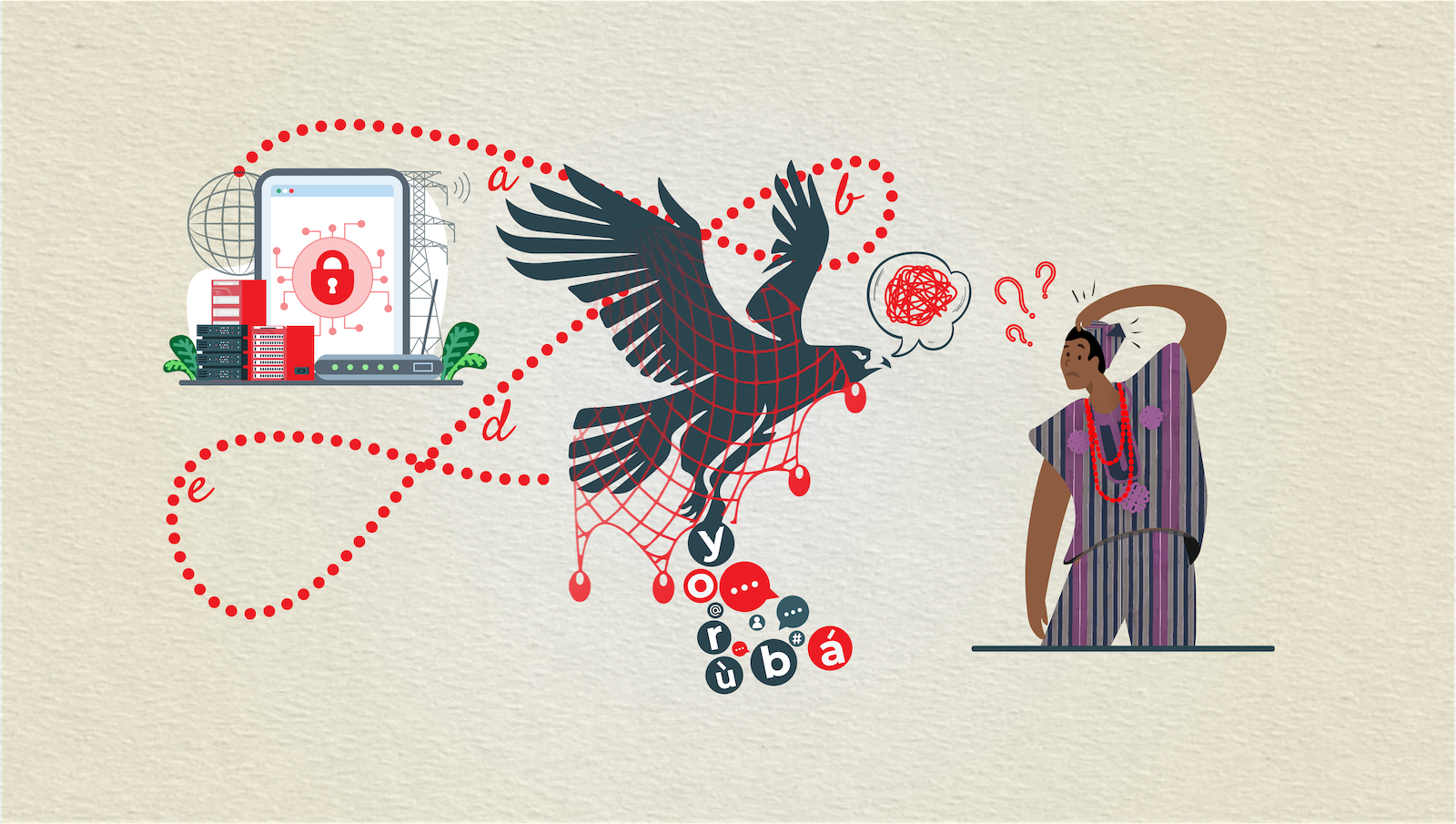 A version of this article is also available in Yorùbá

By María Alvarez Malvido and Adéṣínà Ghani Ayẹni, (Ọmọ Yoòbá), based on his research in collaboration with the Rising Voices participatory research project “Indigenous and minority language community needs for secure technologies.”

Language is used for no other thing than understanding, and there is no language that is greater than the other. It boils down to how the users of the language accept it, because almost all of us in this part of the world have accepted English language, which is why it seems like there are certain things that we cannot do except we use English language. It is not the case, we can use Yorùbá language for these things.

Yorùbá is a language spoken in West Africa, primarily in Southwestern and Central Nigeria. It is spoken by the ethnic Yoruba people. The number of Yoruba speakers is roughly 45 million, plus about 2 million second-language speakers. – Wikipedia

The Yorùbá language is one of the three most spoken languages in Nigeria, with over 40 million speakers all over the world. However, the digital tools available in this language are very limited. How does this affect access to information for Yorùbá speaking internet users? How does it limit access to digital security and privacy protection tools? These are some of the questions that Adéṣínà Ghani Ayẹni, known as Ọmọ Yoòbá, puts in place in the research project “Digital Safety Matters: A Case study of Yorùbá Language Speakers Online.”

Ọmọ Yoòbá is a digital language activist and founder of Yobamoodua Cultural Heritage, an organization that works toward the preservation and revitalization of Yorùbá socio-cultural heritage. For 10 years now, he has been involved in numerous activities that seek to rejuvenate the Yorùbá language. These diverse collective efforts have also moved to the digital space through projects such as those focused in the localization of websites, content creation, the archiving of the oral literature of the Yorùbá people and the creation of language corpus for Artificial Intelligence.

“Non-English-speaking communities across the world are greatly marginalized in the digital space and this divide has resulted in a number of setbacks for the growth of the knowledge society and digital literacy.”

He claims, adding a question: What happens then with the internet users that do not understand English?

To learn more about the implications of an English-centered digital world, Ọmọ Yoòbá interviewed four people who use Yorùbá on digital media, who also have a wide and local audience in their community. These participants are between 21 and 45 years old, three men and one woman. It must be noted that the four participants in the research have access to the internet, as well as access to educational facilities, which is not the case for everyone in Nigeria. All are language activists but hold different paths and experiences: one is a Yorùbá language broadcaster and a teacher, another a Yorùbá spiritual leader (Ifá priest) and custodian of the Yorùbá culture, another a chanter and praise singer of the Yorùbá religion, and the last, a poet.

Their experiences and reflections provide great information about how people on the internet use digital security tools and the actions they take to protect their privacy online. All these questions and learnings are rooted in an inquiry about digital resources in Yorùbá language. Thus, in order to understand the deeper linguistic relevance of this research journey, it is important to dive first into an overview of its context and history.

The Yorùbá community that speaks the Yorùbá language extends from southwest Nigeria to the Republic of Benin, Togo, and some parts of Ghana.  In Ọmọ Yoòbá’s words:

Like that of many ancient traditional people, the Yorùbá culture is oral, and much of the history has been passed down from generation to generation through oral means. The paradigm shift came in the early 19th century through the work of the Christian Missionary Society, whose mission was to evangelize and convert the Yorùbá people to followers of Christ, hence there is need to develop an orthography to be used for this purpose. This development of a standard Yorùbá language came to light in 1884 in the form of a Yorùbá Bible, a translation exercise that birthed a dictionary which has been reviewed, revised and adapted several times by several groups of language enthusiasts.

This writing and historical process of the language lead to a standard Yorùbá orthography based on the Ọ̀yọ́ dialect and it has since been used as such in education and media. More recently, as Ọmọ Yoòbá explains in the study, making Yorùbá compatible with digital tools has required diverse efforts and new innovations from different Yorùbá speakers.  He explains: “Unlike the English language, typing in the Yorùbá language is a marathon race for the community, thereby making the use of the language secondary instead of primary.” These limitations that Ọmọ Yoòbá describes as marathonic imply specific needs and tools such as digital keyboards and multilingual virtual keyboards like SwiftKey, GBoard, Nailangs or KeyMan, which allow for the typing of Yorùbá on the computer using key combinations.

Ọmọ Yoòbá provides an overview of the platforms that some Yorùbá speakers use to create and share in their language, despite the typing limitations and the constraints of a digital place that privileges English as the language by default. They also have diverse paths and occupations — however, their voices, chants and poems have made a forum out of the same social media platforms. All of them put forward their personal reasons for choosing among the diverse tools and platforms on the web. Overall, they claim to be familiar with Facebook and Instagram; some also have a presence on Twitter, YouTube, and TikTok, while some also use WhatsApp to communicate.

To provide examples, one claims to prefer to use YouTube and Instagram because it allows him to post videos that a lot of people would see, while preferring WhatsApp for chatting purposes. Another chooses Facebook, Instagram, Twitter, and WhatsApp because he observes that most of his fans are found there, he can connect with his friends and because of their easy-to-use features. Another uses WhatsApp, Facebook, Twitter, and TikTok, as tools that make posting faster. The fourth participant describes Facebook as her best choice because it has the advantage of connecting with those who she has not seen in a long time, or those who she had lost contact with. Instagram became a choice because of her work as a tailor, to post her creations. TikTok is “just for fun,” whereas Twitter is where she keeps informed about the current happenings and breaking news.

Moreover, some of the participants mention Facebook and WhatsApp as platforms where they can meet with groups that are closely tied to language revitalization processes, such as the Nigeria Poet Association, where discussions on issues related to poetry, art and culture are staged. Another is in groups that center on the promotion of cultural heritage and language, and a member of the Ẹgbẹ́ Akọ́mọlédè àti Àṣà ti Yorùbá, where matters relating to the Yorùbá language and the development of culture are deliberated. Others belong to a group of educational broadcasters, or the graduate group of Yorùbá Master degree of the Lagos State University, the group of journalists in Nigeria, RATTAWU, political forum and the student wing of National Association of Ìṣẹ̀ṣe Youth.

In this digital scenario, what are the strategies that these people use to navigate these platforms in a safe way? According to the research, password management tools are the most common way to feel safe. One participant provided a more detailed strategy on two step verification processes and the use of Virtual Private Networks (VPNs). However, a common feeling and statement from the four participants is that, even though platforms have security settings, they do not feel inherently secure, and  the safety lies ultimately in the user’s hands.

As documented by Ọmọ Yoòbá, one participant explained that, “users should be cautious of private affairs to be put on the internet and how it is put to use, as not all the things done in private life are worthy to be exposed on the internet.” Moreover, “most users are the cause of their predicament, uploading their journeys and locations online.” In the words of the participant:

These platforms have security on one hand, and on the other hand, they are not secure. I think the security and lack of security lies in our (user's) hands. First about what we put online, it is not proper to post everything that we do in our private lives on the internet. Most of us overdo it, we post things that are not meant to be shared online on the internet.

From another participant’s insights:

“The whole insecurity thing boils down to how users put the internet to use, and digital security starts from restricting the type of information that may hunt or hurt the user later on the internet that is shared online.”

As revealed in the study, these four Yorùbá speaking internet users create their own safety strategies, learning from other users, and as consequences of negative experiences such as account hacking or phishing. However, as Ọmọ Yoòbá claims, “the unavailability of digital security resources and digital security education has a great impact on the level of usability of digital tools for security and actions to secure oneself online.” How are self-restricting strategies limiting Yorùbá users’ participation online? Could the access to information on digital security improve their awareness and self-regulation, while enhancing content sharing in their language?

Internet for all, in all our languages

Digital safety is a human right that must be protected at all cost. There are numerous resources on digital safety available in English, including in the context of internet security and privacy. However, access for speakers of Yorùbá language is limited because of the unavailability of these digital education resources in their Indigenous language, which has contributed to a lack of digital safety practices among the members of the community.

Beyond the self-awareness and individual care that Yorùbá speakers are embracing, more articulated and structural action is needed to make the internet a place for diversity. For example, the development of interfaces, platforms, and information in languages like Yorùbá is necessary for users to participate in the decisions and development of tools that respond to the diversity of languages in the world.

As Ọmọ Yoòbá strongly argues, “if the internet is supposed to be for everybody, then it should be in the language of everybody,” which requires an articulation of efforts and a call to action. As they say in Yorùbá, “igi kan ò lè dágbó ṣe,” (a tree does not make a forest), and we all need to come together to achieve this common goal.