Of the hashtag #GîkûyûTwitter, or the love for Gîkûyû language 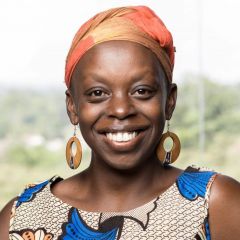 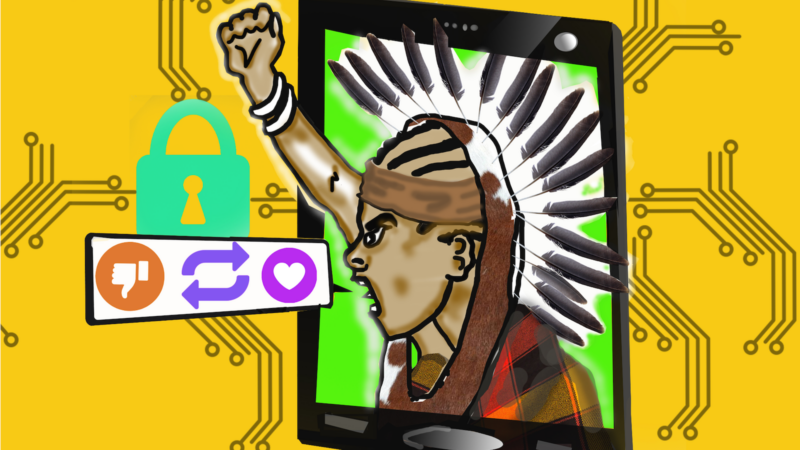 A version of this post is also available in Gîkûyû

By María Alvarez Malvido and Njeri Wangarî, based on Njeri’s work A Case Study: Technology use, Digital Activism and The challenges encountered by Gîkûyû language activists and advocates online.

“Kikuyu or Gikuyu (Gikuyu: Gĩkũyũ) is a Bantu language spoken by the Gĩkũyũ (Agĩkũyũ) of Kenya. Kikuyu is mainly spoken in the area between Nyeri and Nairobi. The Kikuyu people usually identify their lands by the surrounding mountain ranges in Central Kenya which they call Kĩrĩnyaga. The Gikuyu language is intelligibly similar to its surrounding neighbors, the Meru and Embu.” – Wikipedia

Recognition: Not recognized by the State

Language status: 5 (Developing) – The language is in vigorous use, with literature in a standardized form being used by some though this is not yet widespread or sustainable.The language is used in education, work, mass media, and government within major administrative subdivisions of a nation.” – EGIDS scale, Ethnologue

For Njeri Wangarî, to speak and write in Gîkûyû online is a labour of love and a deep sense of responsibility towards her language and culture. It is also a reason to become a writer, poet, podcaster and a digital activist. However, engaging with this love for the language is not an easy task in a digital world of intolerance that borders on bullying, where other languages are privileged. Learning from her own journey and other's experiences, Njeri explores the commitments, challenges, and ideas of activists working towards a digital world that respects and promotes linguistic diversity.

Njeri undertook a research project to observe, understand and interact with the experiences, motivations, challenges and digital lives of five fellow Indigenous Gîkûyû speakers who actively teach, use, entertain in, inform in or engage with others in their mother tongue on social media platforms. Four of the respondents are located on the outskirts of Nairobi, Kenya’s capital city, and one lives in the United States of America. Most share one common digital scenario: Twitter. According to Data Reportal, by January 2022 this social media platform has over 1.35 million social media users in Kenya, and has become a critical role as a source of news and information, as well as an integral tool for expression, protest, and activism on various public political, cultural and spiritual issues.

The Agikuyu (Gîkûyû language speakers) are Kenya's largest ethnic group, and Gîkûyû is the third largest spoken language after English and Kiswahili, which are the official national languages. According to Njeri’s study, Gîkûyû is a Bantu language spoken by 22 percent of Kenya’s population (approximately 7 million people), with three main dialects: Ndia (spoken in Kiambu District), Gichugu (spoken in Muranga District) and Mathira (spoken in Nyeri District).

For Njeri, also known as “The Kenyan Poet,” it is important to acknowledge that the digital world is not the first media channel or tool to be used and adapted by Gîkûyû speakers. According to Njeri,

“The liberalization of the Kenyan airwaves in the late 1980s and early 1990s brought great vibrancy to the media landscape. As the number of TV and radio stations grew, with it came the growth and spread of indigenous language media. This has had a tremendous impact on the growth of the most widely spoken Indigenous languages, including Gîkûyû, not just for those in the country, but also for those in the diaspora.”

Gîkûyû took over the airwaves in Kenya through stations such as Kameme FM, Inooro FM, Gukeny FM and Coro FM, as well as the Kenyan TV broadcasting space through Inooro TV, Kameme TV and Njata TV, among others. In 1992, the first private connections were established in the country, providing internet for the first time. It took until 2009 for the country's digital transformation to begin, after the landing of The East African Marine System (TEAMS). Throughout the last decade, Njeri explains:

“Due to access to electricity, cheap smartphones and internet access among the city-dwelling Agikuyu, the Gîkûyû language has been promoted online through websites, blogs, online forums and social media platforms and lately, through podcasting.”

“Despite the dominance of English and Kiswahili in Kenya’s social media spaces, a group of Gîkûyû language advocates and activists have been using the space either to teach the language or the culture of the Agîkûyû, converse and engage with others, entertain people or form online language communities.”

A labour of love: commitments and challenges

Through a digital survey and an analysis of social media posts, Njeri learned from the experiences, reflections, and inspirations that nourish the words of five digital Gîkûyû activists. One of the main highlights from these findings is that, for most of the participants, their language advocacy online is labour without profit, undertaken out of love and a sense of responsibility to their culture. Most of them do it as individual effort, tied to a collective responsibility of preserving the language and the culture. Because, as Njeri asserts, “by advocating for the language there, we are advocating for the culture,” especially in a digital environment with so much Western culture.

One of the participants states:“It's the language that resonates well with my thoughts, beliefs, and culture. It's what identifies me.” Other languages speakers who resonate with these reflection and advocate individually on Twitter, have strategically created common places in platforms like Twitter through the use of Twitter spaces and hashtags: #Kikuyutwitter / #gikuyutwitter / #Kikuyu / #kikuyudictionary / #shagzchronicles / #kikuyupodcast / #Kikuyulanguage / #kikuyutweets / #Kikuyuculture

Unfortunately, the digital environment in which these efforts take place, is one with many challenges. According to the surveys, the five fellow Gîkûyû speakers feel that digital channels are not safe places by default. Njeri explores how the participants perceive safety and finds that all of them have received threats during their journey as language activists. Even though they sense the risk of threats and hate speech, they demonstrate confidence and empowerment by being able to face those risks.

Also, Njeri says, the political context of these conversations and her study is very relevant. Kenya's general elections happened in August 2022, shortly after this piece was written. In the run up to the last general election in 2017, one of the main concerns observers had was that social media would be used to incite violence if the outcome was not what many people expected. According to researchers, hate speech is a major driver of communal conflict that erupts during election cycles. In 2017, social media platforms became fertile ground where politicians and their allies used hate speech to create hostility among groups, which increased the risk of violence in some parts of the country.

This environment contributes to the intolerance of other languages because of the politicization of language communities. Apart from Gîkûyû being the most spoken language after English and Kiswahili, the Agîkûyû community has dominated Kenya's politics since independence and with it power and access to wealth at the expense of other communities, thereby fostering hatred and distrust towards the Agîkûyû and their language.

One of the participants shares this story of threats tied to linguistic activism:

“Somebody felt that my use of Gîkûyû to express myself is tribal and primitive and went ahead to threaten physical harm.”

The use of local languages on Kenya’s social media, however harmless during an election year, is seen as failing to foster national unity in favour of one’s tribe. In Kenya, politics is more often than not, a rivalry between tribes and clans, not on policies, ideologies or manifestos. And thus, in an election year, when politics take centre stage, they bring with them an entourage of linguistic intolerance.

Examples like this reveal an underlying intolerance of linguistic diversity online. Also, questions or comments to Gîkûyû tweets and content such as “Do you have to use your language?” are not reactions that languages such as English or Kswahili would get. To Njeri, these reactions “always leave a feeling that our language is inferior. It is like we are soiling a special place.”

The key safety strategies that these activists use are keeping their identity hidden and using Virtual Private Networks (VPNs). Also, their public responses and statements create a collective awareness and accompaniment to face these threats. 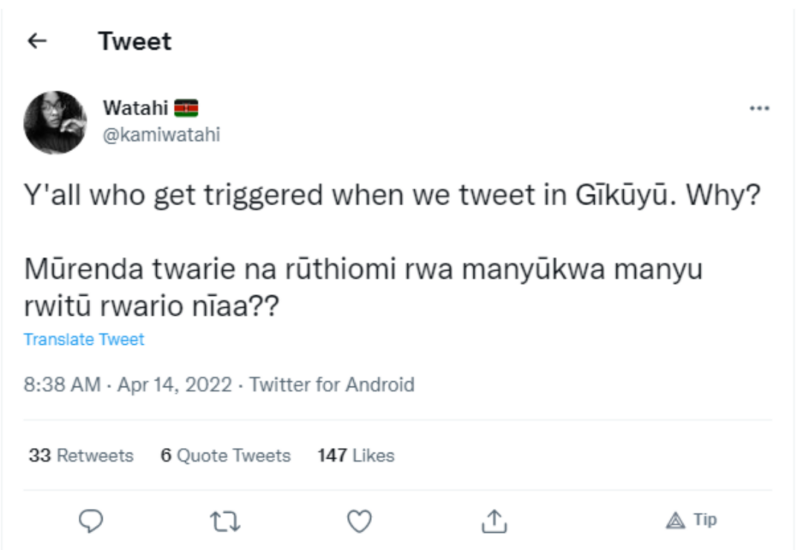 Tweet translation: You want us to speak in your mother tongue then who will speak ours? (screenshot was captured on 18th June, 2022)

Another challenge is the technical limitations: the recognition and representation of the language online. First, access to Gîkûyû specific keyboards is limited because there are no key combinations in standard keyboards to write in this language, and the ones available to download are only designed for mobile phones. Secondly, there is very little translation.

“Translation services on social media platforms do not support Gîkûyû. This has continued to greatly contribute to the lack of tolerance by other online users who do not speak the language as they are not able to translate and therefore feel left out of conversations.”

Towards a safe environment for diversity

“There is a need for more recognition and tolerance not just for Gîkûyû language speakers but also for the use of African languages on social media platforms, especially on Twitter”.

When asked for their proposal on how the internet/social media could be made better and safer for Gîkûyû language activists, one of the respondents said:

‘Through the recognition by internet users that Gîkûyû is a language like any other and no language is superior.’

Njeri also puts forward two specific recommendations and calls to action for these needs to be met:

Making their way out of these limitations and threats online, activists like Njeri and the participants in this study continue their efforts to preserve the language that sustains their culture. Because, as the Kenyan Poet said, “language is the river through which our culture flows, and when the language is lost then the culture is lost.”

Did you know the sweetness of Gĩkũyũ?

The sweetness of Kikuyu

Did you know how sweet Kikuyu is
hear those words
cai, cukari na cabi (tea, sugar, keys)
chukuru, chabi na chibu (school, keys, chief)
whether from Kabete, Kiambu
or from Rware, Nyĩrĩ
it all sounds so good
as it slides down the tongue
and the ears gulp it down

Do you know how sweet it is to speak Kikuyu
that if you want, you can say
sew or stitch
give or bestow
a feud or a fight
head or upstairs
sweet or pleasure