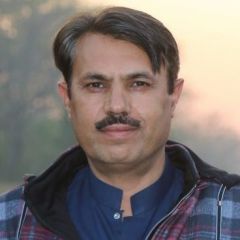 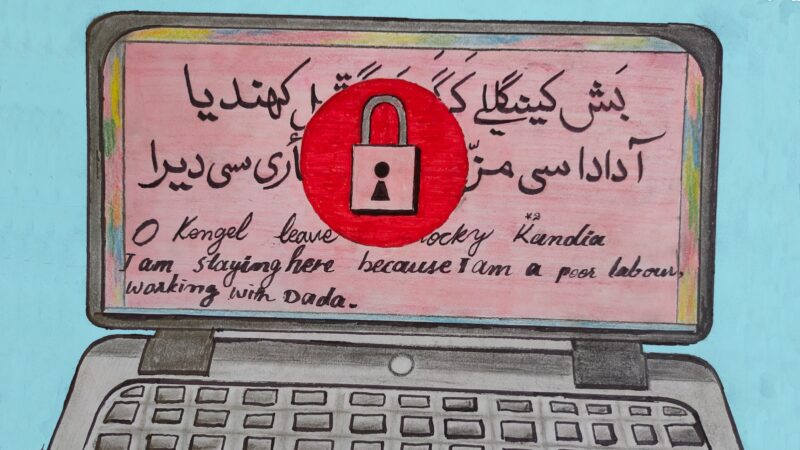 A version of this article is also available in Torwali

Based on the study “Digital Security—the case of Torwali language activists, the team IBT” by Zubair Torwali in collaboration with Rising Voices.

“A Dardic language of the Indo-Aryan family, Torwali is spoken in the Bahrain and Chail areas of District Swat in Northern Pakistan. According to some estimates the Torwali people count themselves more than 120,000 while recent research counts the number of speakers of the Torwali language around 130,000. ‘Possibly half of them live in the heartland, which is located in northern Pakistan, in the Swat River Valley in the Khyber-Pakhtunkhwa province”. — IBT

Recognition: Not recognized on a national or local level

Language status: 6b (Threatened). The language is used for face-to-face communication within all generations, but it is losing users. — EGIDS scale, Ethnologue

The Swat Valley in Pakistan is famous for its natural beauty and well known among many researchers, explorers and writers for its rich history and heritage, as one of the most culturally diverse regions in the country. It is also home to the Idara Baraye Taleem wa Taraqi (IBT), a team of activists and researchers that work to keep the Torwali language alive. Besides long-term strategies like publishing books and designing training, the team nowadays uses social media and digital tools to promote literacy and a cultural identity. These new paths present new challenges such as harassment, surveillance and threats online, revealing new needs for us activists to promote our languages online with safety.

Among other Dardic communities in North Pakistan, Torwali was greatly affected by the Pathan invasion of Swat in the sixteenth century. It was intensely colonized: its lands were stolen and its history and culture demolished. The only remnant of its past today is the Torwali language with oral traditions and folklore to some extent. With approximately 130,000 speakers, it is still present in Swat, along with the dominant language Pashto and other languages such as Gawri, Gujari, Ushojo and Khowar. The language would have disappeared by now if IBT had not organized and passionately worked on the revitalization of the language and culture. The name of the non-governmental nonprofit organization means  “Institute for Education and Development” inUrdu and it has been active in the overall empowerment of the ethnic but marginalized communities of North Pakistan.

Since 2004, rigorous work has been done on the linguistic revitalization of Torwali through a mother-tongue-based program. As language does not exist in isolation from other factors, IBT has undertaken a holistic approach to community empowerment by reviving a sense of pride among the Torwali people about their language, identity and culture through diverse tools and strategies such as literacy, education in Torwali in early grades, advocacy for the cultural and other rights of the people, cultural festivities, rejuvenating Torwali folk poetry and music, and supporting the youth in their studies and in learning, and, more recently, by using digital and social media with great energy and prowess amidst overwhelming challenges.

I am myself a Torwali speaker. From my college days in the late 90s I grew up with a deep sense of marginalization of my community. I saw an identity crisis among the people and felt that they had internalized what their colonizers had ascribed to us. For instance, the people thought they had no history, no ‘language’ — for the dominant ideology in Pakistan regards any unwritten language as merely a ‘dialect’ — or no power at all. We had internalized the identity ascribed to ourselves by the Pathan colonizers over the centuries and, given this domestication and domination, the Torwali people, like other Dardic communities in North Pakistan, lost their collective memory and identity with the demise of two generations. They had also lost the cultural and ethnic affinity with other Dardic communities, because of this historical and cultural isolation and domination.

When I was in college, I felt how my classmates that belonged to the dominant communities looked down upon us and treated us with social, cultural and educational biases and stigmas. This prompted me to react, and I began to form small groups of people my age with an aim to develop education and learning in my community. After the year 2000 I came across a couple of foreign linguists who were conducting research on the languages of North Pakistan. Given my passion and commitment I started working with them as an assistant. Afterwards I, along with my Torwali friends, felt the need to organize so that we could expand and sustain the work.

After diverse collective efforts under various newborn organizations, we finally decided to form Alif Be Te* (Idara Baraye Taleem wa Taraqi) which we abbreviated to IBT on the basis of the Urdu name. Since then, I have been the leader responsible for overall planning, designing and adhering to the core vision of IBT.  I also write in English and Urdu for the national newspapers on issues related to human rights, peace, pluralism, language and education policies.

The establishment and survival of IBT has been crucial because it has organized the individual efforts of activists like me. Also, it has built an experienced and committed team, provided employment for many young and empowered women and men. Being a formal organization has also increased the challenges, as NGOs are often regarded as anti-religion, or agents of foreign power working on some hidden agenda by the state institutions in Pakistan. NGOs have never been in the good books of the state, military and political decision-makers. On their end, any innovative or advocacy work is perceived as threats to the “national cohesion” which, in Pakistan, means homogenization of the entire society by the force of religion and jingoistic patriotism.

Such a mindset has always targeted the NGOs and other civil society groups. The threats to, scrutiny of and surveillance of civil society workers increase when certain political crises or border disputes with the neighboring countries, India and Afghanistan, emerge. Unfortunately, Pakistan has never been lacking political instability and security crises because of the political maneuvering by the military establishment. There are many draconian laws to gag voices and free speech in Pakistan, in addition to abduction, forced disappearances of activists, and controlling media houses. Some of these laws in close relation to the digital tools, as I will explain below.

One of the distinguished approaches to the Torwali language revitalization program is the use of digital and social media to document, preserve and promote the language and culture. Social and digital media are also used to enhance literacy in Torwali among native speakers. For this purpose, an Android keyboard for Torwali was developed by IBT in 2016 with the support of Google. Besides, the team speaks against atrocities, human rights violations, lack of facilities to the marginalized communities and for the protection of environment and forests.

Risk and threats for language activists

Social media like Facebook, YouTube and Twitter have provided an effective platform for connecting like-minded individuals as well as networking communities that lost their ethnic and linguistic shared identities centuries ago. This has greatly increased literacy among the users of social media, and has helped to revitalize endangered Torwali music as well as the Torwali identity among the people. Many ethnic Torwalis who lost their language centuries ago and were/are usually regarded as Pushtun, have now found renewed identity through the work of team IBT and its use of social media for the purpose.

No impact comes without pain. The IBT team has also been exposed to many vulnerabilities while rigorously using social media for their work. We have been bullied, threatened, demonized and maligned by some miscreants in the community as well as by persons from state institutions. We have also faced threats to our data and their devices, and survived plans by certain elements in the community which could have been resulted in mob lynching or death for members of the team IBT.

Though considerably free from the reach of institutions to curb it, social media users are constantly harassed not only by the followers of accepted political and religious ideologies but also by officials of the security forces. In Pakistan, being nonconformist of the commonly held policies is to ask for the wrath of the public as well as of the state institutions. There are multiple challenges to using the internet and social media usage in Pakistan, which include obstacles to access and violation of users’ rights. The Pakistani government still controls the internet environment, carrying out internet shutdowns, blocking websites, and curbing free speech and criticism of government and state institutions with harsh responses such as imprisonment, abduction, blocking, and maligning activists and critics using social media proxy users and influencers.

Resilience is painful, but it's important to be able to adapt the ways we cope with various situations. In response to the increasing vulnerability, the IBT team undertook diverse communication strategies and expanded its outreach in the communities by reaching out to more people in person as well as via social media. For example, we have tried to use Torwali and Urdu on social media on general issues to get their messages understood by the public who easily fall prey to false propaganda by opponents. The team reduced expressing their political views openly, and engaged with educated youths to give priority to local issues that concern everybody and had no political dimensions. Moreover, the team remained more focused on its core work — research and publication — during the COVID-19 pandemic while reaching out to the public virtually. Afterwards the team also increased participation in social gatherings such as funerals, marriages and locally held traditional councils known as “yarak.” On the other hand, IBT has expanded and increased its contacts with national and international intellectuals, activists, researchers, and some contacts within the state institutions were also reactivated.

Considering the strategies mentioned above, it becomes necessary for language activists to keep the various groups within the community on board because the vulnerability in our safety also comes from the nearest community. Communication styles need to be changed as well as the uses of language(s) for it can bring positive changes in the attitudes of the people without tapping any of their religious or political sensibilities. Diversity demands tolerance, and the way one communicates can either destroy or strengthen it.

Despite these measures undertaken by the team members, like reducing presence in social media (specially in political debates), or being more active in the in person community activities,  there is still potential of getting involved in political and religious brawls because of the ever changing political scenarios in Pakistan. I am in no position to censor the voices of these individuals, yet we together can draw lines for us as our work might be harmed by getting involved in such political debates. For this reason, and looking forward to drawing those lines with informed decisions, I suggest the following recommendation:

Team IBT is now well recognized for the work we have been doing on the revitalization of Torwali language. We are committed to continuing these efforts both offline and online, with care for the safety of those of us who work collectively to preserve our memory, culture and identity.

*Alif Be Te ( ا ب ت) are the common first letter of of both the Torwali and Urdu alphabets, and the phrase signifies literacy, learning and knowledge and stands for ادراہ برائے تعلیم و ترقی   in Urdu.