Digital (in)security: The experience of Yucatec Mayan and LGBTTIQ+ activists 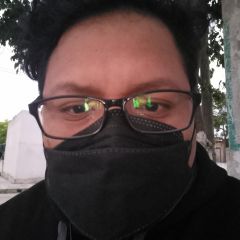 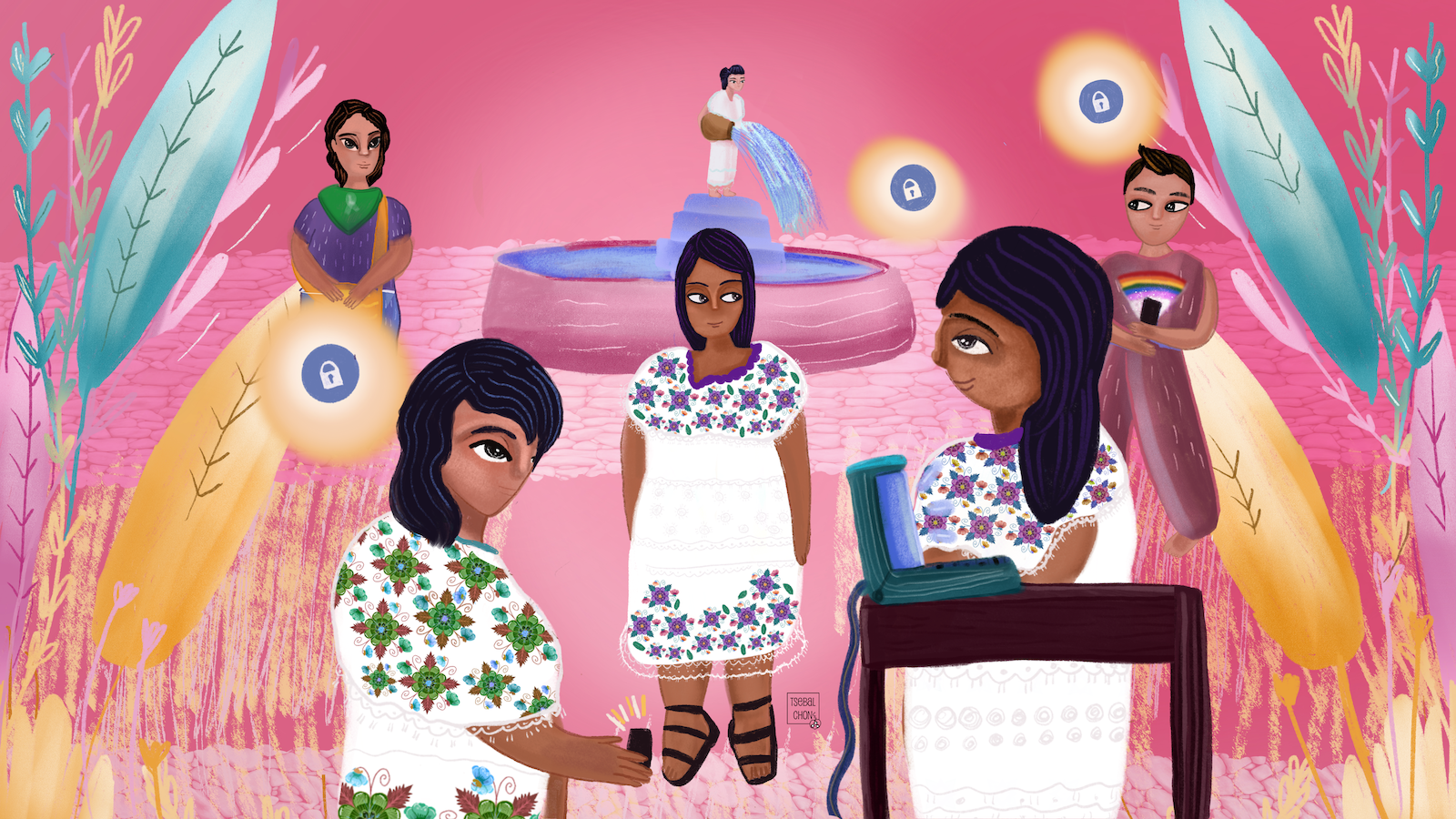 By María Alvarez Malvido and Lorenzo Itzá, based on the case study “How digital (in)security is understood in the gender and sexual diversity activism carried out by Mayans from the eastern Yucatán peninsula” by Lorenzo Itzá

“Yucatec Maya referred to by its speakers simply as Maya or as màaya t’àan is one of the 32 Mayan languages of the Mayan language family. Yucatec Maya is spoken in the Yucatán Peninsula and northern Belize.” — Wikipedia

Recognition: One of the 68 Indigenous Languages recognized as “National Languages”

Language status: 5 (Developing). The language is in vigorous use, with literature in a standardized form being used by some though this is not yet widespread or sustainable. — EGIDS scale, Ethnologue

The discussion about digital violence does not make a lot of reference to how it is experienced by those who live and express linguistic diversity and sexual diversity in the digital world. For the Yucatec Mayan communicator Lorenzo Itzá, it is necessary not only to catalog the types of violence, but also to analyze how it affects people, especially Mayan people who carry out activism on issues of gender and sexual diversity in Yucatán, Mexico.

How do Mayan activists view digital security when sharing sensitive information through Facebook, WhatsApp and email? What is the role of the Yucatec Mayan language in the understanding or implementating digital security measures? These are some of the questions that he explores in the case study “How digital (in)security is understood in the gender and sexual diversity activism carried out by Mayans from the eastern Yucatán peninsula.”

To learn from peoples’ experiences on this issue, Lorenzo interviewed people and held focus group discussions during which five Mayan people, part of a network of activists based in Valladolid, Yucatán, shared their insights. Following these listening sessions and analysis, complemented by his own experience as an activist and collaborator, he proposes a series of recommendations that point towards a digital rights agenda that recognizes diversities in their multiple forms.

Yucatec Maya is the second most spoken Indigenous language in Mexico after Nahuatl. According to government data, it has 795,499 speakers. In Valladolid, as one of the 106 Mayan-speaking municipalities in Yucatán, it is common to hear people communicating in the Yucatec Mayan language in public spaces. It is also a tourist place that has an urban infrastructure, broadband internet services and 3G and 4G networks. The main activity in the area is tourism and the production of handicrafts, and it is a city built on the ruins of the Mayan city Zací.

In this context, the Center for Culture and Human Rights Ts'u'un Naj (Casa Colibrí) and the organization Comité LGBT+ Valladolid Yucatán (Active Youth in the Yucatán Community) work to demand the rights and a life free of violence for women and people of the LGBTQ+ community. The five people included in the study are part of these organizations. They are aged between 18 and 60 years old and use digital communication media to carry out campaigns on social networks. They are all Mayan activists from the Valladolid area, and work for human rights, gender equality and the eradication of gender violence. In terms of the use of the Mayan language, one person is a Mayan speaker from the LGBTQ+ community, two people are going through a process of recovering their language, and two people only speak Spanish.

In Mexico there are some laws that focus on the safety of people in relation to the use of digital tools (such as the Law of Transparency and Access to Public Information and Protection of Personal Rights, the Ingrid Law, and the Olympia Law). However, the participants consider that these laws are far from being implemented or really being supportive of the communities to which they belong. They explain in the study that the fact that these laws do not recognize the specificities of their context violates the rights of the Mayan communities and the LGBTQ+ community.

Moreover, they do not recognize particular vulnerabilities for this group of people. For example, the content in Yucatec Maya shared on social networks can be easily appropriated by another person for profit and without credit being given to the corresponding person. One of the participants commented:

The Mayan worldview has been commercialized, meaning that Indigenous peoples’ beliefs have been used by others for their own economic benefit. This has to do with the intellectual property of Indigenous peoples, and in this case we can see how these cultural rights are practically violated.

Instagram, Facebook and WhatsApp are recognized as the social networks and media that people use to communicate, share content, or share information about their life and activism. Organizations mainly use a Facebook page to share their collective activities and it is their main means of contact. How can the use of these tools and platforms continue along with strategies for the safety of people and collective knowledge in the digital world?

Access to information in Maya language as a right

The relationship of digital security with the Yucatec Mayan language is not only focused on the protection of the content published by the speakers. As the case study reveals, privacy policies violate the rights of the Mayan population by being presented in formats that are incomprehensible and inaccessible for this context. In addition, access to information in the Yucatec Mayan language is a linguistic and cultural right, as one of the participants shared:

If the privacy policies of the platforms we use violate our rights as Mayan people, since these policies are conceptualized in a general way, homogenizing people and without addressing our specificity as a population, I think that in this sense the companies should build policies tailored to each Indigenous people and to the LGBT+ community.

Safety of the LGBTQ+ community

The case study also highlights the lack of public policies on digital security with specific recognition of LGBTQ+ communities and gender violence that mainly affects women. As one of the participants comments,

There is no regulation of these issues since there may be comments on social networks with evident hate, discrimination or violent speech towards the LGBT+ persons part of the Mayan community, and there is no law that specifically protects these communities.

Digital violence against women is also present in multiple circumstances. For example, during election season, the participants observed that violence is more frequently directed at women to undermine their work. In this case, hate speech is directed at gender as opposed to at a straight male political actor.

As stated by one of the participants, “everyone needs to feel safe in the activities they carry out on the social networks or in the virtual world.” Lorenzo says that one of the main effects of insecurity and digital violence is the impact on the mental health of the victims. Digital violence produces sadness, frustration, and feeling powerless, and all these limit the possibilities of acting in this situation. How to devise digital security strategies that take into account the security of communities that are violated? How would an education and training process for Mayan LGBTQ+ people look?

Out of the five people who participated in the study, only two people have been trained on digital security, one of them through the Ministry of Public Security and another through the National Network of Human Rights Defenders. These organizations have also held workshops for the community on gender violence and digital practices on social networks.

The measures taken by the participants to maintain digital security are related to privacy strategies, such as hiding the camera and microphone, using custom settings to limit access to content they share with people they consider trustworthy (such as “Close Friends” on Instagram). These measures related to a person’s profile on social media platforms ensure how their public image is portrayed. However, they do not solve the more complex context faced by the Mayan and LGBTQ+ communities, and they limit the participation and contribution of diverse and relevant content in the digital world from and for the diversity of identities. As one of the participants explains,

Due to a context in which access to information on sensitive issues is difficult, there are certain topics that are taboo to be published on social networks or commented on in public; another example shared by the LGBTQ+ committee relates to topics about mental health, sexual health or events like the pride march. This type of content receives aggressive comments trying to undermine the reputation of the page or the community, including homophobic, transphobic or lesbophobic comments.

Lorenzo concludes that defamation on social networks is a form of digital violence, especially targeting activists, taking into account that people who defend their territory or human rights are very much more visible and exposed to particular forms of discrimination.

For Lorenzo, reducing violence and digital insecurity requires multidisciplinary work towards the creation of audiovisual materials in Yucatec Maya that disseminate information on digital security measures and knowing what to do in the case of a violent incident. Based on this analysis, Lorenzo presents the following recommendations:

If we want to create digital security strategies for all the people who inhabit the digital environment, then the diversity of community, identity and linguistic contexts from which people relate to technologies must be recognized. Likewise, we must learn from the many activists and the knowledge they bring from their personal experiences and together with the communities that defend their voice and their presence in an adverse and violent environment, such as that encountered by the Yucatec Mayan and LGBTQ+ community of Valladolid.