Our third “season” of @AsiaLangsOnline begins on April 7, 2021. This social media campaign features a rotating roster of language activists from across Asia who guest hosts of the @AsiaLangsOnline Twitter account. Coordinated by Rising Voices, the Digital Empowerment Foundation and the O Foundation, this social media campaign follows last year's campaign that took place within the context of the International Year of Indigenous Languages 2019 and will once again provide a space for diverse voices from across the region to tell stories of their experiences with language revitalization and how the internet is playing a role.

Throughout the rest of 2021, different activists will take weekly turns at @AsiaLangsOnline sharing their perspectives on what their language means to them and their communities. These activists are all working to promoting the use of their languages in new domains like the internet, which presents many opportunities and challenges. But there is also an important offline component to their activism related to long-standing histories and contemporary contexts that affect the vitality of Asian languages.

Similar initiatives using Twitter as a collaborative medium are underway in Latin America (@ActLenguas) and in Africa (@DigiAfricanLang), in Canada and the United States (@NativeLangsTech), but this project will focus on languages across Asia.

Response to calls for participation has been extremely positive, as the roster for the first several weeks has already been filled. We are also conducting outreach to invite others to take part. If you have a suggestion for someone that would make a good guest host, please contact us. 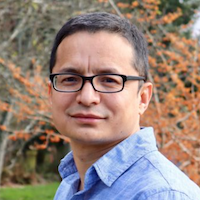 Dr. Subhash Ram Prajapati is a prominent advocate for the Nepalbhasa (Newar) language. He has authored half a dozen books on the Newar language and culture and wrote his Ph.D. dissertation in ethnomusicology on Newar music. After founding and participating in numerous initiatives around cultural preservation, including a news portal and a language learning club on Facebook, Dr. Prajapati is currently leading a Nepalbhasa digitization project. Most recently, the group launched an online dictionary containing close to 30,000 entries to date, making it the largest repository of linguistic data for this language, whether digital or in print.