A Timeline on Azerbaijan's Online Activism 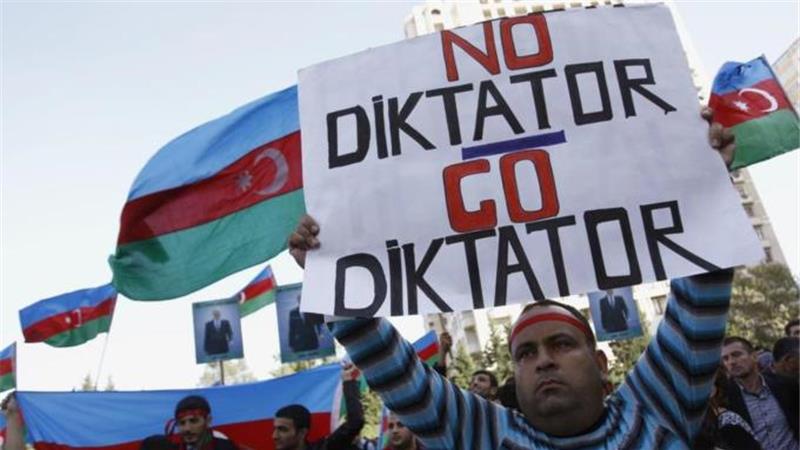 “In Azerbaijan, where freedom of assembly is restricted, being able to organize without co-presence is a tremendous asset to organizations.”
When it comes to independent reporting, organizing and having a platform for independent voices, these days, Internet comes to the rescue in a country like Azerbaijan. Recent protests across several regions in Azerbaijan and people’s overall unawareness of them attests to just how little public television in Azerbaijan actually informs its citizens. In a vox pop prepared by Radio Liberty [Radio Azadliq- one of the few independent outlets which actually covered the protests and reported on them] in the capital Baku one can see the importance of the Internet and online existence versus traditional platforms of information gathering. Most of the respondents speaking to the radio staff said Internet has become their only source of information.

Similarly when it comes to organizing given absence of any other outlets, “online” is the new activist organizing platform. And in Azerbaijan, most of the action takes place on Facebook. But this wasn’t always the case.

I would like to share with you a brief timeline, which is work in progress, of popular campaigns organized online (with many linked to offline activities as well) over the past few years in Azerbaijan.

In 2009, two young men, Emin Milli and Adnan Hajizada made a satirical video. The video was telling the story of a very smart donkey, giving a press conference and talking about how wonderful it is for a donkey to live in a place like Azerbaijan. “Donkeys can do whatever they want here”, said the donkey for instance answering one of the questions from the Azerbaijani journalist. Both men were founders of youth networks. Hajizada was also known for his videologs, often tackling social issues.

Shortly after the video went online and gathered much support, the two men were assaulted at a restaurant in Baku. However the two were later charged with hooliganism even though, all the evidence indicated it was Emin and Adnan who were the actual victims. They were later sentenced to two years and two years and a half respectively on hooliganism charges.

This was the first time, when not only making political satire became dangerous but satire prepared by youth activists tickled authorities patience and so the punishment that followed was needles to say swift.

Their arrest caused much headache for the local authorities as they underestimated the impact it would have on the government’s international image it was so delicately building abroad.

Global Voices covered the detention, trial and imprisonment of “donkey bloggers”, which is how the case became known shortly after.

20-year-old Jabbar, activist from opposition movement Popular Front was arrested and charged with drug possession. His supporters as well as Jabbar himself, said the charges and arrest were political.

His arrest came shortly after his Facebook comments calling for Egypt-style protests in the country.

A Facebook page was set up disseminating information both in Azerbaijani and English.

Few days later Harvard-educated parliamentary candidate Bakhtiyar Hajiyev was arrested as well. While his charges had to do with avoiding military service, in Hajiyev’s case too friends and family, including Hajiyev himself were certain the real reason behind his arrest was his online/offline activism.

Both Jabbar and Bakhtiyar were released from jail ahead of the end of their sentence and are currently free. Jabbar was released on Presidential amnesty in 2012 following wide spread international campaign of Twitter actions, petitions, statements from international organizations and officials. Similarly Bakhtiyar too was released in June 2012, 9 months before the end of his sentence.

Bulistan was the name of a satirical online video channel, launched by a group of Azerbaijani students studying in Turkey. They tackled some of the most pressing social issues in Azerbaijan through their videos. They feature satirical content through fake talk shows interviewing about stereotypes of Azerbaijani people

Their founders were later punished with military conscription, harassment, family members losing jobs. One of the members fled the country and is currently based in Germany. Shortly before fleeing, he was beaten by the police and arrested for his provocative rap songs critical of the ruling family.

Sing for Democracy was launched shortly after Eurovision song contest in 2011. This was the year, when Azerbaijan won the song contest. The initiative was set up to raise awareness on the situation in Azerbaijan. Its founder, lawyer by education Rasul Jafarov was arrested and later sentenced in 2015 and currently remains behind bars.

But before Rasul ended up in jail, the success of Sing for Democracy initiative led him to this new idea and together with alternative artists, singers, song writers, he out together Art For Democracy. Its goal was to make use of all forms of artistic expression to promote human rights and democratic reforms in Azerbaijan.

Looking back at this timeline I am reminded once again how much more freedom there was in Azerbaijan during these years. At least there was some space for implementing new ideas. Expression Online was also Rasul’s project, launched ahead of the International Governance Forum, which is an annual event organized by the United Nations. In 2012, Azerbaijan was the host of this multi stakeholder meeting and Rasul decided to use this opportunity to raise awareness on deteriorating state of freedoms online and offline. He partnered with a number of other local institutions. One of them was Reporters’ Freedom and Safety Institute whose founder was forced into hiding at the Swiss Consulate in Baku for 10 months before he was able to flee the country.

Aside from freedom of expression, to assembly, to speech and so on, Azerbaijan’s other main challenge, which the government tries to cover as much as it can is the deaths of conscripts in the military service outside of combat.

But in 2013, when a body of young conscript was returned to his family covered in bruises, it served as the last straw.

A new movement, calling themselves N!DA (exclamation mark) decided to call of action. They organized the time and place for a protest. The message was very simple and clear: End Conscript Deaths!

This was the first time Azerbaijanis took the main streets of downtown Baku. The government was quick to reach. Water cannons, tear gas, and riot police.

Many were arrested over this rally, including seven of the founding members of the movement. Four of them are still in jail.

The protest calling to end conscript deaths sent many youth activists into pretrial detention. Some were fined. And so, in an attempt to raise money to pay these appalling fines another campaign was launched on Facebook.

This action prompted the government of Azerbaijan to change legislation on fines (raising them greatly).

Another campaign launched via Facebook calling for action to help a young Azerbaijani woman Narmin Rahimli- who at the time was suffering from a medical condition – to raise enough funds to cover her hospital and treatment expenses.

Sadly, she passed away.

Campaign calling for actin to punish the man responsible in the murder of a young woman Aytacn Babayeva in the middle of the street because she refused to date him.

The man was later arrested and tried in court. He was sentenced to 20 years in jail.

Sadly, the murder did not change strong traditional views in Azerbaijani society towards women and to this day harassment against women continues.

15 people died in this fire, which ripped through a 16-story apartment in Baku in May of 2015. This was the first time, when Facebook truly showed its importance as not only a platform for organizing and activists but a place for people to share their pain and grievances. It was also the first time people openly (especially the ones who were never politically active or at least not open about their views) criticized the authorities for poor construction quality and inability to deal with a crisis.

Later on, Facebook was used to organize a mourning day for those who died in fire and called residents of Baku to call in collective matter on the authorities to look into the construction and “beautification” projects.

None of the government officials resigned. And at the end it was really the middle men who ended up going into jail. However, most of the needs stressed on Facebook by Azerbaijani netizens were discussed on the government level and often it almost looked like the officials had little idea of how to deal with the crisis unless it wasn't for all the discussing taking place on Facebook.

An international campaign and a coalition of international organizations working to draw attention to the unprecedented human rights crackdown-taking place in Azerbaijan.

Sport for Rights originally focused on the crackdown-taking place in the run-up to the inaugural European Games, which was held in June 2015 in Baku. Now, the coalition continues to raise human rights concerns in the aftermath of the Games, and the run-up to Azerbaijan's November 2015 parliamentary elections.

Campaign continues to this day pressing on the authorities of Azerbaijan to release Khadija as well as all other political prisoners currently behind bars.

There is Facebook page “FreeKhadija” which keeps followers of the case up to date on all the news related to the case.

In addition, Radio Free Europe/Radio Liberty launched live blog on Khadija's case (and a Tumblr page) as soon as she was arrested, posting immediate news and translations of all the updates.