This moment however was also internally fractured. Various communities and individuals within the ‘queer movement’ had had various differences with the legal trajectory of challenging S.377 (that criminalizes sodomy and other sexual acts). Why the law – and specifically why this law. When trans women were more in danger of violence and harassment because of the Police Act or anti-prostitution laws, when trans men were hardly impacted by this law and their voices were just beginning to be heard in ‘queer movement’ spaces or lesbian or feminist groups, when lesbians are only tangentially effected by the law. It seemed – and there is a global pattern here – that a much larger group of people had been pulled under the umbrella of queer mostly to service the objectives of ensuring that the relatively elite gay male existence is problem free. This is perhaps even an unfair reading of their defensible reasons for wanting S.377 off the books, but the categorical reality is that filing a case that dealt myopically only with S.377 is not inclusive of the diversity of trans, intersex, lesbian lives. The Supreme Court decision eventually stated that this is not a matter for the court to decide and it is a question for the Indian parliament. In January 2016 an opportunistic politician attempted to introduce a private bill to decriminalize S.377 of the Indian Penal Code, only to be soundly defeated and the bill did not even get tabled for a vote.

This is the context in and through which the Bangalore Queer Film Festival has taken place. Our belief has always been that films tell more complicated stories and that creative performances by those close to us suddenly reveal the beauty of their inner lives. No matter how low the resolution, how macabre the vision of a slasher film from a small town in Maharashtra, or how explicit a film about sexual utopias from a student in a college in Kerala, we welcome almost all Indian submissions. The one line that has been drawn has been a short film when a gay man makes a pass on a straight man and is then attacked and slashed by him. With blood soaked clothes and guts hanging out, he drags himself to a mirror and with toothpaste (not blood) he writes TABOO on the mirror. The film intended to be homophobic but it was unintentionally hilarious and campy ~ only a queer and crazy audience would love it.

Our intentions have been to be inclusive to a fault. It began primarily as finding a space especially for lesbian films and for women filmmakers in a context where activism has been dominated by the gay male agenda. But we too have learnt many lessons while doing the festival. That we don't always love films about lesbian lives and love stories that take place in European and American contexts especially if these are completely separated from the stories of minorities, people of colour or immigrants. That while there have been a spate of films about trans women from the global South, they have often been subjects of such films and rarely ever able to fully determine their own representation. That trans men have not been fully seen or heard in most spaces and their struggle with didactic forms of feminism must be heard. And so on..  We learnt not to over value technical production and quality and to look for the heart of the film and the audience. Every year as the technical co-ordinator of the festival I have sat in a dark booth to change the films and have learnt to detect by the sighs and shuffles of the audience, what is working and what is not. What is making them uncomfortable but is also opening up new ways of thinking and new languages of the body. In the darkened space between the screen and the body, minute shifts in ways of thinking and being can happen that lectures and pamphlets cannot achieve.

Our website (this year it is a sham but the earlier versions were much better) is one of our main ways of both reaching out to filmmakers and contributors. We have started using google forms to register our delegates and so keep track of how many people participate (approximately 1000 people registered and our highest footfall or attendance at the venue was probably 500-600 at the peak timings). We use social media to inform people about the festival but since it is now an annual event, the community is often aware of the festival through word-of-mouth as well. We get listed in magazines and newspapers and this draws in new participation.

Our biggest conundrum however is always how to raise money for the festival since it has no fixed funding. In the last 2-3 years we have shifted especially to crowdfunding with mixed results. The first year we were delighted with the amount of money we collected since it already surpassed our meagre expectations. More over we had money to spend before the festival, since usually we collected money at the festival and so often had various bills to pay after. The second year we got a little duped by the website that was collecting funds on our behalf and they likely took a larger cut and did not keep any track of those donating. This will be our third year with crowdfunding and the festival is going to take place in little over than a month. One of our unusual funding practices is to participate in a gambling party that takes place for Chinese New Year and once the winners are declared, to cajole the winners into parting with some of their cash.

One of the oft repeated discussions within the group is regarding corporate funding (but gambling is Okay!?). We have often been approached by corporations but have only taken some support from them for advertisements in the brochure.  Some companies have gay employee associations and it is these that have often helped us secure funding either through their own individual contributions or contacts. Most of us work on a volunteer basis and we are beginning to realise that as a long term strategy this may not work. Our impossible dream is ofcourse to become an institution like the London Gay Film Festival or Frameline.

We also have to be wary of the policies of the new government. In India only film festivals with exemption from the Central Ministry of Information and Broadcasting can screen films that have not been passed by the censor board. While in the preceding years we proceeded without caring much for this regulation, we have for the last 3 years applied for exemption and been granted it without much trouble, in spite of the change in the government last year or even the negative decision of the Supreme Court. This could be because departments of the government are not necessarily in touch with each other, but it is also because of a certain amount of packaging by us of the festival. Issues to do with communalism, Kashmir, caste are the reasons why the State intervenes in public screenings – some of us have in other forums and groups organized such screenings as well. Here it is by on paper abiding with the required regulations of the State that we manage to conduct a festival. Our venues also have been in spaces that are the cultural institutions of France and Germany in India – these are historically about colonialism and Western patronage but in the current context are the few spaces where screenings and performances that are sexual and explicit can take place.

Our major challenges remain that we have to reach out to other audiences and other spaces and this perhaps is possible through more standalone and separate screenings of films in other venues. We have often realized that the best way to invite a group that may find a space intimidating because of perceived class and caste barriers, is to show their film. To invite them on stage and to allow hierarchies of what is said and unsaid to be inverted. An image in a film is just a composite of light and shade and can be made to tell a million different stories. 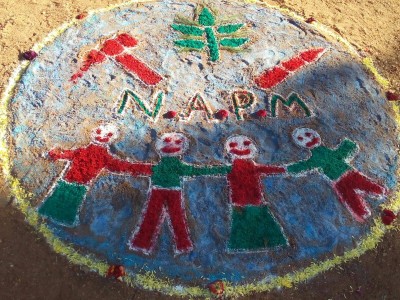 Against Beef Ban in India