What About Post-Digital Advocacy?

“The digital revolution is over.“
Nicholas Negroponte

Beyond the vertigo of like-rates on social media and the zombie-like zapping of never-ending timelines and volatile hashtags, how can people actually take today’s tools in their own hands to create meaningful – and lasting – change for better?

A few months ago I had a conversation with the visionary co-founder and former director of MIT Center for Future Civic Media, Chris Csikszentmihályi, about recent advances in the commons-based models of peer production and how new forms of cooperation between code designers, researchers and activists are bringing impact and evidence to support advocacy around the world.

Chris was coming from the Portuguese island of Madeira, half way in the Atlantic between Africa and Europe, where he has been appointed European Research Area Chairman of Human-Computer Interaction and Design Innovation at Madeira Interactive Technologies Institute (M-ITI). In Porto, he was going to be the opening keynote speaker of Futureplaces, an annual digital media festival (and an ongoing “medialab for citizenship”) which is organized by the University of Porto in partnership with the University of Texas in Austin since 2008.

It was late October but still warm and sunny, so we sat in the garden of the venue very near a giant scarecrow fully covered in magnetic tape.

“That’s Antifluffy,” I said, “the mascot of futureplaces,” explaining the omen of post-digital emancipation.

Chris smiled backed in sympathy. He would soon be telling me a story of reuse of another obsolete data storage peripheral in a different kind of natural environment – or how spectrometers made of broken CDs have helped uncover the BP oil spill in the Gulf of Mexico.

Wait, but how come broken CD pieces can help smash the oil and gas industry? In the podcast below you will hear about it as well as other fragments of a long conversation that may well provoke our collective imagination as activists, advocates and researchers. For instance, that balloons, kites and disposable cameras have been used to map olive trees in Palestine, bringing evidence of human settlement in a territory where it is often a contested question. 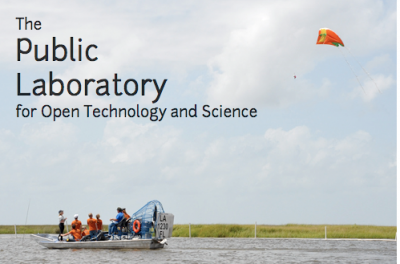 “By democratizing inexpensive and accessible “Do-It-Yourself” techniques, Public Laboratory creates a collaborative network of practitioners who actively re-imagine the human relationship with the environment.”

Throughout the interview, going from community radio to Grassroots Mapping, Chris points out different examples of the amazing work of the Public Laboratory of Technology and Science, a non-profit that “develops and applies open-source tools to environmental exploration and investigation”.

“They’re creating both a social movement around communities gathering scientific information about themselves – about pollution, development, resources – but they’re also producing these products that help the community,” says Chris about Public Lab's active community of code designers and developers of DIY tools and techniques that empowers people to participate in decisions being made about their communities, around the world.

“Overall we’re in a period where media is changing from the broadcast model of the twentieth century to a networked topology of a lot more kind of elements that are interconnected and can produce or show information to people.” This shift has deeply changed the way we glocally communicate, organize, produce and consume knowledge and goods, enabling bottom-up peer-production of all kinds, including, of course, information and advocacy.

What’s interesting about it is not just happening through new technologies but it also has the possibility to happen through older but still vibrant technologies. 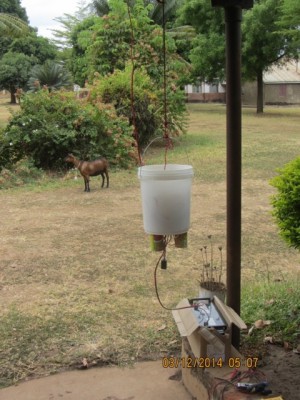 So we start with the airwaves and the community radio movement, to understand a medium that was born in the era of broadcast and “through a process of both commercialism and also government regulation, became very much not oriented around communities.” Still, in many places, radio is where most people get the bulk of their information from, as refers the Rootio sociotechnical sound system, a project he created with Jude Mukundane in Uganda – how can it benefit today from the advances in peer networks and production that the Internet has enabled?

Chris believes there is a very interesting possibility for radio in the future, as licenses for non-commercial stations are being opened in different countries around the world.

…so there were Native American groups that had never had a station, you have community groups that were interested in minimum wage law, and they would create a station. You have these much more diverse opportunities. And you can say that a website is not nearly as important as a Figaro or Spiegel or some big newspaper but that’s kind of missing the point. It’s the fact that there all these websites, and that one website might have very important information at a moment that lots of people go to and so you’ve essentially created a network of information. That might be a very interesting possibility for radio in the future.

The interview was recorded in Porto, Portugal, during futureplaces 2015.