Our Experience Advocating for Human Rights in Cambodia 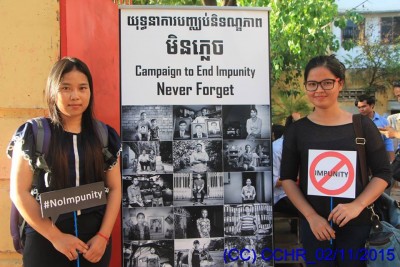 The organization Cambodian Center for Human Rights (CCHR), of which I am the Executive Director, is actively involved with a range of advocacy campaigns and continues to promote the importance of sustained and targeted advocacy throughout its operations. Advocacy entails sustained efforts to document and raise awareness of a particular issue in order to influence the authorities by building public pressure as to the urgency and importance of the matter.

Such campaigns have been conducted in response to a wide range of human rights issues in Cambodia, including the promotion of positive views towards same-sex marriage and the problem of impunity for perpetrators of serious crimes. CCHR recognizes the value of advocacy to effective and sustainable campaigning and therefore seeks to build capacity among ordinary Cambodians in order to empower them to lead campaigns themselves to promote respect for human rights in Cambodia.

The CCHR promoted a Campaign to End Impunity in Cambodia in November 2015 to coincide with the United Nation’s International Day to End Impunity for Crimes against Journalists. This issue is particularly serious in Cambodia, since rampant impunity allows major human rights violations to occur on a regular basis without the perpetrators being punished. The failure to hold the perpetrators to account for their actions threatens the right to access to justice and also promotes fear and discontent amongst the victims and their families.

As part of this campaign, the CCHR displayed a photo exhibition in Phnom Penh, profiling 10 victims of impunity in Cambodia, and produced and screened a video entitled “Never Forget”, in order to raise awareness of the extent of the problem of impunity. The launch of the exhibition was also marked by a panel discussion with leading campaigners and victims’ families, which aimed to provide them with a platform to call upon the Royal Government of Cambodia (the “RGC”) to take action to bring the perpetrators to justice. CCHR also utilized social media and the hashtag #NeverForget and #NoImpunity in order to effectively convey this core objective and to generate as much attention as possible.

In 2015, the Sexual Orientation and Gender Identity (“SOGI”) Project conducted focused advocacy to push for the introduction of anti-discrimination legislation, transgender rights and to support the legalization of same-sex marriage for LGBTIQ people in Cambodia. Following the campaign, the CCHR was delighted to receive positive responses from the RGC regarding the need for greater social inclusion of LGBT people and also the RGC’s possible willingness to permit same-sex marriage in Cambodia. These developments are very encouraging and once again demonstrate the great potential of advocacy as a means of securing progressive change and greater respect for human rights.

Empowering individuals to complete effective advocacy themselves through training programs is also strongly supported by the CCHR. In July 2015, the SOGI Project held an advocacy training session on Using Social Media to Advocate for LGBT Issues. Parts of the training session were also recorded as an audio podcast, which is available on the CCHR’s website in order to maximize the number of beneficiaries of the training. CCHR’s Women Human Rights Defenders (“WHRDs”) Project also organized a Training Session on Advocacy and Mental Health for WHRDs in November 2015. This was held in collaboration with UN Women and the Transcultural Psychosocial Organization Cambodia (TPO) with the objective of educating WHRDs from across Cambodia with regards to non-violent advocacy, advocacy through social media, security techniques, first aid and mental health. 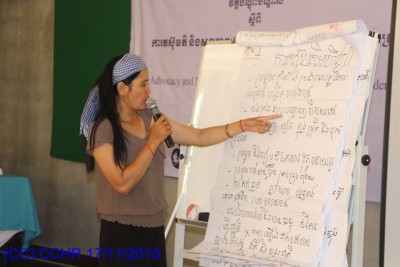 Presentation by a participants during the Training Session on Advocacy and Mental Health for WHRDs.

The Land Reform Project (“LRP”), in cooperation with the Cambodia Indigenous Youth Association (CIYA) and Equitable Cambodia (EC), has also conducted a series of training sessions on Land Law and Advocacy Techniques with four communities, based in Battambang, Mondulkiri, Kampong Speu and Koh Kong, which have been involved in land rights disputes in 2015. The capacity building of WHRDs and other activists from across Cambodia is extremely important in order to empower people to engage in sustained and determined advocacy to promote respect for human rights. 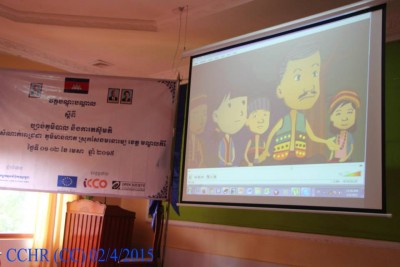 Video showing on advocacy of the indigenous people during the training on Land Law and Advocacy Techniques.

CCHR has seen some very encouraging results to its advocacy campaigns and its efforts to enable human rights defenders to conduct advocacy more effectively themselves, and intends to continue to advocate for greater respect for human rights in the future.