Kichwa.net or Kichwasun (“we continue to speak Kichwa”) is a collective project from Otavalo, Ecuador. Kichwasun includes projects aiming to revitalize and make Kichwa language visible in the region through collective activities using digital media (such as websites, YouTube, Facebook) and workshops. In short, it is a project for teaching Kichwa online and offline.

URLs related to the project:

The kichwa.net project has a webpage with a series of Kichwa teaching lessons. They are titled as: Kichwa vocabulary, Kichwa course, Grammar, Neologisms, Dialogues and Phrases. These lessons are included primarily in a blog with links to a channel on YouTube, with PowerPoint presentations, online dictionaries, and PDFs.

Kichwa.net was launched in 2013, based on the work of the Ecuadorian group Kichwashun which included Imbaya Cachiguango (communicator), Sacha Rosero and Eddy Maldonado (computer scientists), Carmen Chuquin (linguist), and Yuric Maiya Cachiguango (sound and photography). Currently, the publications related to this initiative are distributed through the official project portal (http://kichwa.net/) and through social networks such as Facebook, Twitter, YouTube and WhatsApp.

The Kichwa.net team considers that the project aims to promote the processes of Intercultural Bilingual Education, because there is a lack of support materials in this regard. There are people who write poetry, publish and have copyrights, but these products are not accessible to everyone.

Therefore, the contents and materials that are created by this group support the students and adapt to their shared experiences. In this way, on the one hand, support material is created, and on the other hand, the same people are encouraged to create. Teachers are interested in the project, but, in order for them to be able to carry out more activities of this kind, they need training. So far, the students who use Kichwa are the ones who repeat what they have learned from the articles or publications.

Until March 2016, more than 500 articles have been written in Kichwa, including many bilingual invitations, tips, everyday phrases, accompanied by photographs. Andean or fusion songs are broadcast on YouTube, and rap or ballad songs in Kichwa are also preferred by the public.

Offline, Kichwa.net has been collaborating with other projects to improve the ways of teaching the Kichwa language. Imbaya Cachiguango says that:

So far, the generation of teachers who established the teaching methods is more experienced in the structural, linguistic aspects of the language. Kichwa also has other more profound aspects, meaning that many things can be expressed with a word … Still, there are people who question the usefulness of Kichwa, asking how will Kichwa serve them.

Faced with this situation, the group holds meetings to find solutions, and considered that language has a philosophical depth and that they have to make efforts to convince people so that they would want to use the language.

One of the goals of this group is to get the Law of Languages approved, which seeks to preserve Ecuador's 14 languages, in addition to teachers and students using the language on social networks. These initiatives are planned to be applied in other Ecuadorian municipalities. 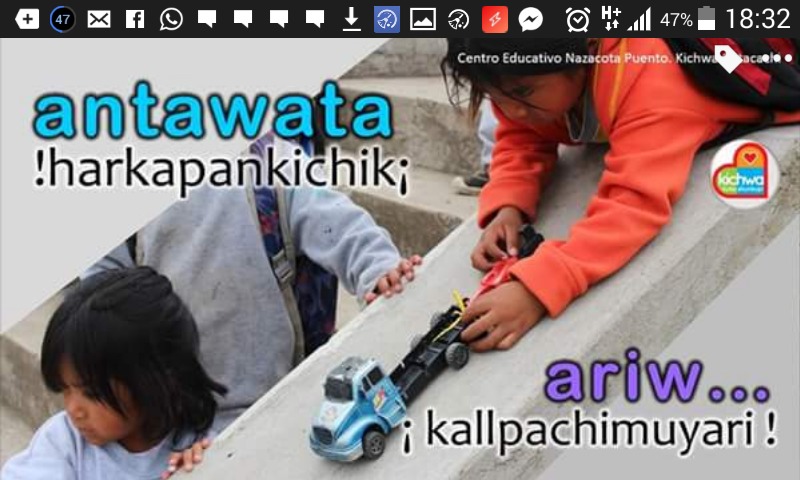 The Kichwa.net team does not yet have an office and computer equipment to work on this project, every item belongs to individual collaborators. The group is in the process of acquiring a legal status for its operation. Collaboration within the team is important, and the team members support each other when they need guidance. The basic technological infrastructure with which they have been working has been sufficient so far, however, there is a continued need to manage the resources for this project in view of its sustained growth. For example, the team aims to create a Kichwa oral archive, based on audio and video recordings, contained in an online repository that can have multiple purposes of use and application. Having this objectives, the team considers that it is important to have access to more sophisticated equipment for recording, organizing and storing the materials created in this project.

Other challenges for the project are related to the inclusion of more language dialects, since, at present, not all the Kichwa dialects are included. This is the reason why the project is currently developed only in the Otavalo region. Thus, many activities are viewed as experiments that ideally will have to be replicated in regions with other dialects. The growth of the project is expected to boost the registering of other language dialects, in addition to encouraging promulgation through other outlets, such as community or online radio. To meet this goal, the team members are in contact with representatives of the different Kichwa speaking regions.

We need to reposition the language, for us and in society, this is the only way for the language to continue to exist. Some asked us which is the dominant language, Spanish or the native language? We are misled to believe that we are balanced bilinguals, and I myself did not realize the diglossia. Others often say that we want to impose the language. We tell them is not about imposing, but about restoring the language.

People in the community are still questioning “why do I have to learn Kichwa, if I can manage everything in Spanish?” Given these circumstances, it is not enough or effective to strengthen the language having only identity as the main argument. The team focuses on this type of questioning and issues, before taking direct action to experiment with the use of Kichwa. This strategy provides insights into how it is possible for the language to be appreciated by people in contexts where languages should be revitalized and preserved.