The Kimeltuwe initiative is an online space for teaching and learning the Mapuche language (also called “Mapudungun” or “Mapuzungun”), which started out as the Twitter account @frasemapuzungun (Mapuzungun phrases), created by Mapuche primary education teacher Victor Carilaf in collaboration with the Chilean illustrator and Mapudungun language student Fiestóforo.

The Kimeltuwe project is a nonprofit initiative that formally launched in April 2015, but first began with previous collaborations between its authors in October 2014. These days, publications related to the initiative are officially distributed through three social media accounts: One on Facebook, one on Twitter, and a Youtube channel.

Reactions to the work of Kimeltuwe stem from both native Mapuzungun speakers and non-native learners, as well as those who are teaching it. It has been a valued resource for educators as complementary material in the classroom. As such, Kimeltuwe has become a source of consultation and feedback for language students in Chile and around the world. These mainly consist of people who live in urban areas. In rural areas, it is teachers who have shown the most interest, by printing materials or projecting them in the classroom and displaying their appreciation by means of photos sent to social media networks.

Kimultuwe's material content is diverse and includes songs, poems, and phrases. For example, lyrics of songs by John Lennon and Violeta Parra, poems by Pablo Neruda, and passages from The Little Prince have all been translated into Mapuzungun. This kind of content was generated for distribution due to wide recognition, regardless of whether or not they are of Mapuche origin, as they help demonstrate the versatility of Mapuzungun. This practice is also a good way to publish material on networks without having to constantly generate original material (created by an ex-professor from language research work), as new works are being reserved for publication in the near future. As part of this strategy, they have also decided on occasion to publish songs or paintings by local artists.

The diffusion of this content throughout social media has helped propel the project's visibility in conventional media. For instance, a national newspaper published an article in June 2015 about the Kimeltuwe team's work on the internet entitled “Professor Mapuche puts a smile on the face of the Kultrun.” Other local and national newspapers have also reported about the initiative. In addition to positive media exposure, social network users have also shown their appreciation of promoting Mapuzungun-related content. User feedback is frequently found in online spaces that point to the impact of these publications:

‘Yo me he acordado de una palabra’.

‘I know that nowadays my daughter says pun may, which means good night, and she said it thanks to you because my daughter learned it from what you have published here.’

‘I have remembered a word.’

‘I didn't know any and then I learned this.’ 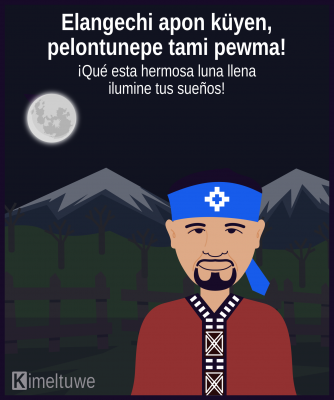 “I hope this beautiful full moon shines on your dreams!”

Some of the more important challenges Kimeltuwe faces involve finding diversity in content. Observers note that some subjects are more popular than others, like publications that focus on aspects of daily life (how to wish a good day to someone, for example, or good night, has had the highest success among social media, in comparison with more grammar-based lessons). Following this sense, an introduction of content promoting the wisdom and knowledge of Mapuche has also been proposed, as it has been observed that they share equal popularity. These are cultural elements not shared by other Chileans (or Argentines); for example, food, baby names, furniture, childrearing techniques and musical instruments, among others. Recognizing that these kinds of content have gained a larger acceptance, the Kimeltuwe team mixes them with other content about the Mapuche language in a more grammatical manner.

Bringing Kimeltuwe-produced work to rural environments is an important challenge for populations where Mapuzungun “is lived every day,” as a strategy that emphasizes the necessity of continuing to transmit the language to new generations.

Although goals have not been established in terms of audience numbers that the Kimultuwe project wants to reach, its creators want their materials serve the largest number of users and have a better positioning in schools as well as social networks. That is why one of its short term goals is to secure funding for the printed publication of books, posters and sheets that can be distributed in schools.

It is hoped that the project will encourage connections between various regions where there are communities where diverse varieties of Mapuzungun are spoken, which Carilaf acknowledges:

The internet gives me that option because I can meet people that live on the coast, by the sea, and say: ‘Look, they're speaking it like this here,’ and meet people in Argentina and go, ‘Here they speak it like that.’ I do not need to go to those places because I have a place where I can obtain that information.

Finally, the Kimeltuwe team recognizes that the “activist” character of the project is to be a tool that contributes to the global empowerment of language and culture. Carilaf says:

That's why I said [seeing what is shared on social media]: This can be made into Mapuzungun too, why not? If people like it, why don't we “Mapuchize” it? Our idea is, [to] ‘Mapuchize’ social networks, be it Twitter, Facebook, or Youtube. Youtube may have more material. But that is not the case with Twitter, for example, because at least here in Chile people who have Twitter are, as we say, on another level media-wise. But we have also reached these people in some way. We have created awareness of the language, which still exists, [even] though many people say it won't for much longer. People who have never had relationships with us [the Mapuches] say so. But then there is also that, the concept of ‘Mapuchizing,” if we can upload an image and it's retweeted, it can spread, which is brilliant for us. That is the bottom line of the idea.