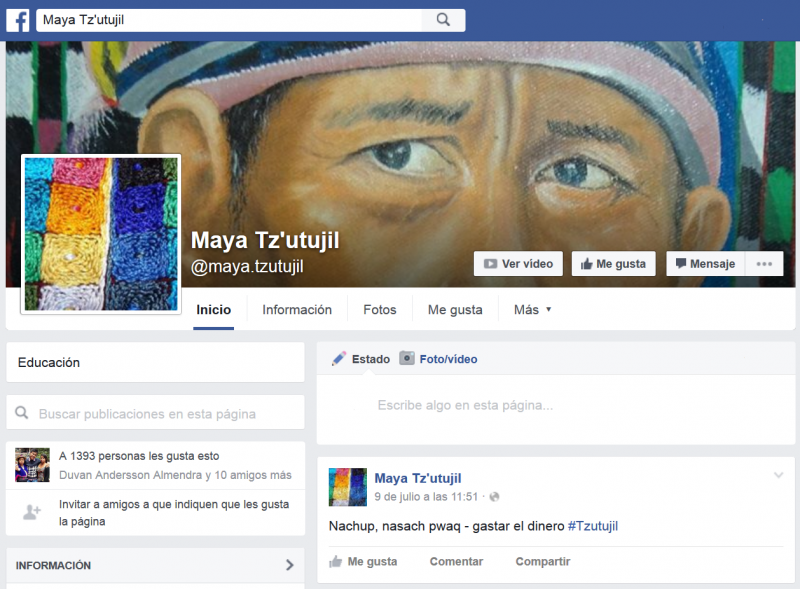 The Maya Tz’utujil initiative is a space on Facebook, Twitter and WordPress to teach, learn, and broadcast the Tz’utujil language, which primarily covers the geographic national area of Guatemala, and includes multiple collaborative partners who have become fully linked to the digital initiative. The project was created and continues to be led by the elementary school teacher, Israel Quic.

The project endeavors to draw out the “Maya Tz’utujil” language for native speakers and, also, to contribute to a learning base for non-Mayan speakers. Content is published in Spanish and in Maya Tz’utujil, and the majority of publications are based on phrases rather than just words. Another aim is to share the philosophy of Mayan thought in the midst of Western thinking and the Spanish language, both of which have taken greater hold over people's daily lives.

The social networking spaces, such as the private Facebook group, are spaces where Mayan speakers read, discuss, and write in their own language. The content is cultural, humorous, and social in nature, although the pieces that show a particularly “funny” side use a sense of humor that is accepted by both the public and the project team. The Facebook page began in 2011, the group of Mayan speakers was launched in 2012, and the blog was created in 2015.

The project has succeeded in shaping and in being seen by the same people that were the intended audience since the start, due to it having caught the attention and support of the youth in the region, although they still haven't obtained positive results with the indigenous leaders and representatives from the region, thus making it necessary to bring the initiative's results to more people in community spaces.

Among social media users who are native Mayan speakers, the project's online existence has gained recognition and it has become a common reference point to resolve doubts regarding correct language usage. The trust that has been created around the project administrators has been sizeable, given how the users list their members as the subject-matter experts in the language.

The Facebook Group of Mayan speakers has been the space with more interaction between users and administrators, while on the Facebook Page interaction has been minimal. The posts that gain more popularity are phrases and expressions that tend to joke. The project's tasks have been solely written, and the themes addressed have been linked to content the administrators deem useful.

Results from the development of the digital initiative include: on Facebook there are 532 Mayan-speaking users and the page has gathered 1,300 connections, of which 50% are Guatemalan and another 50% are foreigners from the United States and Europe. In this way, the diversity of people signed up to the project as followers, users, or the general public, is one of the more remarkable achievements of the initiative.

The availability of technological infrastructure and connectivity pose the largest challenges the work team has faced in advancing the work they carry out collectively. Their equipment stack is comprised of a camera, some tablets, and an internet connection in the community library. The equipment is shared and anyone who is connected to the project can use it. The items were acquired as part of a grant awarded in the Microfunds in support of citizen media initiatives promoted by Rising Voices.

Conversely, while many team members have been able to gain experience handling equipment and digital communication platforms, some people have not been able to take full advantage of the infrastructure, and frequently are not able to put it to good use, as likely caused by the lack of connectivity. In this sense, the current equipment does not turn out to be enough to meet project objectives and combined with major constraints linked to internet access, given the high cost of connectivity in Guatemala, users’ participation is restricted to only those moments when reliable internet access is possible.

Another priority is that the work team establish mechanisms for software applications and updates considered necessary to enhance the publications. The types of programs most required relate to image manipulation and video creation. 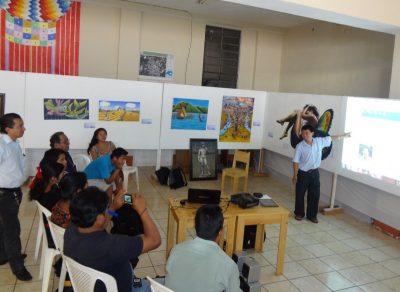 Israel Quic presenting the project in the community library. Photo by Quic.

As far as goals, the team works on short- and medium-term goals, of which one highlight has been accomplishing the dissemination and articulation of the language within the Mayan-speaking community, through usage of virtual spaces like Facebook and the blog, which have consolidated as places where one can find and access the language.

In the end, it's hoped that the initiative will establish a link to new generations of community members, noting that while there has been positive response among youth, more children's participation still needs to be integrated. It has been observed that among the child population (up to 10 years old) there exists an alarming decrease in speakers of Mayan as a mother language, since the majority of children are growing and learning only in the Spanish language, generating an imminent displacement of the local language.