Meet the Newly Born Tulu Wikipedia, the 23rd in a South Asian Language! 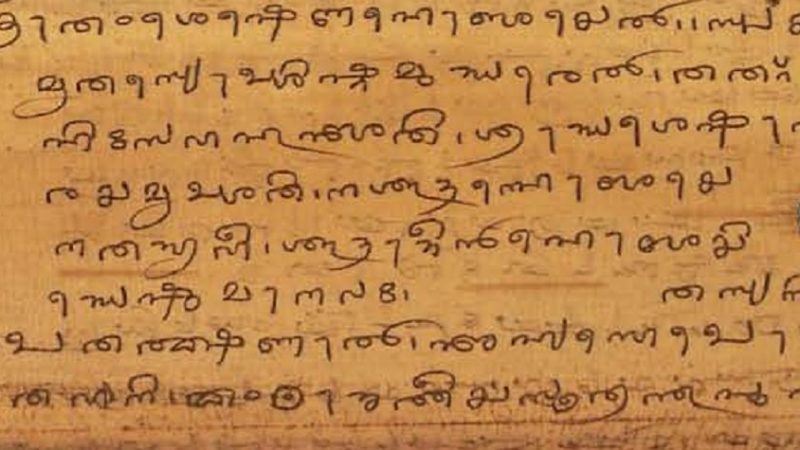 The project waited as long as eight years in the Incubator before becoming the 23rd South Asian language Wikipedia. Available at https://tcy.wikipedia.org, the Tulu Wiki space has a total of 1,285 articles contributed by 198 editors, about 5-10 of which are active with over five edits every month.

The announcement about the project going live was made by Katherine Maher, Executive Director of Wikimedia Foundation during the WikiConference India.

Wikimedia Incubator is a sister project of Wikipedia and before any new language Wikipedia is created, an Incubator project is created and grown by volunteer editors. Once the project gains momentum with more editors developing more content more often, the project goes live as a new Wikipedia project.

The Tulu language is spoken by about three to five million people in the Indian states of Karnataka and Kerala, and there is a sizeable diaspora living in US and the Gulf countries.

Eight years back in 2008, Tulu Wikipedia was created in Incubator with just a handful of editors. But apart from a few sporadic edits every so often, there was little impetus to take the project forward.

A community in a real sense is one that engages in discussion, consensus and collaboration. This never existed for Tulu Wikipedia as individual editors were working in isolation from each other.

There was therefore a need for them to meet and form a strategic plan to grow the community and the Incubator by brining in more active contributors.

In 2014, the need to connect the Tulu Wikipedia editors and foster an interactive editorial group was discussed and a meetup was organized in Mangalore by the Centre for Internet and Society—Access to Knowledge (CIS-A2K) program, a catalytic program funded by the Wikimedia Foundation to support and grow Indian language Wikipedias and Wikimedia projects in the Indian subcontinent.

As an offshoot of that meeting, more community meetups started to happen. A few workshops were organized in Mangalore to provide hands-on training to participants and the city's St. Aloysius College opened its door to include Wikipedia editing as part of its syllabus.

A Wikipedia Education Program was promptly organized for the undergraduate students in this college where students started editing Wikipedia as a classroom assignment and the faculty was involved both in providing training and evaluating the articles.

Vishwanatha Badikana, assistant professor of the Kannada language department at St. Aloysius College, became an active Tulu Wikipedia editor himself and led outreach activities at the institution. His students have enriched the Tulu Wikipedia with articles across a broad range of topics. 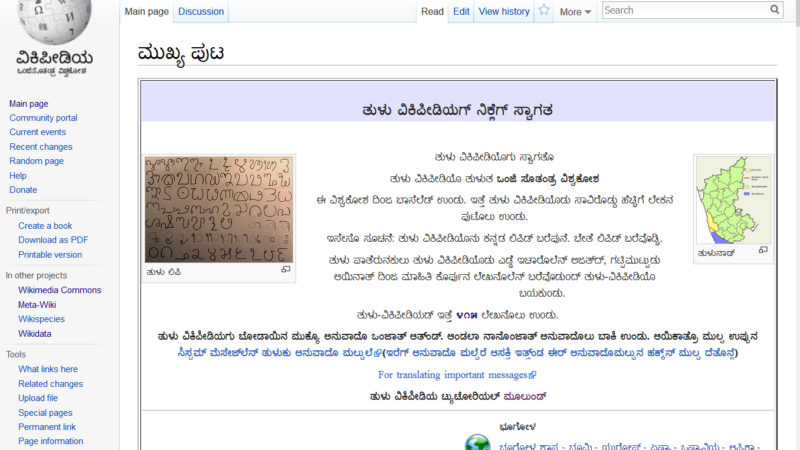 The main page of Tulu Wikipedia. Image via Wikimedia Commons

However, what has been achieved so far is still only the tip of the iceberg. The community is still fairly small and has to grow beyond one supporting institution. The larger Tulu language community also has to take ownership and become stewards in growing Tulu Wikipedia.

Despite its long, rich linguistic heritage, Tulu is still struggling in terms of achieving wider usage in written form, especially in its native script. The lack of promotion is also quite evident as the Karnataka Tulu Sahitya Academy, an official body set up by the Karnataka government uses Kannada and English for its official portal.

The biggest challenge of all is the lack of Unicode support. Unicode is a global standard for scripts, and the Tigalari script that is used to write in Tulu is not encoded in Unicode. At the moment, all the articles in the Tulu Wikipedia are written in the Kannada script as most of the speakers are based in the state of Karnataka, and speak Kannada as a second language.

The only possibility of using Tigaliri script is tied to standardizing the script on Unicode, releasing a freely licensed typeface so that it can be bundled as a web font to display the script in the case of any mobile or desktop user not having the font installed on their device.Finally the script for existing content must be converted from Kannada to Tigaliri.

There is a series of eight how-to video tutorials that have been created to help new and existing editors to learn more about Wikipedia policies and guidelines, style and the editing process.

“Many students have contributed by creating these tutorials,” says Dr. Badikana.

The current set of editors are doing their best to spread the word about the project while safeguarding the core values of Wikipedia.

In an interview to the media portal Daijiworld, Bharathesha Alasandemajalu, an active editor based in Oman said, “Anyone can write or edit articles on Wikipedia Tulu, but it should not be plagiarised [..] Photos should be one's own or uploaded with valid permission from the owner. This will help the future generation to know more about the language and act as a source of information on Tulu language and culture.”

Dr. Badikana moreover shared in an interview with this author that he is hopeful of seeing more Tulu speakers contributing to Tulu Wikipedia, as he feels that growing language content online, combined with work in conventional classrooms, is the best approach to preserving the language.

Subhashish Panigrahi is a programme officer at the Centre for Internet and Society's Access to Knowledge program (CIS-A2K). CIS-A2K worked closely with the Tulu Wikipedia community to bring this project live.